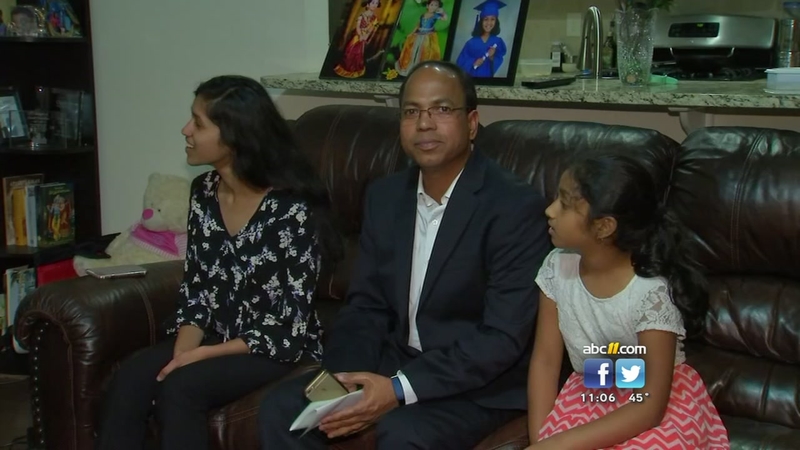 Hi-B decisions leave some in limbo

MORRISVILLE, North Carolina (WTVD) -- With it's heavy concentration of research and development, Triangle tech companies insist H1-B visas are a crucial tool to fill their workforce. With this week's move by the President Donald Trump's administration, those workers will now have a tougher time extending their stays in North Carolina.

H1-B's are issued to very-skilled immigrants. Many come from India. And many of them move to Morrisville to take jobs in nearby Research Triangle Park. Around 30 percent of Morrisville's population is Indian.

Nandu Konduri has lived here since 2007; moving to Morrisville from India with his wife and 6-year-old daughter, Priti, to take a job at LabCorp on a 3-year H1-B visa.

However, after several relatively easy visa extensions, when his current H1-B expires in June, he may face a much tougher path to to stay in the country.

President Trump ordered U.S. Immigration agencies to begin scrutinizing H1-B extensions, like Konduri's, as if the immigrant were applying for the very first time.

A tougher process in the interest of American jobs, says the administration.

With the clock ticking til June, Konduri says he has major concerns.

"Once we don't get the visa, we have to go back; pack our bags and have to leave the country," he said.

His daughter, Priti, listed as a dependent on her dad's visa, has dreams of being a doctor. She has little memory of India as little girl.

"It does (worry me), I honestly did not know about that time period until this past weekend," she said. "I'm in shock right now, but yeah I would be going back to India. I guess I would build my future there - another type of future for myself."

Steve Rao is Mayor Pro-Tem in Morrisville and is also the son of Indian immigrants.

"These are hard-working immigrants that are coming to serve an IT shortage that we have," he said in response to the argument that stricter H1-B rules will help clear the way for Americans to take those jobs.
"There are many many H1B (workers) that are providing the research, developing the drugs, curing the cancer," Rao said. "And so I think it's just not good economic policy for the country."

Dr. Kranthi Sitammagari always keeps his H1-B visa close by. "This is my life," he said showing a digital copy of the visa on his iPhone.

He arrived here from India in 2009, first on a research visa and currently on a H1-B.

The internist at Cape Fear Valley Medical Center says he's got the prescription for relieving the new H1-B limbo: clear the backlog of 1.5 million Indians currently waiting for green cards and permanent citizenship.

"The current projection is that it may take 40 to 70 years. Maybe I will not get a green card before I die," Sitammagari said.

Konduri and Sitammagari have both been waiting years for green cards so they can be done with the uncertainty of their work visas which restrict them from switching jobs or starting their own business.