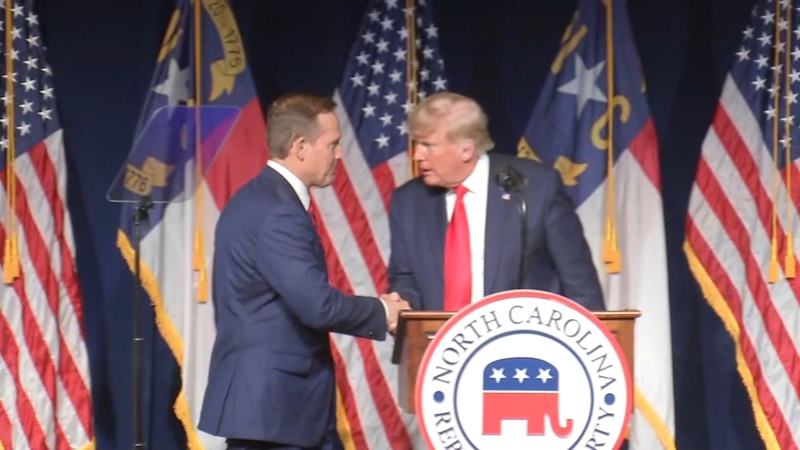 GREENVILLE, N.C. (WTVD) -- In former President Donald Trump's first political appearance outside of his home state of Florida since leaving office, he gave his "complete and total endorsement" to Rep. Ted Budd (R-N.C.) for North Carolina's open Senate seat after Trump's daughter-in-law, Lara Trump, said she would not be running in 2022.

Lara, a North Carolina native, told the crowd Saturday she is keeping the door open to run for the open U.S. Senate seat but decided now was not the time, citing family commitments in her choice not to run.

"Because of the values my parents instilled in me -- they taught me that when you do something, you give 100%. That is the only way to operate. And because of my two kids, who are very young, one and three, Carolina and Luke, it is going to be very hard for me to enter this Senate race right now, but I am saying no for now, not no forever," she said when Trump called her to the stage.

She added, "Just because my name is not on the ballot does not mean I am not fighting every step of the way with you here in North Carolina because if we're being honest, this is so much bigger than a Senate seat. It's about the future of America."

In Lara's place, Trump said he would endorse Budd, of the state's 13th Congressional District. Citing that he didn't "want a lot of people running and then they're going to be disappointed and, in many cases, they're friends of mine."
Budd is one of five Republicans running to replace Sen. Richard Burr, who said he would not be running for reelection in 2022.

"Mr. President, Lara, this means the world to me. Thank you. We got a lot of hard work ahead, so let's win this together, and let's get back to making America great again," Budd said when Trump called him to the stage.

That is a reference to Pat McCrory, a fellow Republican and former governor, who lost gubernatorial elections in both 2008 and 2016. Following those remarks, McCrory released a statement on Twitter, expressing his disappointment and calling Budd a "Washington insider who has done more to oppose the Trump agenda than anyone in this race."

Trump did not directly address his own political future, including a run in 2024, or the deadly January 6th Capital riots. Last week, Senate Republicans blocked a bipartisan probe to investigate the attacks.

Friday, Facebook announced that Trump would be suspended for two years from the social media platform, which was initially implemented over concerns his posts incited violence.

Prior to his remarks Saturday night, small groups of supporters and vendors lined the sidewalks surrounding the Convention Center.

"I just want America back to America. I want it to be back great again and strong. And people caring about their military, and businesses, and employees," said Kyla Hershey, a 15-year old from Beaufort County.

"He was the only one and I think the first one to mention working class," added Martina Patin of Seven Springs.

"Donald Trump's speech tonight is further evidence that the North Carolina Republican Party has fully transformed into the Party of Donald Trump. The NC GOP continues to double down on conspiracy theories, destroy our democracy, and abandon truth to pledge loyalty to one man. They've made clear their only priority is to defend Trump above all else.

"While the GOP circus continues in Greenville, President Biden and North Carolina Democrats in Congress are hard at work delivering for Americans and leading us out of this pandemic. Thanks to the American Rescue Plan, working families bearing the brunt of this crisis received $1,400 direct checks in the mail, funding to get more Americans vaccinated, and the resources to get our kids and teachers safely back to school. President Biden and Democrats are leading us out of this pandemic, boosting our economy, and getting folks back to work, while Republicans have stood in the way at every step."
Report a correction or typo
Related topics:
politicsgreenvillencdonald trumprepublicanschatham county newsperson county newswake county newsnorth carolina news
Copyright © 2022 WTVD-TV. All Rights Reserved.
DONALD TRUMP
Trump WH attorney disputes Hutchinson testimony about handwritten note
Giuliani associate to be sentenced for violating campaign finance laws
Witness: Trump grabbed steering wheel, demanded to go to Capitol
Rep. Miller calls Roe decision 'victory for white life' at rally
TOP STORIES
Biden administration plans to send out thousands of monkeypox vaccines
NC GOP unveils state budget; House backs Medicaid expansion path
NC abortion legal battle looms amid standoff between AG and GOP
FTC sues Walmart over scammers' use of money transfer services
Some pharmacies limiting Plan B pill purchases as demand spikes
FDA advisers recommend updated COVID booster shots for fall
Elmo gets COVID vaccine in new Sesame Workshop PSA
Show More
ABC11 to present Raleigh's July 4th fireworks show at Dix Park
Man accused of killing 9-year-old in Durham on trial in federal court
Police investigating two shootings in Cumberland County
Why you should pay down your credit cards right now
Fort Bragg soldiers reunite with families after deployment
More TOP STORIES News