'This is that rare seat': With primaries finished, candidates turn focus to November 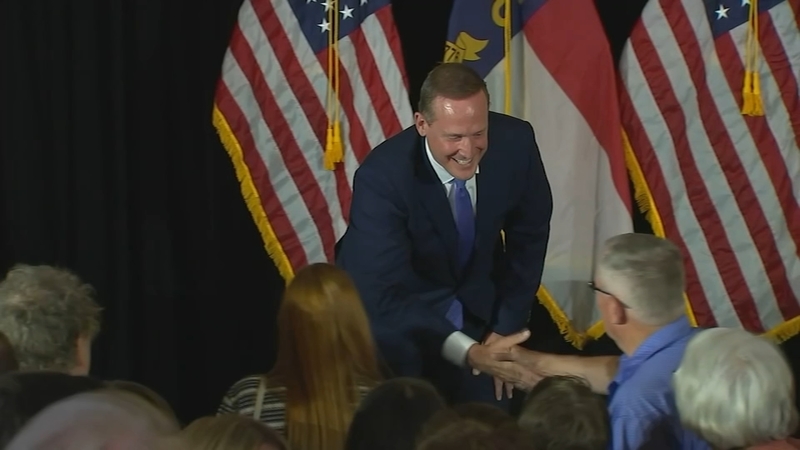 RALEIGH, N.C. (WTVD) -- After a topsy-turvy primary season, one which featured legal challenges to maps and a delayed election, Tuesday night cleared the field, allowing both parties to coalesce behind a single candidate ahead of November's midterms.

"We celebrated with (Cheri Beasley) last night, and we're so proud to stand by her as we do everything we can to flip this seat," NC Democratic Party Chair Bobbi Richardson said, referring to the Senate candidate.

"We saw Republican turnout was very up, Democrat turnout was very down. That to me was telling. I think the enthusiasm gap that we're seeing across the state is very real, and a big advantage going into the cycle," NCGOP Chair Michael Whatley noted.

After Democrats Jeff Jackson and Erica Smith bowed out of the Senate race, Beasley was the presumptive nominee, and has largely raised funds and built support with an eye on November. Tuesday night, she won more than 80% of the vote, celebrating at an event in Raleigh.

Republican Ted Budd faced a stiffer challenge from a number of high-profile candidates, namely former Gov. Pat McCrory and former Congressman Mark Walker. Despite facing criticism for skipping debates, Budd benefitted from an endorsement from former President Donald Trump and steadily pulled away from the pack, cruising to a victory Tuesday night where he gained nearly 59% of the vote.

Beasley and Budd will face off for the seat soon-to-be-vacated by the retiring Sen. Richard Burr, a Republican who has held the position since 2005.

"When you look at how Ted approached the issue sets that we're looking at here in North Carolina, inflation, high gasoline prices, the national security front, border security, on every single one of those issues, he is in step with North Carolina voters," Whatley said.

For her part, Beasley, who previously served as Chief Justice of the North Carolina Supreme Court, is looking to make history as the state's first Black senator.

"In the Senate, she'll put North Carolina first and bring with her the value of hard work, integrity, and justice that have guided her life," Richardson said, adding that the party will emphasize its support of the America Rescue Plan and CARES Act.

With a 50-50 Senate split, North Carolina's Senate race is expected to draw significant national attention and outside spending, especially with no incumbent on the ballot.

"There's every reason to expect for (the party) to be largely united behind him, and for him to be a very strong Republican contender for that race, and I think given the larger political environment, he's got to go in considered the favorite," NC State Political Science professor Dr. Steven Greene said of Budd.

New voting maps, including an additional district, have also brought attention to a number of Congressional races, including NC-13, where Republican Bo Hines will face off against Democrat Wiley Nickel.

"Forever we've been talking about gerrymandering and how that affects things and how most seats are really not up for grabs and are going to be a lock for one party or another. This is that rare seat and it's a new one that really could go to either party. Which makes it really interesting and probably means there's going to be a lot of money invested in this seat. I think both Nickel and Hines are quality competitors, that are not going to be driving people towards their opponents," Greene said.

Traditionally, the party-out-of-power, in this case, Republicans, tends to perform more strongly during midterms, though Greene said a lot can shift between now and November which could sway voters.

"Compared to a typical midterm year, there is more uncertainty. The situation with the economy and inflation are volatile. I think what happens with inflation is less predictable than what might happen with other economic factors that tend to affect elections. What continues to happen with COVID, which is just this thing that is seemingly humming along in the background of what the political impact of that might be," Greene said. "So again, from my perspective, yes right now factors do seem to suggest a good year for Republicans. But I also think there's more uncertainty than a usual year and things really can change."
Report a correction or typo
Related topics:
politicsncprimary electioninflationelectionmidterm electionsnc primary
Copyright © 2022 WTVD-TV. All Rights Reserved.
TOP STORIES
Durham's East End Connector opens after construction delays
Local fans, survivors speak on R. Kelly's 30 year prison sentence
Transgender woman says she was denied job at a NC Catholic school
NC hemp industry gets reprieve, as legislation gets final OK
New UNC Health program addresses support trans community
Disagreements mount as NC lawmakers discuss budget
As Monkeypox cases continue to spread NC waits for additional vaccines
Show More
Raleigh fireworks new view will bring different feel: Mayor
4 charged in deaths of 53 migrants in trailer in San Antonio, DOJ says
1 injured in Durham shooting
NC Democrats respond to Roe v Wade decision
Durham tackles mental health crises in new ways with 'HEARTS' program
More TOP STORIES News