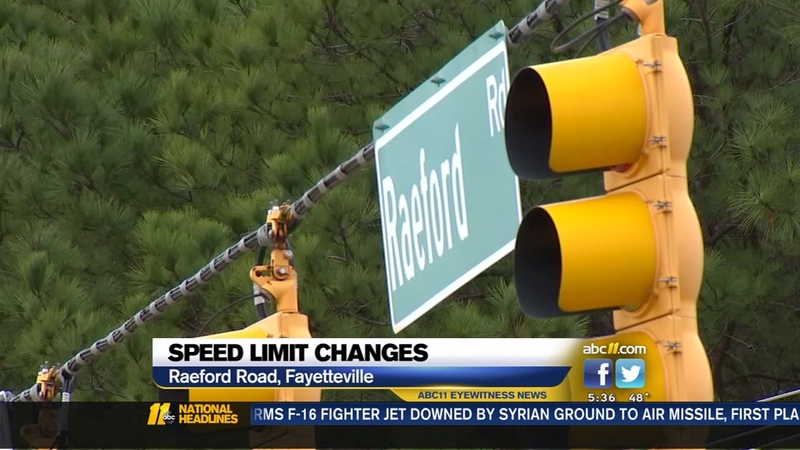 FAYETTEVILLE, NC (WTVD) -- The Department of Transportation hopes a dangerous stretch of highway in Fayetteville becomes a little safer.

The NC DOT was behind a proposed ordinance that would reduce the speed limit on a stretch of Raeford Road to 45 mph beginning at Bunce and Raeford Road and continuing to Bentridge Road.

On Monday evening, the city council approved the ordinance. The NC DOT said it will be at least six weeks before it can change the speed limit signs.

ABC11 spoke with residents and drivers near Raeford Road. One resident told us the busy highway sounds like a race track.

"At night you hear the cars whizzing by obviously not going 55," said Fransisco Castruita.

During the day, the swift-moving traffic of nearly 40,000 vehicles makes it hard for Castruita to get out of his driveway.

"A lot of danger actually getting out of here and having to wait for cars. Whenever I get a chance, I go," Castruita said.

The change might make it easier for him and others along Raeford Road. The DOT said growing traffic volume and increased congestion prompted the ordinance.

"We think 45 mph would be safer and it would be more consistent with most of the rest of Raeford Road through the heart of Fayetteville," said NC DOT spokesman Andrew Barksdale.

However, drivers told ABC11 the change will make congestion worse.

"That will just slow everyone down and mess everyone up. I see no reason to have it lowered," said Ruthie Hemingway.

"An accident at 45 mph will be less severe than an accident at 55 mph," said District 6 Councilman Bill Crisp.

Slowing the speed limit is the latest attempt to tame traffic. Months ago, a new traffic signal went up at the new VA Medical Center on Raeford Road.

There's a red-light camera that sits at Bunce and Raeford Road.

Still, drivers think leaders should put the brakes on the additional safety measure.