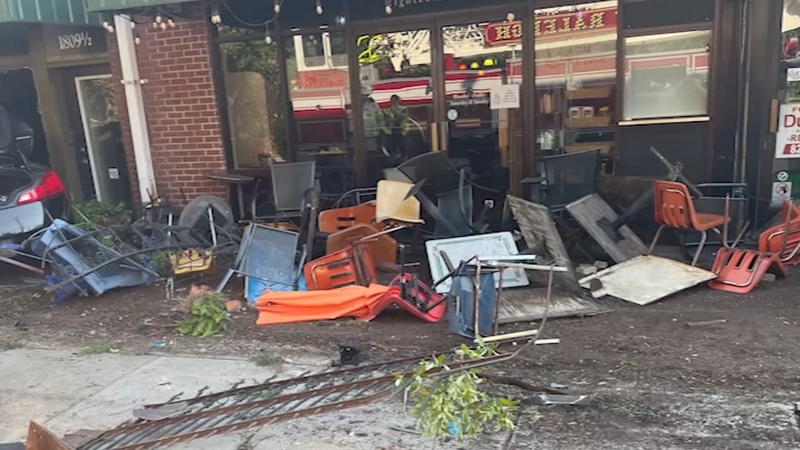 RALEIGH, N.C. (WTVD) -- When David Benson showed up Sunday evening at his business, Third Place Coffeeshop, things were much different than the last time he saw them.

His outdoor seating, along with his neighbor's Lilly's Pizza, was littered all across the sidewalk on Glenwood Avenue. Immediately next door at Leslie Jandrain Art, there was a black Infiniti resting halfway into the art studio with its trunk sticking out onto the sidewalk.

"It was a mess," Benson said. "There was dirt everywhere."

There’s still some cleanup left to finish a day after a driver, accused of racing, jumped the curb before taking out the front of several businesses in Raleigh’s Five Points neighborhood. The art studio where the car crashed into has only been open since March 1. #ABC11 pic.twitter.com/8tdJpFVj31

According to Benson and staffers at Lilly's Pizza, the driver of the car was speeding or racing down Glenwood Avenue before he lost control, jumped the curb, sliced a power pole, and took out the front of several business.

Benson was unsure of the driver's age but said the boy's parents came to pick him up after the crash.

"I'd have kicked his (butt)," Benson said. "He should have stayed here to clean up and that would have been great. I would have patted (the driver) on the back and said 'Dude I'm so sorry.' But I've got no sympathy for him. He didn't say I'm sorry. He was just a kid. A cocky kid."

Normally in the evening hours, diners would be enjoying a meal at Lilly's outside on the sidewalk. Given it was the Fourth of July, the businesses were closed.

Just two years ago, another driver ran the curbside and crashed near the businesses.

"It's been about the same facade for the 20 years I've worked here," said Lilly Pizza's Dwight Hawkins. "Having to clean it up is the hardest part. When you know what it was before. But we'll get it ... it's just exterior damage."

Hawkins said much of the furniture is considered antique or vintage and will be difficult to restore.