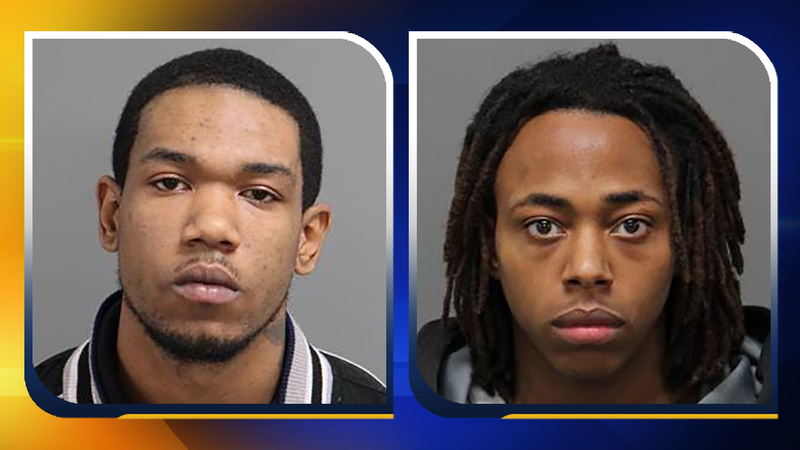 RALEIGH, North Carolina (WTVD) -- In the shadow of downtown Raleigh in a transitional neighborhood, a family was terrorized Thursday night.

The victim, who asked ABC11 to conceal his identity, said he was watching a ball game on TV with his girlfriend, her 4-year-old son, and 7-year-old daughter when there was a knock on the door.

"I open the door. They push me in, tried to push me back in the door, had the gun on me. All right, I'm trying to push them out the door," the man said.

But he said the two strangers got the best of him and pulled him to the ground.

"They start hitting me in the back of the head so I put my hand on the back of my head," he recalled. "So, you know, he's still hitting my hand asking me where's the money."

The man's head and hand were cut and badly swollen.

He identified the man with the gun who pistol-whipped him as 20-year old Saquiwan Diggs.

He said Diggs and an accomplice stole several hundred dollars from his wallet and also took prescription pills and jewelry.

But he said the worst part is that his girlfriend and her children witnessed the crime.

"The 4-year old was really, he was scared. And his sister was terrified," he said. "And it scared my girlfriend really bad. She was really scared too. I was just scared for them because I didn't want them to hurt her and her kids. So I was just doing whatever they wanted me to do."

This afternoon a judge told them both they could face a maximum of 60 years in prison.

The suspects were caught at the scene before they could get away according to the victim, who told ABC 11, "The police responded so fast they couldn't get away."

That response was thanks to another tenant in the house who heard the commotion.

"The only thing I knew I could do was call the police. The police got here amazingly fast. Thank God. I mean they really did do an amazing job," said the neighbor, who also didn't want to be identified.

He said while he felt sorry for his neighbor who was beaten the worst part was hearing the terrorized children.

"Kids shouldn't have to go through stuff like that. It's bad enough that people feel like when you are of age they can rob you, take stuff from you, stuff like that. But when you have kids involved it's just detrimental to their development," the neighbor said. "There's no telling how this will affect those kids, how it will affect them later in life, whether they're going to be scared, defensive. You just never know. That's the biggest thing about this is people have to know that this is not OK."

ABC11 has decided to slowly reduce the number of stories on the website that have a comments section. We believe very strongly that our audience should have an opportunity to discuss and debate events in our world, however, we have not been able to moderate the comments as well as we would like. Instead of hosting a platform that could allow a few loud and ugly voices to dominate a conversation, we want to encourage everyone to join us on our social media platforms and speak out there. Facebook: facebook.com/ABC11 Twitter: twitter.com/ABC11_WTVD
Report a correction or typo
Related topics:
raleighwake countyhome invasionwake county newsraleigh newsarmed robbery
Copyright © 2021 WTVD-TV. All Rights Reserved.
TOP STORIES
Toyota to build lithium battery plant in NC
Raleigh Police plan to crack down on speeding drivers
Durham, Zebulon make political history with new mayors
NC unemployment improving but businesses still struggle to hire
LATEST: NC cases trend upward; Wake Co expands testing appointments
Carrboro police investigate 2 weekend shootings
Show More
Full NC Appeals Court rejects filing delay in key political races
Actor Jussie Smollett takes stand in own defense
COVID vaccine mandate announced for NYC private-sector workers
'Persistent inflation' predicted ahead of busy holiday shopping season
Fayetteville man wins 2 jackpots after accidently buying ticket
More TOP STORIES News