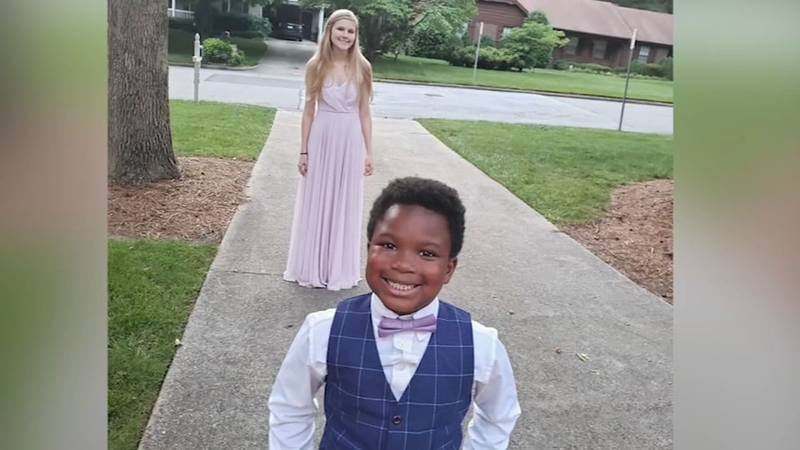 Seven-year-old Curtis Rogers of Raleigh threw a special event for his nanny, who was denied her senior prom because of the COVID-19 pandemic.

"I planned it out because Rachel probably wanted to see me a lot," Curtis said. "She also is one of the best people I've known."

Curtis who hadn't seen his nanny, Rachel Chapman, in two months because of COVID-19, wanted to throw her a prom.

"I was kind of like bummed putting my dress on because I was sad; I don't get to wear it to my senior prom," Chapman said. "After leaving it and having that time with him because it was the first time I had seen him in two months, it was like, really fun, and I'm really glad that he did that."

"He was very excited and wanted to make sure everything was just right and get his suit on and pick out his bowtie that matched her dress," she said. "It was really cute. He was really excited for it to start and make sure he was ready to impress her."

Curtis had the whole night planned out from their favorite after-school snack -- peanut butter and apples -- as an appetizer to using a pool noodle to maintain a safe social distance and having Google serve as the DJ playing Rachel's favorite songs.

"First he was waiting outside when we got there with the pool noodle and then he led me into the backyard," Rachel said. "He had all my favorite foods and everything. I could tell he put a lot of thought into it."

"They're awesome together," Elissa said. "They have tons of fun. She's really become a special part of our family. We love her. She's awesome."

"Rachel is one of our favorite people and she also helps around the house a lot," Elissa said. "So, Rachel's like the best nanny ever."
Report a correction or typo
Related topics:
societyraleighcoronaviruscool kidsall goodabc11 togethergood newspromfeel good
Copyright © 2022 WTVD-TV. All Rights Reserved.
TOP STORIES
2 to 3 inches of snow possible in Triangle
Voting bill collapses, Democrats unable to change filibuster
'We can't get any more': Stores struggle to restock shelves
Third arrest made in Black Friday shooting at Streets at Southpoint
Daniel Turcios shot 5 times after crash on I-440, RPD reports
NC legislature votes to further delay primaries until June 7
'He was special': Durham friends remember Andre Leon Talley
Show More
Cumberland County mom spins way to $500,000 lottery prize
Victim in fatal I-85 crash was just 3 months old
19-year-old military driver charged in wreck that left 2 Marines dead
Earnhardt Jr. to be inducted into NASCAR Hall of Fame
Raleigh man feels lucky to be alive after bullet found above his bed
More TOP STORIES News