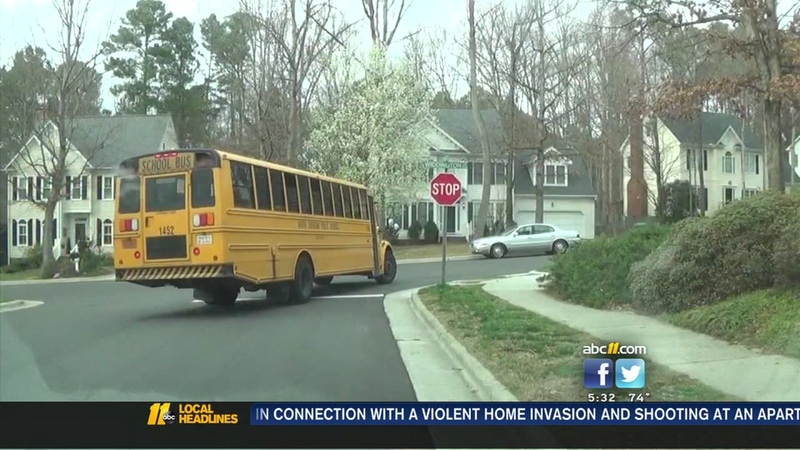 Are speeding school buses a problem in Wake County?

"I don't know if they're running late or why they're going so fast, but they come speeding up our street," Warnock said.

ABC11's camera was rolling Tuesday afternoon as a WCPSS bus hit its brakes at the stop sign on Parkgate Drive at Widdington Lane. Though it didn't come to a complete stop before turning right, Warnock said it was another bus bound for David Drive Elementary that morning that had her concerned.

"I was worried about the safety of the children," said Warnock after she saw the back end of the bus bounce over the speed hump in front of her house.

"I just didn't think there was any way that she could've stopped at that stop sign and she didn't," said Warnock. "She did not come to a complete stop."

Another concerned parent called police to report what they saw. By the time school was out Tuesday afternoon, two Cary police officers were patrolling the neighborhood, ready to clock any buses driving too fast.

A school district spokesperson said all safety complaints are taken seriously and that the driver in question is retiring; Tuesday was her last day.

Still, Warnock says she's seen too many practicing bad driving behaviors as does an eyewitness who shared a photo of a WCPSS bus blocking the intersection of Morrisville Carpenter Road and Town Hall Drive in Morrisville on Monday morning.

That same day, yet another Wake County parent following his child's school bus headed for Raleigh from Fuquay-Varina along Sunset Lake Road claims the driver was breaking the speed limit.

Joseph Fennell used his cell phone to record video of his own speedometer.

"I was thinking that this is ridiculous that this bus is going 15 over the speed limit with a bus full of children on there, especially my child on there," he said.

Fennell, like other concerned parents, are left wondering what it will take to ensure all bus drivers follow the rules of the road.

"I just want bus drivers to slow down and pay more attention and remember there's children at stake," Warnock said.