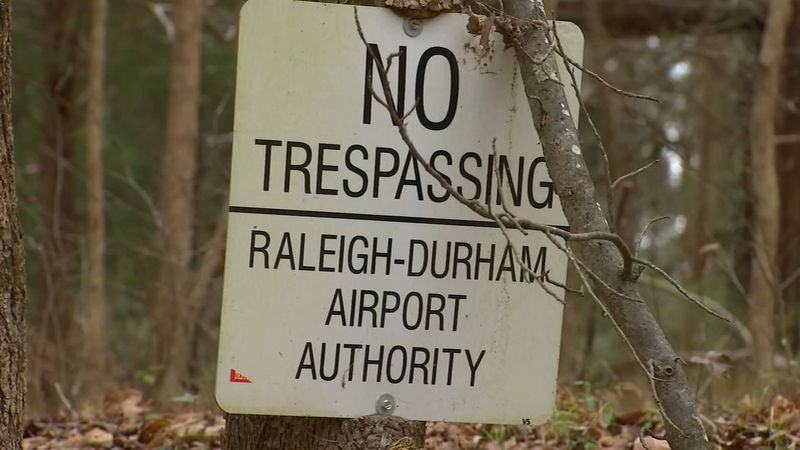 RALEIGH, N.C. (WTVD) -- Raleigh-Durham Airport Authority said it needs to build a fence around RDU property to keep trespassers out.

Bill Sandifer, the COO of Raleigh-Durham Airport Authority, gave a presentation Thursday about the need for the fence.

"The airport has documented evidence of environmental violations caused by trespassers hiking and biking on airport property. The only way to remediate the damage and prevent further erosion is to keep trespassers off the property," Sandifer said.
He said trespassers are using illegal trails on airport land and building bridges there. He said the fence would also enhance airport security.

"Those trails have cost significant environmental damage on our property and the trails need to be removed and remediated," Sandifer said.

Activists have pushed back against the fence proposal, saying it would cut off access to Umstead State Park.

"Certainly the fence just seems like another blow to our way of life here," said Matt Thompson, an advocate with the group RDU Forest. "And I'm hopeful we can work out an amicable solution with the airport and move things forward in a positive direction. When I saw that map it was pretty crushing."

Sandifer: RDU is working with @NCparks to find a solution that does not block access to the multi-use trail that crosses airport property, which will likely require the trail to be realigned.

Those same activists have been fighting the airport's plan to allow Raleigh-based Wake Stone Corporation to expand its current rock quarry into a 105-acre plot of airport land.

Wake Stone has agreed to provide funding for leasing airport land for mountain biking recreation and reclaiming the 105-acre site at the end of its long-term lease to include recreational features.

"We have come up with a proposal that provides an economic benefit for the airport and a compromise solution that provides for recreational opportunity for these mountain bikers and people that are opposed," Wake Stone Corp. Pres. Sam Bratton said.
Sandifer said he doesn't want to cut off access to Umstead State Park.

Raleigh-Durham Airport Authority Board of Directors met Thursday and could consider the fence during their next meeting in January.

Members of RDU Forest were at the meeting. They oppose the fence, saying it's unnecessary.

"We are frequent users of the airport. We want this airport to be safe," said Natalie Lee of RDU Forest. "Them saying they need a fence to make it secure is not true. There's already a fence around the appropriate parts of the airport. This land is surplus land."