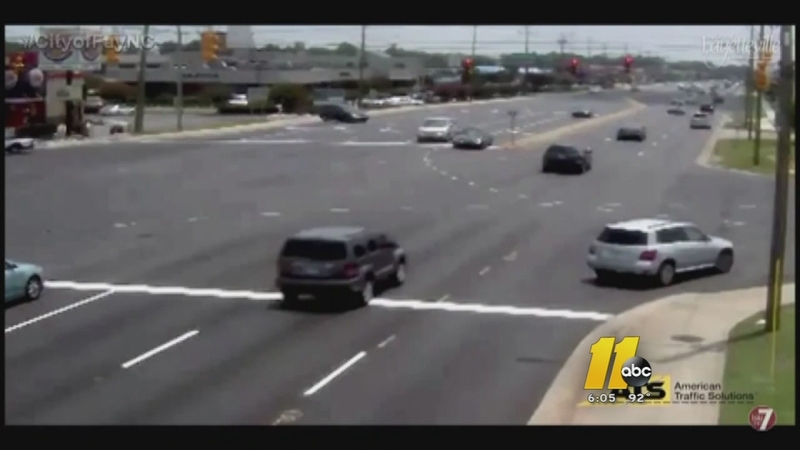 FAYETTEVILLE (WTVD) -- The City of Fayetteville has released "Round Two" of video from its red light camera program, clearly showing drivers running red lights. In some cases, those drivers nearly cause serious accidents as they force other drivers to swerve and brake unexpectedly.

"We've seen in previous weeks, since we've had dialogue on Facebook and talking with others, that they don't think it's a problem," said Kevin Arata, the city's director of corporate communications. "You look at these videos, it's a problem."

Arata said his department will continue to release footage from American Traffic Solutions, the city's vendor in the red light camera program that made a comeback last month. There are currently five cameras in four major intersections around the city. Another set of cameras is expected to be installed at other intersections next month.

In the first two weeks of the program, the city reports ATS mailed out 268 civil citations. Each citation fines drivers $100. They have a chance to pay or contest the citation with ATS in a new office that opened Monday at 200 Dick St.

The city notes ATS is currently reviewing another 657 incidents that will likely result in citations. In most cases, the violations are clear and disturbing.

"They had clocked somebody doing 72 [mph] in a 45 [mph zone] to get through a light," Arata said. "It's not that important to run a light to risk the lives of you and the lives of others."

Arata hopes the continual release of videos to the city's YouTube page will encourage drivers to think twice, and change dangerous driving habits.

"It makes people think those cameras could be anywhere," said Arata. "And if they're not stopping because it's the law, then they're stopping because they're fearful of citation coming their way to the tune of $100."