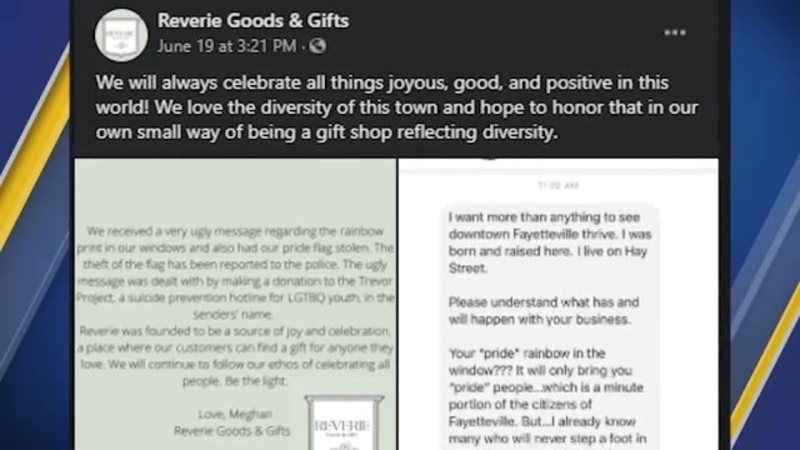 Fayetteville business gets a ton of support after LGBTQ flag stolen

FAYETTEVILLE, N.C. (WTVD) -- When Meghan Reed walked into her month-old business in downtown Fayetteville on Saturday morning, she wasn't expecting a missing rainbow flag nor a hateful Facebook message.

The Fayetteville local opened up Reverie Goods and Gifts in May with the help of her husband, Jeremy, eager to join the close-knit downtown community along Hay Street.

The person who sent the Facebook message told Reed that by showing pride, "it will only bring you 'pride' people...which is a minute portion of the citizens of Fayetteville," the message read.

It goes on to say: "I already know many who will never step a foot in your store any...not just during 'pride month' but long after this month has passed." The sender mentioned, "no one walks around touting "hetero" pride and it's just ridiculous," ending the Facebook message with "so remember...every action has consequences. I wish you the best but am sorry for you. I was soooo hoping for your success."

Reed said that she was in disbelief by what she read.'

"To go out of your way to be hateful was shocking and then the shock turned into anger," she said.

A few hours after reading the message, Reed gave a worded response, calling out the sender.

"All you had to do was choose to not shop in my store." the message states. Reed went on to tout her business motto of being a place of positivity and celebration, telling the person that "we will continue to celebrate all holidays, all people, and all things good in this world."

Reed also told the sender that she donated money to the Trevor Project, a suicide prevention hotline for LGBTQ youth, under that person's name.

"We are an ally, we love the diversity," Reed said.

She then posted the Facebook message interaction and her own statement to the store's Facebook page where it quickly garnered national and international attention from people in Michigan, Texas, and even Canada.

"The response then quickly turned into people buying everything rainbow that we have in the store," Reed said.

Since Saturday's post, Reed says her online sales have skyrocketed 700 percent and she is now out of rainbow merchandise.

"People are inherently good. People, there are so many wonderful people in this town," Reed said.

Reed hopes the person who sent the hateful message will have a change of heart; but no matter what, she plans to run a business filled with love and acceptance.

"We love the beauty in the diversity of downtown," Reed said.