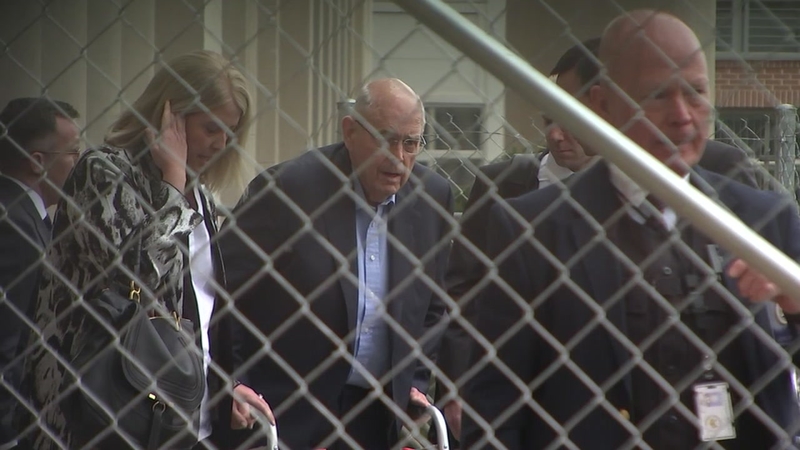 NCGOP chair among those indicted in corruption probe

RALEIGH, N,C, (WTVD) -- The chairman of the North Carolina Republican party was indicted on corruption and bribery charges less than 24 hours after announcing he would not run for re-election.

Robin Hayes, a former five-term Congressman and current NCGOP Chairman, is one of four people named in the unsealed indictment. The other alleged conspirators include Durham businessman Greg E. Lindberg (founder and Chairman of Eli Globall LLC and owner of Global Bankers Insurance group), John D. Gray (a consultant for Lindberg), and John V. Palermo (Chairman of the Chatham County Republican Party and Eli Global executive).

According to The Associated Press, Lindberg has given more than $5 million to North Carolina candidates, party committees and independent expenditure groups.

"The indictment unsealed today outlines a brazen bribery scheme in which Greg Lindberg and his co-conspirators allegedly offered hundreds of thousands of dollars in campaign contributions in exchange for official action that would benefit Lindberg's business interests," Assistant Attorney General Benczkowski said. "Bribery of public officials at any level of government undermines confidence in our political system. The Criminal Division will use all the tools at our disposal -- including the assistance of law-abiding public officials -- to relentlessly investigate and prosecute corruption wherever we find it."

Bob Philips read the indictment with a mix of shock and sadness.

"You're a bit taken aback when something like this occurs," said Philips who serves as executive director of Common Cause NC, a good-governance group promoting the need to end big money in politics.

Phillips told ABC 11 that Greg Lindberg's massive political donations have been on Common Cause's radar for some time now.

"(Lindberg) was the largest campaign contributor in North Carolina. Everybody wondered what it was about. I guess in some ways we're not surprised. But, it's still shocking," he said.

Politico is reporting that Walker is the mystery man identified in the indictment as 'Public Official A'; alleging Walker's political committee took $150,000 from Lindberg to pressure Causey to replace his deputy at the Insurance Department.

All four of the men were in federal court in Charlotte on Tuesday morning.

MORE: Indictments were filed March 18, but only unsealed today - a day after @NCGOP announcement that Chair Robin Hayes would not seek re-election at 2019 convention. Reminder, 2020 @GOP convention will be in Charlotte. @ABC11_WTVD @ABC @JTHVerhovek

"Early this morning, the North Carolina Republican Party was made aware of several indictments surrounding the conduct of a major donor to both major political parties and two of his associates," North Carolina Republican Party Counsel Josh Howard said Tuesday afternoon in a statement. "The Party has been cooperating with the investigation for several months, including staff members providing statements and responding to various document requests. The Party, which has its day-to-day operations managed by professional staff under the direction of the NCGOP Central Committee, remains fully operational and focused on its mission at hand."

According to investigators, Mike Causey -- the Republican elected in November 2016 as North Carolina's Commissioner of Insurance -- reported concerning political contributions to federal investigators in January 2018.

Investigators said they then uncovered a scheme involving Lindberg, Gray, Palermo and Hayes to bribe and influence Causey. The scheme included individual expenditure accounts and improper campaign contributions designed to get Causey to take official action that would benefit Lindberg's company.

The unsealed indictment alleges that the conspirators offered Causey millions of dollars to remove a deputy commissioner in charge of overseeing regulation and periodic examination of Lindberg's company.

Hayes also faces criminal charges of lying to the FBI. He announced Monday he would not seek re-election as NCGOP Chairman, saying complications from a recent hip surgery forced him to change his mind.

"I know these men and consider most of them friends. I have read the indictments and they are very troubling," said Lt. Gov. Dan Forest, a Republican. "I believe in the presumption of innocence and thus will withhold judgment. But I agree with the rule of law and if laws were broken, then justice should be served. They are facing serious charges."

The FBI is in charge of the investigation and said it remains open and active.

For Phillips, all of it adds up to one more reason to return to public financing in North Carolina politics.