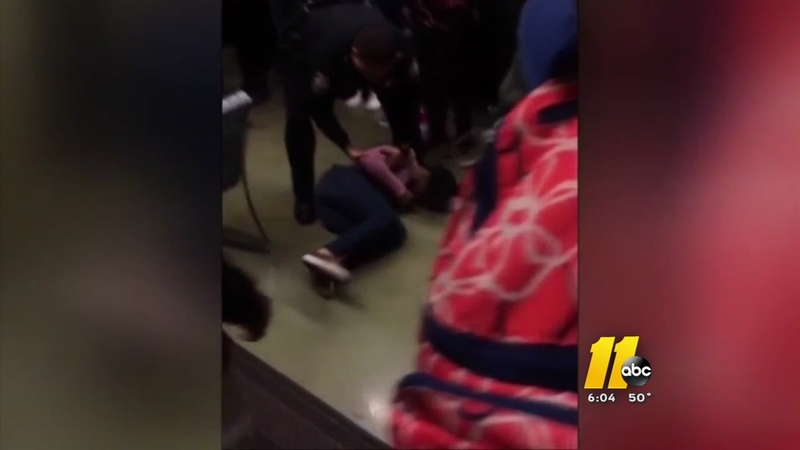 ROLESVILLE, North Carolina (WTVD) -- Desiree Harrison said she doesn't feel her daughter, 15-year-old Jasmine Darwin, is safe at Rolesville High School. She said her daughter now has a concussion and she plans to take her out of the school.

Video sent by an ABC11 Eyewitness shows Darwin being picked up and thrown to the ground by school resource officer Ruben De Los Santos. A second, longer video sent in shows a dramatic fight between two girls which led up to the incident.

In the original 8-second video, a group of students were congregated in an area and then the officer slams the girl on the floor. Police said there was a fight at the school Tuesday morning.

Harrison said one of her daughters was involved in that fight and her other daughter, Jasmine was trying to defend her sister and break it up when administrators can be seen intervening.

The second video, sent in by another eyewitness, shows two girls fighting each other, eventually ending up on the floor. The girls were throwing punches, kicking, and clawing at each other.

An eyewitness said the girl who was thrown to the ground was later involved, but was trying to break things up. Police have not confirmed that information, but Darwin's mother gave the same account.

Harrison said the school called her this morning to notify her about her daughter being involved in the fight, but not about her other daughter and what happened with the officer. She said she didn't know about it until after school.

@ahunnaaa_ Thank you for sharing this with us. We are working with Rolesville Police Department to investigate.

The second eyewitness who sent the longer video of the fight, Aisha Nasser, said she didn't think De Los Santos meant any harm.

"He's one of the kindest officers I've ever come across," said Nasser. "Seeing the whole situation first hand it was out of control and he was just trying to gain control of the situation and I know it wasn't his intention to hurt that girl."

ABC11 Eyewitnesses sent in videos of a fight at Rolesville High and an officer slamming a girl to the ground.

"We will work diligently to review any and all pertinent information so that we provide an accurate account of the events," Chief Langston said, reading from a press release. "We ask the community and all members involved to be patient while we investigate this matter."

Disturbing use of force at #rolesvillehigh that should never be used against kids in schools. Contact us if you have info about incident.

Police have asked the State Bureau of Investigations to conduct a third-party review. In an effort to remain transparent and accountable, Rolesville Police said Saturday that Langston has requested that the Wake County Sheriff's Department take the lead role in the investigation.

Lisa Luten, a spokesperson for Wake County Public Schools, said they are aware of the situation.

"We are in the process of working with Rolesville Police Department to gather all of the details around this incident," Luten said.

After De Los Santos threw the girl to the ground, he led the girl off with her arms behind her back.

Wake County Public Schools responded on Twitter to the student who posted the video. They said they are working to investigate.

"The safety of our students is always our first priority," Lassiter said. "Our school district works with many dedicated officers who protect our students. It is vital that our children have a positive relationship with these law enforcement officials. Those relationships are built on mutual respect.

"I understand this incident brings up questions and conversations about the manner in which we keep students and staff safe in our schools. We will continue to be in conversation as we learn additional information."