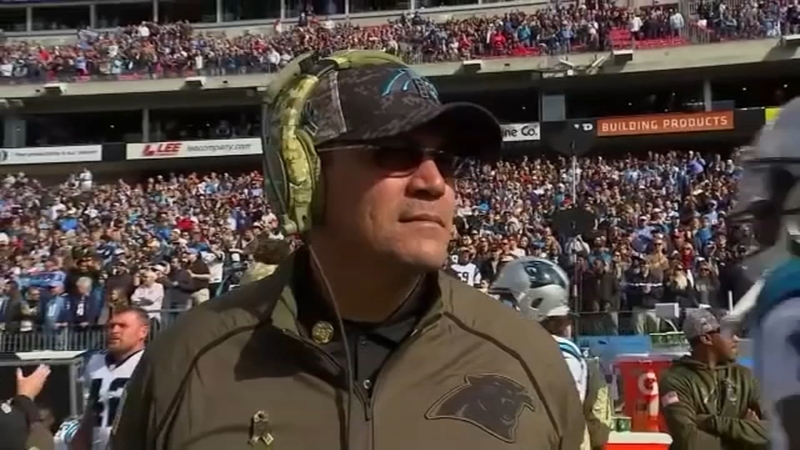 Rivera to face Panthers for first time since being fired

"Keep Pounding" -- a phrase used by the Carolina Panthers honoring the late Panthers player and coach Sam Mills -- is one that has stuck with former coach Ron Rivera even his tenure in Charlotte ended -- during some of his most challenging days.

"Yep, it's funny because some of the former players I had, they would use that, and that was cool," Rivera said. "Some of them would use the sayings I used with them, about the attitude, preparation, and effort, and someone would tell me, 'Coach, it starts with your attitude today, Keep Pounding.'"

Rivera, who is in his first season with Washington -- was diagnosed with cancer in August and spent time undergoing treatments but never missed a game. He said the support both near and far made all the difference.

"When you go through something like I went through, getting a message, whether it's a text message, an email, a voice mail, that means the world," he said. "I really appreciated the thoughts and prayers from everybody out there."

Rivera will face his former team on Sunday for the first time since being fired. He said this isn't a revenge game; his focus is on his current team, Washington, which has a chance to clinch the NFC East.
Report a correction or typo
Related topics:
sportscharlottenccarolina pantherswashington redskins
Copyright © 2022 WTVD-TV. All Rights Reserved.
TOP STORIES
Winter storm impacts reduced, shifted east
Gov. Cooper to speak ahead of NC winter storm
'We can't get any more': Stores struggle to restock shelves
Voting bill collapses, Democrats unable to change filibuster
Suspect captured in killing of woman, 24, working at furniture store
Third arrest made in Black Friday shooting at Streets at Southpoint
By the numbers: Stats that tell story of Biden's first year
Show More
Daniel Turcios shot 5 times after crash on I-440, RPD reports
NC legislature votes to further delay primaries until June 7
'He was special': Durham friends remember Andre Leon Talley
Cumberland County mom spins way to $500,000 lottery prize
Victim in fatal I-85 crash was just 3 months old
More TOP STORIES News