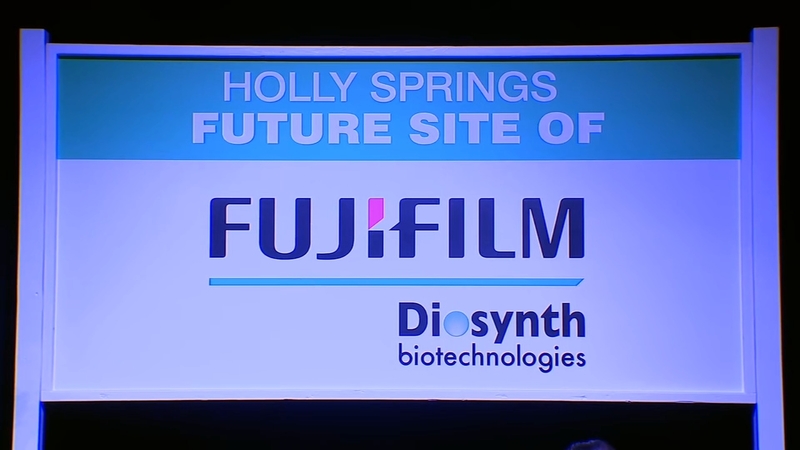 Cooper was in the Wake County town to make the announcement and said the new facility will create 725 "good-paying jobs."

"In the midst of a global pandemic, North Carolina is finding opportunity ... we are seeing strong job growth," Cooper said. "Today is another shining example of that."

The facility will complement FujiFilm's existing facility in Morrisville, which manufactures more than 60 different products, including a prostate cancer treatment.

"Our aim is to ...develop and manufacture vaccines and therapies for patients all around the world," said Martin Meeson, FujiFilm Diosynth CEO.

The $2 billion project will be the largest life sciences investment announcement ever in the state of North Carolina.

"We're excited for FujiFilm Diosynth Biotechnologies to grow its worldwide presence in our community," said Wake County Board of Commissioners Chair Matt Calabria. "The company's decision to expand here proves that, despite the economic challenges brought on by the pandemic, Wake County's talent pool, infrastructure, and high quality of life continue to attract new businesses that offer good jobs for our residents."

Construction of the new facility, which will be at Oakview Innovation Business Campus, is scheduled to begin immediately. When it opens in 2025, the facility will develop, produce, package and ship medicines approved by the Food and Drug Administration and other regulatory bodies across the country and around the world.

"We are delighted to be a part of the Holly Springs community, as we partner together to bring life-impacting therapies to patients. The commitment of the town to support business growth while embedding environmental sustainability are aligned with our long-term goals. We are looking forward to growing together for many years to come," Meeson said.

The project is expected to infuse $2.6 billion into the Wake County economy with $1.6 billion of that going directly into the Holly Springs economy by the end of 2025, according to an economic impact report commissioned by both the Town of Holly Springs and Wake County.

This partnership with FujiFilm Diosynth Biotechnologies reflects the town of Holly Springs' intentional long-term commitment to bring high-quality jobs to our community while growing our local economy," said Holly Springs Mayor Dick Sears. "This landmark economic development announcement solidifies Holly Springs as an international destination for life sciences manufacturing. We are thrilled to welcome a global leader like FujiFilm Diosynth Biotechnologies to our community."

Tillis said he recently spoke to Meeson and advocated for North Carolina as an ideal site for the new facility.

"FujiFilm's investment should be a model for future economic development pursuits across North Carolina - leveraging federal, state, and local officials, as well as private sector partners, and working together to land transformative projects for working families in North Carolina," Tillis said.

Earlier in the day, Cooper was part of an announcement that Google Cloud would make Durham one of its top 5 engineering hubs.