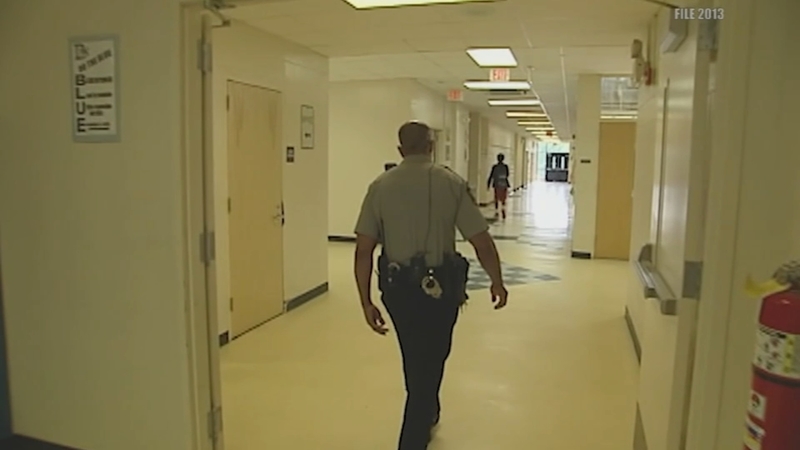 Wake school board votes to keep police in schools

CARY, N.C. (WTVD) -- Wake County School Board members requested a district-wide security assessment long before Uvalde, but the school massacre in Texas was certainly top of mind tonight as the board heard an overview of the assessment and voted on whether to keep police officers in county schools.

With the horror of Uvalde fresh in their young minds, a pair of Wake elementary schoolers took the mic during public comment at district headquarters...

"The fact that people go into school and kill kids is absolutely unacceptable," said fourth-grader Emily Mead. "Students are in terror because of this. No one knows when the next one will be and where it will be."

Fifth-grade student Claire Stoekel added, "Sometimes I wonder if someone will come into my school with a gun. I worry that my teachers and my classmates could get hurt."

Tuesday night, the school board worked to reassure parents and students. The district's Office of Security gave an overview of its work to coordinate safety protocols on Wake campuses and an overview of a years-long review.

The discussion in Cary came hours after damning testimony at the State House in Texas where the state's top law enforcement official called the Uvalde school police response to the mass shooting an abject failure.

Wake school board members asked what the police response would be like here.

"I'm not going to armchair quarterback what happened down in Texas," said Russ Smith, senior director of WCPSS Office of Security. "If something happens at one of our schools, there's going to be multiple responders. And typically the agency whose jurisdiction it is is going to be taking the lead. So if it happens in Raleigh, then most likely Raleigh is going to take the lead."

The school board voted in favor of keeping police officers inside district schools. The panel approved new contracts with Raleigh, Apex, Cary and Garner police to provide school resource officers for the next school year. It's working to finalize contract deals with the county's other police forces.

The move came despite some calls from critics who argue the district's safety priorities should not be more police -- but more counselors, social workers and psychologists.

"We've seen multiple times, that student resource officers don't improve the safety of our schools," Kris Nordstrom of NC Justice Center told the board. "They don't stop school shootings. We've seen that in Texas. We've seen that in Florida. Instead what they do is increase the number of suspensions and arrests of students, particularly Black students."

District surveys found that most parents and staffers support keeping officers inside the schools.