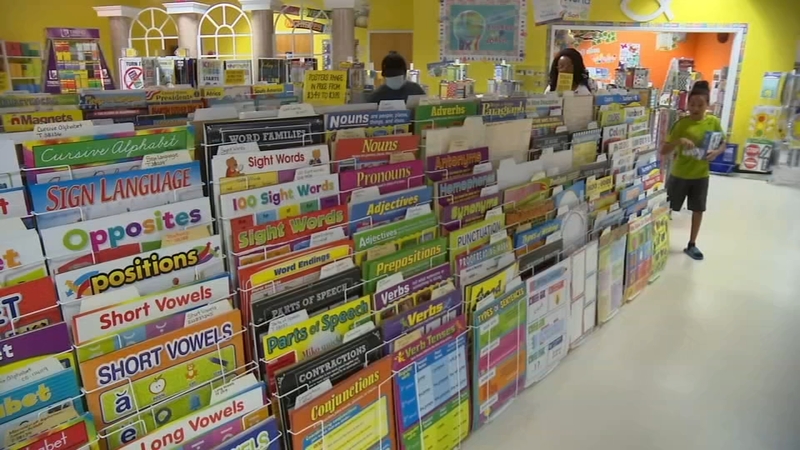 RALEIGH, N.C. (WTVD) -- As the beginning of the school year approaches, many students will find themselves in a physical classroom to start this school year. Last year, the classroom was virtual. Fast forward 365 days and there is an increase in demand for items that saw little use last year; backpacks, sneakers, and stationery -- to name a few.

Every year, and we've been doing this for 30 years, every year there are certain items that companies will sell out of." said Chad Weisbrodt of Raleigh's The "Teach Me" Store.

According to retail experts, manufacturers and vendors are still struggling to keep up with the demand amid continued pandemic-related challenges, such as staffing and a reliance on other stakeholders in similar situations.

"The stuff that I ordered three-to-four weeks ago is selling out as soon as it hits," Weisbrodt said.

Weisbrodt caters to children, teachers, and parents alike, with educators being his main customer base.

"And stuff I have to order to replenish those items is coming in right before back to school season," he said.

While Weisbrodt said his store doesn't necessarily see the traffic that large retailers such as Walmart and Target experience, the "back-end" process is much of the same, as seen in other industries.

"We've always had the niche with the teacher market. So that's what we focus on now. With the caveat that we do have some specialty back-to-school items that teachers request, and they'll specifically send students our way if it's something they don't carry. That's usually something you won't find elsewhere," Weisbrodt said. "I see no reason for concern."
Report a correction or typo
Related topics:
educationraleighback to schoolonline learningcovid 19 pandemic
Copyright © 2022 WTVD-TV. All Rights Reserved.
TOP STORIES
With Roe dead, some fear rollback of LGBTQ+ and other rights
Where abortion rights stand in NC after Roe v Wade decision
Brian Laundrie confession letter released: 'I ended her life'
Supreme Court overturns Roe in landmark case on abortion rights
False claims about abortion after Roe v. Wade case
Biden vows to 'do all in my power' to protect abortion access
NC politicians react to Supreme Court overturning Roe v Wade
Show More
Congress sends landmark gun violence compromise to Biden
How personal data could be used to enforce anti-abortion laws
How outlawing abortion could worsen maternal mortality crisis
How does overturning Roe v. Wade affect IVF treatments?
FULL TEXT: Read the Supreme Court opinion
More TOP STORIES News