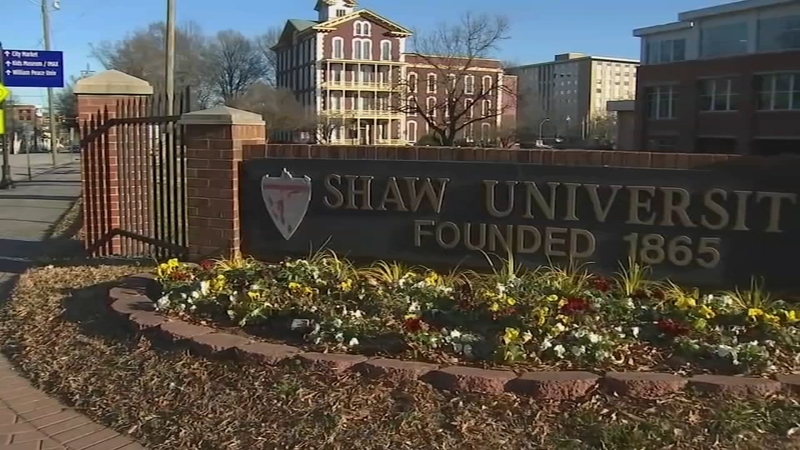 RALEIGH, N.C. (WTVD) -- Shaw University is a gateway to downtown Raleigh -- but it also has been historically under-resourced and is fighting an increasingly tough competition for new students. Luring those new students requires money. A new plan, unveiled to the residents Monday night is aimed at generating just that. Now, Shaw is trying to get its neighbors on board.

Downtown Raleigh's re-emergence is rising all around the 156-year-old institution: Shimmering new high-rises; Construction cranes in place to build more and a development-friendly city council re-zoning lots of downtown land to grow taller and denser. Monday's community forum on campus was a chance for the HBCU's neighbors to learn more about the school's plan to get in on the real estate boom.

"What we're doing now is trying to lay the groundwork to understand what makes the most sense," said Dawn Pitts, a director at Hayat Brown, a national real estate engineering and advisory firm, which is advising Shaw on ways to leverage its most valuable asset -- its land.

The university does not intend to sell its increasingly valuable land but has plans to lease it to developers for new construction that benefits students and the community. Perhaps a new food hall or residence halls for students and office space that may look like Red Hat tower down the street or the new Pendo tower around the block. Places where Shaw students could intern and learn.

"What better way for the university to grow and train the next workforce than to have facilities that look like the entities that you want them to go work for," said Shaw University President Paulette Dillard.

Raleigh resident and Shaw alumnus Eugene Myrick was one of the more vocal skeptics in the crowd. He expressed his concerns about past mismanagement by university officials. He openly wondered why his historically black alma mater would position itself to be reliant on what he suspects will be mostly-white developers

"Why would I trust this administration? The same board of trustees that's been here for 30 years," Myrick told ABC 11 after the meeting. "If we're here to educate students we need to educate students. We don't need to be building 40-story high rises so other people can get rich from Shaw University's property."

Raleigh’s Shaw University, the oldest HBCU in the south, unveiled an ambitious new plan to reimagine its aging downtown campus by leveraging its most-valuable asset: its land. Shaw’s vision + concerns from neighbors and alum at 11. #abc11 pic.twitter.com/e4T0tTVCMj

"I'm still debating (how I feel)," Cauthen said. "I feel better that Dr. Dillard has committed to the transparency."

Dillard told ABC11 that her goal is to rebuild trust and change people's perceptions.

"I recognize people's ability to feel how they feel," Dr. Dillard said. "And what we want to do is heal that and move forward."

What's next in the process?

The university is expected to ask Raleigh City Council to rezone much of its 28 acres of land to remove development hurdles and allow for greater flexibility for what can be built there.