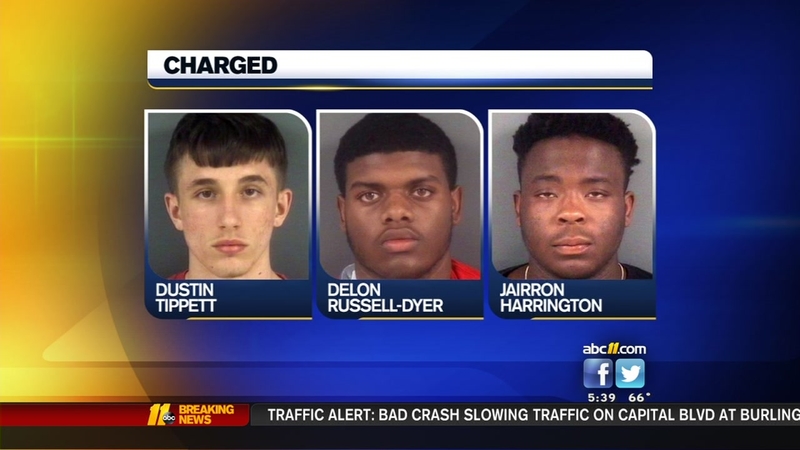 FAYETTEVILLE (WTVD) -- Two people were shot Monday afternoon at a Fayetteville McDonald's after the sale of a couple of cell phones turned into an attempted robbery, police said.

Russell-Dyer and Jairron Harrington were shot during the robbery and were treated and released from Cape Fear Valley Medical Center, police say.

On Tuesday, the three suspects went before a judge and all three had their bonds raised from $50,000 to $250,000. The District Attorney said the bond increase was appropriate because the teens are suspects in a robbery from a few days ago.

Forensic techs are wrapping up investigation into shooting at this Fayetteville McDonald's https://t.co/sYZKW275la pic.twitter.com/v8Q7lCI4cg

Four people apparently met at the restaurant to finalize a Craigslist deal for the cell phone, Medlock said. Three teens planned to sell two cell phones to the fourth person, who was already waiting inside the restaurant.

During the transaction, police said, the three robbed Joyner with a handgun. Joyner then fired back with a handgun of his own inside inside the busy restaurant at the other three, striking two of teens.

The gunshot victims were taken to Cape Fear Valley Medical Center for treatment.

Their injuries were not considered life-threatening.

The restaurant was filled with customers, including families with children, police said. No bystanders were injured in the shootout, though an elderly woman was knocked to the ground as the three suspects ran out of the restaurant. Police caught up with them shortly afterward.

The restaurant is closed while the investigation continues, but the drive-through remains open.