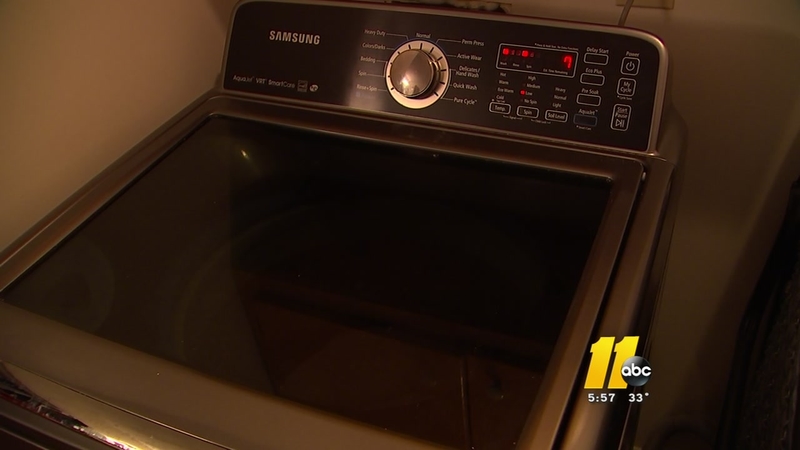 OFXFORD (WTVD) -- Despite a national recall, I continue to get complaints about some Samsung top loading washing machines.

In 2015, ABC11 was the first to expose the problem with some Samsung top loaders that viewers claimed exploded during mid-wash.

A year after our investigation, Samsung recalled 2.8 million of the machines.

Samsung did provide a fix for the recall, but we are still hearing from viewers who continue to have problems.

Sandra Thomas from Oxford said she was left frustrated after she spent big bucks on her Samsung top loader.

Her machine was fixed under the recall, but her problems continued.

"It's making a clonking noise; you'd think a sledgehammer was being hit on metal it's so loud," Sandra explained about her washer.

Sandra's Samsung washer was making so much noise, she began to grow concerned.

"When it was doing that, we wouldn't come in here for fear it may explode or something like that because of the loud sound and this glass top," said Sandra.

Fearful that her washer may cause harm to her family, Sandra got in touch with Samsung.

"They were like, 'We have nobody in your area to repair it, so we'll buy both your units back from you,'" Sandra said a rep from Samsung told her.

Sandra said she sent in all the paperwork to Samsung and waited for them to buy back her two units, which totaled $2,000.

"Every time I sent them what they asked for, they always called me and said they need something else," Sandra claimed.

Finally, Sandra heard a reply about her units.

"They were saying they were only gonna buy the washer back, not the dryer. There's nothing wrong with the dryer, but the two go together."

Becoming frustrated, Samsung got in touch with me.

I got in touch with Samsung and it didn't take long then for Sandra to get the good news.

A check for more than $2,000, which is a full refund of what she paid for both the washer and dryer.

Sandra has already taken that money and bought a new washer and dryer that she said is working great.

Samsung worked directly with the customer to resolve this matter to her satisfaction.

A Samsung spokesperson issued this statement:

"We work as quickly as possible to support all of our customers who have been affected by this recall. In Ms. Thomas' case, the process took longer than anticipated and was very unusual among the hundreds of thousands of customers who have participated in the recall program so far. We have apologized to her for the inconvenience and worked with her to ensure this was resolved to her satisfaction. We are listening to and learning from every consumer's experience in order to constantly improve our processes. Anyone with questions should contact us directly at 1-866-264-5636."
Report a correction or typo
Related topics:
oxfordproduct recallssamsungrecall
Copyright © 2022 WTVD-TV. All Rights Reserved.
TOP STORIES
Officials remain optimistic as tourism in Wake County booms
Driver struggles to get permanent tags for truck bought on Vroom
Violent crime in Durham up 8% during first few months of 2022
American Airlines flight veers off runway in Charlotte
Decrease in home sales predicted nationwide but NC housing market hot
NY high court to determine if Bronx Zoo elephant is a person
Juvenile taken into custody in Wake Forest shooting
Show More
911 dispatcher who took Buffalo shooting call put on leave
Wake County Sheriff Baker says he'll seek runoff
Trump to hold July rally in Greensboro
Cary psychologist details Buffalo, NY shooting impact on minorities
Supply chain issues may affect A/C repairs this summer
More TOP STORIES News