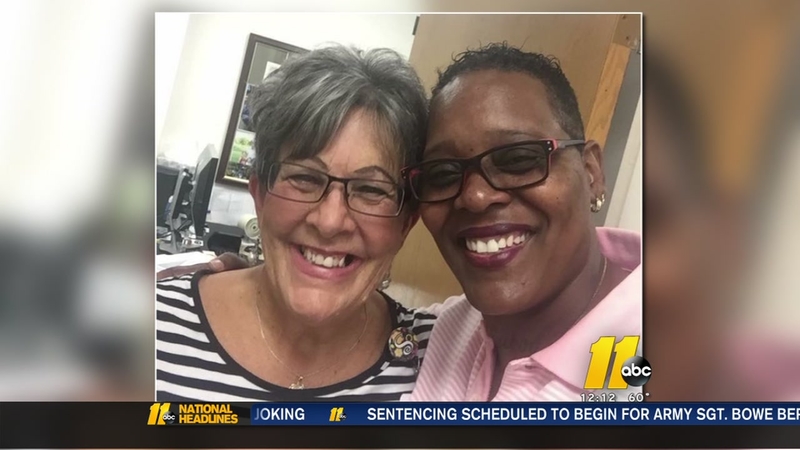 Hit-and-run survivor connects with good Samaritan who helped her

But the physical and emotional damage caused by a hit-and-run driver in Durham over the summer haunts her to this day.

ABC11 first reported the careless driver's action shortly after it happened on the morning of June 21 in front of Parker's Club Boulevard home.

At that time, Parker was already in the hospital for treatment of her injuries.

On Wednesday, she said that the hit-and-run driver knocked her out of her shoes, with one landing several hundred feet away near her neighbor's front porch.

She said she was talking with a garbage collector who had stopped near her driveway, adding that a bus was also stopped on the street. As he started to walk back to her home, what happened next changed her life.

"Somebody came around the bus in a rush and hit me!"

Parker said she remembered few details after she was hit, but told ABC11 the impact knocked her into the mailbox, which ABC11 crews saw flattened the day the incident was reported

And crews didn't know much more about what happened to her until she reached out to ABC11's Anthony Wilson on Facebook Tuesday, asking if he could also report on the woman she credits with saving her life - a licensed nursing assistant and staff specialist in the Department of Psychiatry who saw what happened and got out of her car to help.

"She said, 'You went up in the air like a rag doll, and came back down.' It was like 15 cars going both ways, and she's the only one who got out to help me!"

Parker's good Samaritan is Sharon Rhoden, who spoke with ABC11 by phone on Wednesday.

They met online at first after Parker turned to Facebook with a plea for information about the woman who stopped to help her. It didn't take long to find a reference to the hit-and-run on Rhoden's page.

"She was telling me about the accident on June 21 and I said, 'Is there any way I can meet you? I'm the lady that got hit.' And she replied back to me."

Through their Facebook connection, the two women also learned that they both worked at Duke University Hospital in different buildings, and their paths never crossed during their decades of employment there until the day of the hit-and-run.

They finally met face-to-face on Tuesday and posted pictures of their happy reunion on their Facebook pages.

"I was just telling her that I love her and she's my hero, and I want to always keep in contact with her because you don't find nice people anymore," said Parker.

Four months later, Parker said she has some memory loss and limited range of motion in one hand after the incident.

She smiled as she showed Wilson a picture of a gift she gave Rhoden when they finally saw each other again.

"I bought her a pendant to go around her neck, saying I'll always be at your side.'"