"Even during the housing bust, and the crash, and the great recession, yes we did see increases in delinquency rates, absolutely. But on a month-to-month basis, nothing at all like we saw between March and June," said Frank Nothaft, Chief Economic for data property firm CoreLogic.

"What's also been unprecedented is how severe the overall economy has been hit," Nothaft explained, adding the problem could be exacerbated if the economic recovery doesn't happen more quickly.

"It's highly concerning, obviously. The loss of wealth after the foreclosure crisis, particularly among communities of color and African-American communities is stunning," added Samuel Gunter, the Executive Director of the North Carolina Housing Coalition.

One such tactic: forbearance plans.

"If you're feeling a great deal of financial stress, reach out to your lender and you can confirm whether you're eligible for the forbearance, and that may be an option you want to take for a period of time," said Nothaft.

The Mortgage Bankers Association estimates 3.5 million homeowners in the US are in forbearance plans, something that gives those in need a little more time.

"When you have a 30-year mortgage, you can put those payments off to the end of it," said Gunter.

While the forbearance may provide temporary relief, it is not the same as forgiveness.

"We're concerned now, because the forbearance is temporary. And a lot of the forbearances and the hold on foreclosures and evictions run through the end of the December, so in 2021 we anticipate that a lot of homeowners will be facing foreclosure and will need assistance, will need help with payments," said Mary Holder, the Manager of the Foreclosure Prevention Program at the North Carolina Housing Finance Agency.

She suggests homeowners be proactive.

"Even if you're in a forbearance, still connect with a housing counselor because when the forbearance is over the counselor can assist you in completing paperwork that will be needed for the ultimate resolution, which would be a loan modification," said Holder.

Still, between forbearance and historically low-interest rates, Gunter says there are more options available to homeowners than renters.

"When you've got a year lease, even if you're coming back the ability to make up what you weren't paying whether it's two months, three months, even a month, what that does to a family that's at lower incomes is catastrophic," said Gunter.

CoreLogic reports the national mortgage delinquency rate is at 7.1 percent, meaning Raleigh is performing better than the average. 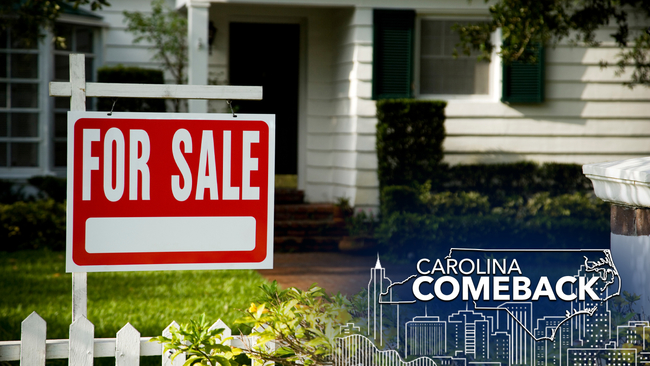