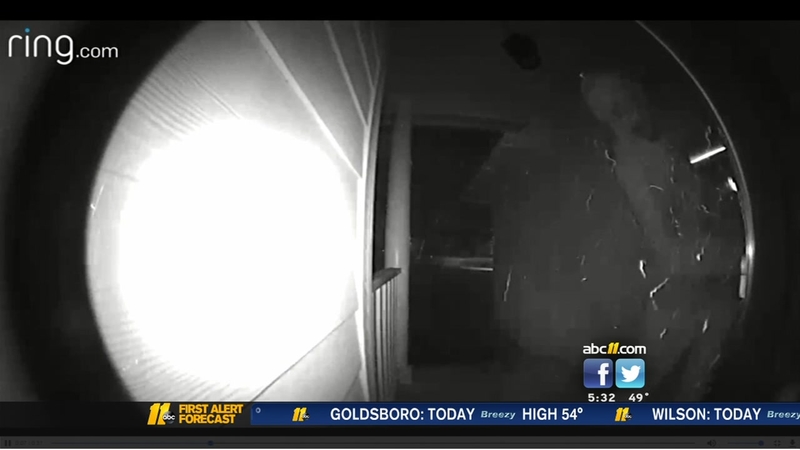 CUMBERLAND COUNTY (WTVD) -- The Cumberland County Sheriff's Office is looking for a man who tried to break into a deployed soldier's home. It happened December 7 in a north Fayetteville neighborhood around 2:30 in the morning.

The suspect was caught on the homeowner's surveillance camera trying to break through the front door.

Deputies aren't certain if the crook got away with any valuables; however, during their investigation, they noticed a small jewelry box had been rummaged through.

The victim is a Fort Bragg soldier who's currently deployed to Afghanistan.

"It's especially disheartening when something like this happens because this person is doing the job they get paid for, and it's unfortunate they are away from their residence this time of year and someone wants to target them and steal their things," said Lt. Sean Swain.

The victim's Ring app notified her of the attempted break-in. Several of her neighbors also have the surveillance technology.

"Bad guys know that you have presents under the tree and it just makes you a target," said Swain.

The Ring app allows you to answer your door from anywhere and sends a notification whenever there is motion near your home.

Additionally, the technology will alert your neighbors of suspicious activity or when your alarm goes off.

Deputies are now asking for the public's help in identifying the suspect seen on home surveillance video.

If you know anything, contact the Cumberland County Sheriff's Office at (910) 323-1500
Report a correction or typo
Related topics:
fayettevilleburglarysoldiersfayetteville newsfayettevillesurveillance video
Copyright © 2021 WTVD-TV. All Rights Reserved.
TOP STORIES
Homeowners burn down house in attempt to get rid of snakes
Pedestrian killed on US 401 identified as Rolesville HS student
Parents charged in school shooting arrested, plead not guilty
Tensions between US, Russia escalate ahead of Biden-Putin call
Money found inside megachurch walls possibly tied to 2014 theft
COVID-19 metrics climb after Thanksgiving but still far below 2020
Show More
Contact tracing revs up as omicron cases detected in several US states
Disney On Ice returns to Raleigh, Fayetteville soon
How unusual to charge parents in school shooting? EXPLAINED
Study suggests past COVID infection may not fend off omicron
Gov. Cooper receives trees, wreaths ahead of tree lighting
More TOP STORIES News