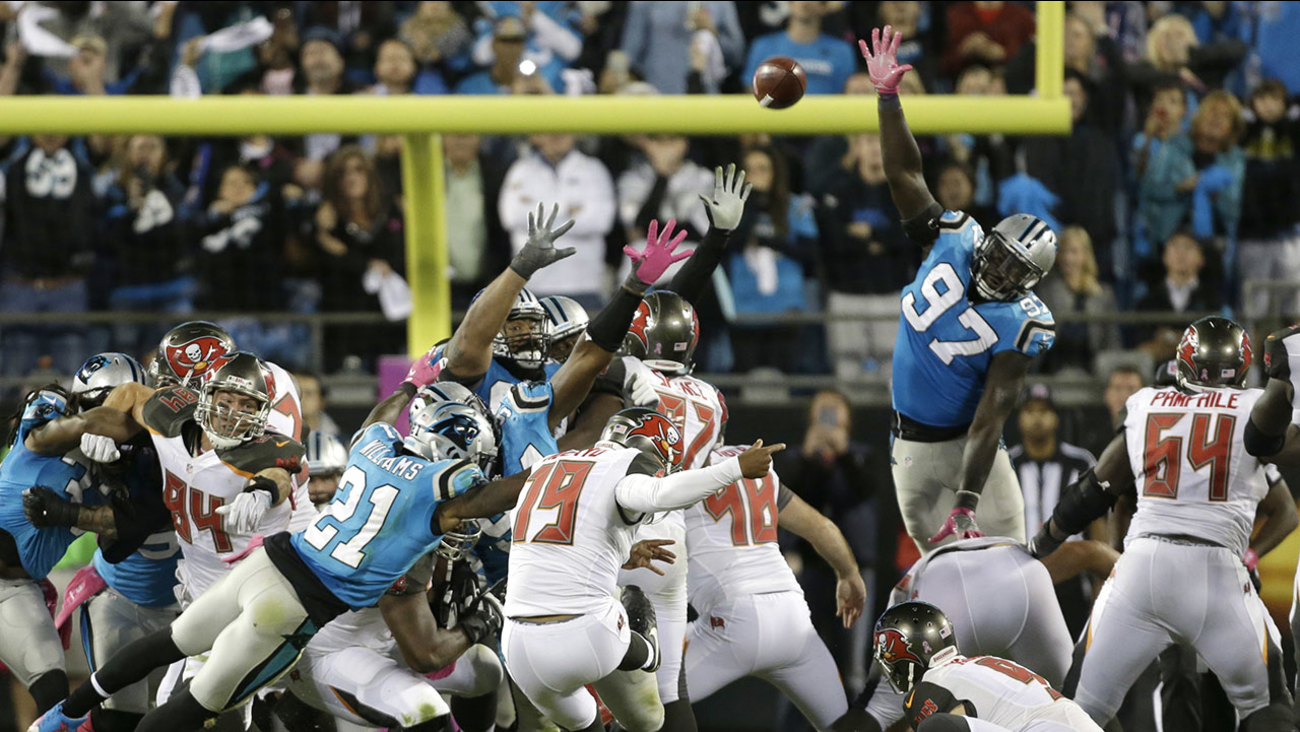 The rookie made up for missing two earlier field goals by converting a 38-yard field goal as time expired to lift the Tampa Bay Buccaneers over the Carolina Panthers 17-14 on Monday night.

Aguayo, the most accurate kicker in NCAA history, had clanked a 33-yard field goal attempt off the right upright and missed wide left from 46 yards that would have given the Bucs the lead with 3:38 left in the game. He was just 3 of 7 on the season before the winning kick.

"Obviously you get a little angry when you miss them," Agauyo said. "You can't dwell on it or you won be ready for the next one."

When asked how comfortable he was with the field position on the final kick, Bucs coach Dirk Koetter replied, "I wasn't comfortable. We couldn't get close enough."

Jameis Winston was 18 of 30 for 219 yards and threw a TD pass to Mike Evans . He also led a 66-yard drive to get the Buccaneers (2-3) into field goal range. A costly 15-yard facemask penalty on Kony Ealy hurt the Panthers along the way.

Jacquizz Rodgers ran for 101 yards on 30 carries in place of the injured Doug Martin.

The Panthers turned the ball over four times, three of those by Derek Anderson, who was filling in for the concussed Cam Newton.

"We moved the ball when we wanted to and had a lot of good things happen, but we had bad plays at the wrong times," Anderson said.

The most costly turnover came late in the fourth quarter with the game tied at 14 and the Panthers having a first-and-goal at the Tampa Bay 2. Anderson inexplicably threw into double coverage in the right corner of the end zone and was intercepted by Brent Grimes.

"If I had it back I would have thrown it away," Anderson said. "That was a difference maker."

The Panthers ruined a memorable night from Greg Olsen, who had a career-high 181 yards receiving on nine catches. Cameron Artis-Payne ran for two touchdowns for the Panthers.

Carolina is now 1-4 after reaching the Super Bowl last season.

The Panthers, who have won three straight NFC South titles, are now three full games behind the Atlanta Falcons.

"We've got a laundry list of things that didn't go our way," Olsen said. "The reality is, in this league, you make your own luck. You make your own fate. You can't sit around and hope the ball bounced your way. Right now, it's not, but that's just the nature of this league. It goes in flows. There's times where it seems like everything you do is right, the ball bounces your way, but that's not the case right now for us. We've got to make our own luck, because nobody's feeling sorry for us. That's just the reality right now."

TURNOVER PRONE: The Panthers turned the ball over just 19 times last season en route to the Super Bowl. This year they already have 14 turnovers in the first five games.

RIVERBOAT RON: With his team trailing 6-0, Panthers coach Ron Rivera lived up to his "Riverboat Ron" moniker when he went for it on fourth-and-goal from the Bucs 1-yard line. Artis-Payne dove into the end zone to give Carolina its first lead of the game.

BUCS UP FRONT: The Bucs were without starters - Gerald McCoy (calf) and Clinton McDonald (hamstring) and defensive end Robert Ayers (ankle) - out with injuries.

NO LEAGUE MVP: Newton was not on the sideline after sustaining a concussion last week against the Falcons. The Panthers visit the Saints next week before getting a bye. It's unclear if the reigning league MVP will be ready to go.

BY THE NUMBERS: The Bucs ran 20 plays to Carolina's three in the first quarter. Anderson didn't attempt a pass in the opening quarter as the Bucs controlled the ball for more than 13 minutes.