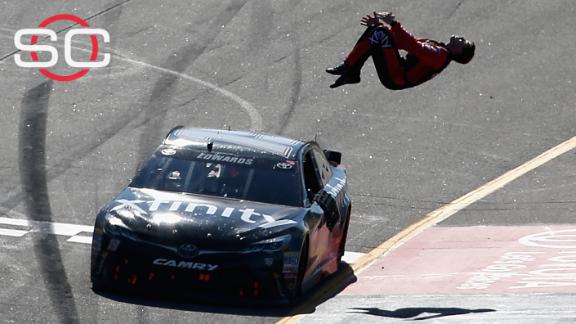 RICHMOND, Va. -- Carl Edwards had been grinding for 30 laps, doing everything he could to catch Joe Gibbs Racing teammate Kyle Busch in a two-way breakaway from the pack at Richmond International Raceway.

When he finally caught him on the last lap Sunday, and in the final turn, Edwards had no time to think about what would be the prudent thing to do. Instead, he focused on the reason they are racing: to win.

Edwards bumped his sometimes-volatile teammate off his racing line in the last turn and passed him to win his second consecutive NASCAR Sprint Cup Series race and the fourth in a row for the Gibbs racing stable.

NASCAR said it was the first last-lap pass for a victory in the history of the premier series at the track, a span of 120 races.

"I wish it was anybody but my teammate that we had to race like that with, but big picture to me is we've both got some wins, we're in the Chase, and it's fun to have to race your teammate for the win," Edwards said. "If the roles were reversed, I would have expected him to bump me the same way."

Gibbs said there is no plan for how to handle the next team meeting.

"What you do is you just start out and work your way through it, and that's what we'll do," he said.

Edwards, who had fallen almost 1.5 seconds behind after a restart with 36 laps to go, gradually ran Busch down, catching him on the final lap. Then he slipped underneath Busch, a master blocker in late-race situations, and nudged him just enough to allow Edwards to get inside him for the win.

"Kyle's an amazing teammate, and it's like he got really slow there at the end," Edwards said. "Something happened that last lap. It's like his rear tires went off or something, and he went down into [Turn] 1 and I dove it in and I got to him, and I thought, 'Man, I've got something here.' Then he went to get down to the bottom to park it in 3 and 4 and I'd already decided to go down there, so I thought, 'Man, I'm going to give him a little nudge.'

"We've both got wins. We're racing for fun and getting these trophies. Just an awesome day."

After falling so far behind, Edwards was surprised to find himself in position to challenge for the victory.

"I didn't think we had anything. Kyle was just so good for that run. I was just doing everything I could. He never spun his tires," Edwards said. "If [crew chief] Dave [Rogers] hadn't screamed at me to just go get him, I don't know if I would have dove it in there that hard."

Busch seemed less than amused after being denied his third victory in the past four races.

"We just kind of gave it up a little bit there on the last lap, but I guess that's racing and we move on," he said. "... We were fast, maybe not as good as Carl was on the long runs, but we did everything right, everything we were supposed to do."

The race was the first scheduled for during the day at Richmond since 1997, and the racing made a huge fan of Johnson.

"We had multiple lanes that laid the rubber in the racetrack and we didn't have all those marbles built up on the outside, where it really limited your opportunities up high," he said. "It was fun. The cars were slipping and sliding; there was a ton of fall-off. I enjoyed the long runs. I really like sizing up guys that I'm racing with and seeing how that works out. And then, at the end, we had a bunch of short runs."

Kahne was trying to hang on to a good finish at the end and missed the drama ahead of him.

"I didn't watch. I wish I would have. It sounded like a great battle," he said.

Edwards dominated the first half of the race, leading 120 of the first 200 laps, and he continued to lead until Harvick slipped underneath him with 170 laps to go. Edwards faded for a time but wound up leading seven times for a race-high 151 laps. The race featured 23 lead changes, the most at Richmond since 2007.

Johnson has three career victories at Richmond but none since September 2008. ... Gibbs cars have won five of the first nine races this season. ... The race went green for the first 157 laps, the longest green-flag run to start a race at Richmond since 1979 and only the fourth time in the past 47 races in the premier series on the 0.75-mile oval that the first 100 laps were run caution-free.