Carmelo Anthony: 'Don't have to speak' on George Karl's remarks 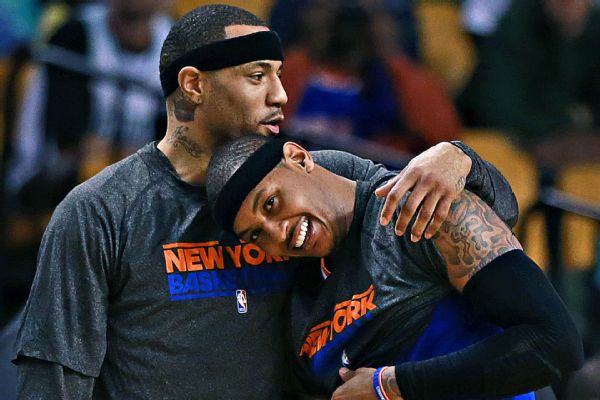 NEW YORK -- Carmelo Anthony took the high road in response to former NBA coach George Karl's criticism of him during their time together with the Denver Nuggets.

"I just hope that he finds happiness in what he's doing. His book, hopefully, will bring him happiness," Anthony said Thursday night, adding that he isn't disappointed by Karl's remarks.

"I'm past being disappointed," he said.

Mostly, Anthony said he was pleased that former Nuggets teammates J.R. Smith and Kenyon Martin defended him in the wake of Karl's assertions in his book, "Furious George," that Anthony is selfish and a "user" and that he played with a lack of commitment on defense.

"It's irrelevant to me. It's irrelevant at this point," Anthony said. "The truth of the matter is everybody else is kind of speaking up for me from their own experience. So I really don't have to speak on it."

Karl coached Anthony in Denver from January 2005 to February 2011, when Anthony's demand for a trade was fulfilled and he joined the New York Knicks. Karl said in the book that the trade was "a sweet release for the coach and the team, like popping a blister," according to an advance copy obtained by the New York Post.

"Carmelo was a true conundrum for me in the six years I had him," Karl wrote in the book. "He was the best offensive player I ever coached. He was also a user of people, addicted to the spotlight and very unhappy when he had to share it.

"He really lit my fuse with his low demand of himself on defense. He had no commitment to the hard, dirty work of stopping the other guy."

Anthony said he never heard such criticism from Karl or other members of the coaching staff when he was in Denver.

"When you're there, it's a different story than what you hear after the fact. I never knew it was this much," Anthony said. "I never knew I was a -- what was the word -- conundrum? I don't even know what the hell that means, to be honest with you.

"I never knew that. That never was brought up, anybody that you ask -- assistant coaches, players, front-office people -- anybody you ask will sing a different tune when it comes to me, when it comes to our mentality, that team."

Anthony joked that he might have more to say on the matter when he writes his own book someday.

Asked what the title of the book would be, Anthony said, "Stay Melo. Not Furious."

Several other members of Karl's Denver teams fired back at the ex-coach via Twitter earlier Thursday.

Martin and Smith were among the players whom Karl called out in his book. Karl compared those two, along with Anthony, to "the spoiled brats you see in junior golf and junior tennis."

Of Anthony and Martin, Karl wrote that they were negatively affected by not having fathers in their lives.

"Kenyon and Carmelo carried two big burdens: all that money and no father to show them how to act like a man," Karl wrote.

Karl also wrote that Smith, now with the Cleveland Cavaliers, had "a huge sense of entitlement" and referred to his group of friends as a "posse," a phrase over which Knicks president Phil Jackson took heat last month when he used it to describe Cleveland star LeBron James' business partners.

Anthony said late Thursday that he appreciated Smith and Martin standing up for him in the wake of Karl's comments.

"It's different when you're kind of going to bat for yourself," Anthony said. "It's you against somebody else's word. Then everybody's opinion comes into play, and they got to take sides. It's a big difference when you have guys who was actually in it there, had their own experiences and can speak on it on their own standpoint. It's a big difference, so for me I don't really have to speak on my experiences there. As long as I know what was going on and what happened, the truth, then I don't have to speak on that."

Fired by the Nuggets after the 2012-13 season, Karl served as an ESPN analyst before returning to the sideline with the Sacramento Kings in February 2015. An acrimonious season-and-a-half in Sacramento ended with Karl's firing after the 2015-16 campaign.

Karl, who has also coached the Cavaliers, Golden State Warriors, Seattle SuperSonics and Milwaukee Bucks, has a career record of 1,175-824.

In the wake of Karl's criticisms of Anthony, Knicks coach Jeff Hornacek was asked about his experience with the veteran forward.

"Carmelo, for us, has been great," Hornacek said before tipoff of a 106-95 win over the Orlando Magic on Thursday. "Whatever happened in the past that guys talk about, I know none of that. All I can go by is what I've seen out of Carmelo here. He's done everything we've asked and what the coaches want him to do. He's been a great leader for our team. So that's it, simply, for me."

Karl's comments marked the second time Anthony has been critiqued by a major NBA figure, though the first criticism was much tamer. Earlier this month, Knicks president Jackson said Anthony can fill the same role in the triangle offense that Michael Jordan and Kobe Bryant did with the Bulls and Lakers, respectively, but that Anthony had a propensity to hold on to the ball for too long. Anthony and Jackson met in Los Angeles to clear the air days after Jackson made the comments.

Hornacek commended Anthony on Thursday for the way he has handled criticism in general lately.

"I'm sure he hears it, but he knows that's in the past, whatever it is," Hornacek said. "His focus has really been on this team, with the new players that we have, trying to be a leader for our team. I think he ignores a lot of stuff, which is hard to do, but very commendable that he's doing that." 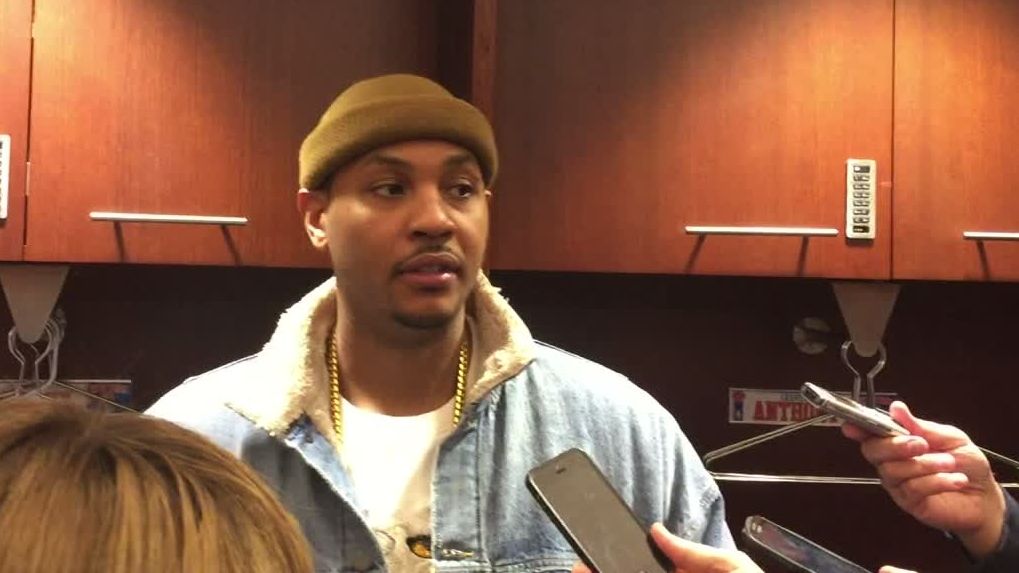 Anthony never realized he was a 'conundrum'
Carmelo Anthony responds to the critiques written in the book of his former coach with the Nuggets, George Karl. Anthony says he's not disappointed and hopes Karl finds happiness with the book.