ESPN
By Dave Wilson
Week 14 is one for the ages for college football.

Never before have we seen two undefeated teams, thousands of miles apart, up and schedule a game against each other in just a matter of days. But that's what happened with No. 13 BYU and No. 18 Coastal Carolina. Of course, the fact that these two teams are among the darlings of the 2020 season is its own storyline.


Hitting the streets is the theme of this week. The three contenders -- Ohio State, Texas A&M and Florida -- for the No. 4 spot in the College Football Playoff are all on the road this week, but only the Aggies (at Auburn) are less than a touchdown favorite.

We'll have all the highlights, uniforms and analysis of the top games here all day. So let's buckle up and get to truckin'. We've got a long way to go and a short time to get there.


East bound and down

After BYU and Coastal Carolina agreed on Thursday to play this weekend, the Cougars' equipment truck had to make a mad dash, 2,200 miles from Provo, Utah to Conway, South Carolina. They drivers had to leave Wednesday night in case the game was scheduled, so they started a live-tweet cross-country journey with a joke that they were making a run for the border.

And the end result:

What a difference a year makes

Last year, during one of the greatest seasons in college football history, LSU had a massive celebration after beating Alabama in Tuscaloosa. This year, going into the rematch, the Tigers are 3-4. These clips might have gotten some run in film rooms this week for Alabama.

The sickest of edits

In the social media wars, Texas A&M's 12th man has been spotted flying high above a canyon to take down an eagle before the Aggies' big game against Auburn. It has been a theme all season long for the graphics team in College Station.

Back to the couch for Bob

Former Oklahoma coach Bob Stoops was back on the sideline this week in practice due to a coaching shortage from COVID-19 testing, but will be kicking back on Saturdays again after the Sooners had enough coaches back.

Notre Dame is having one of its best seasons under Brian Kelly. This momentum has apparently filtered all the way to the Leprechaun.

Mack Brown's daughter, Katherine, went on Jeopardy and, much like her father's trip to California in '06, she earned the crown.

Sports, but make it fashion

Rutgers is wearing its "Black Knight" uniforms, complete with some carbon fiber chrome on the numbers.

Clemson, meanwhile, arrived in style for its game at Virginia Tech. 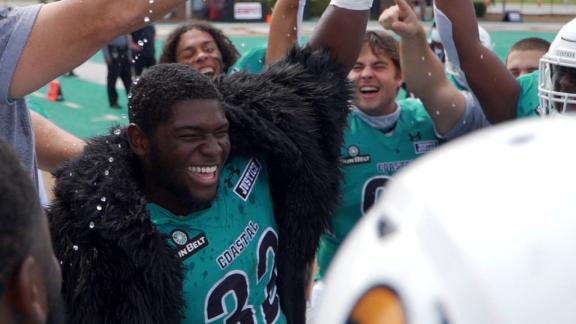 How Coastal Carolina is having fun proving doubters wrong
See how the Coastal Carolina Chanticleers have gone from relative unknowns to viral sensations for their play on and off the field. 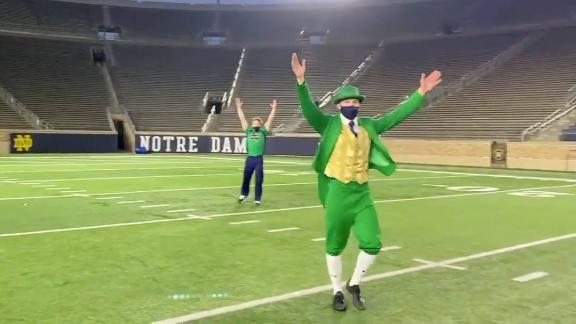