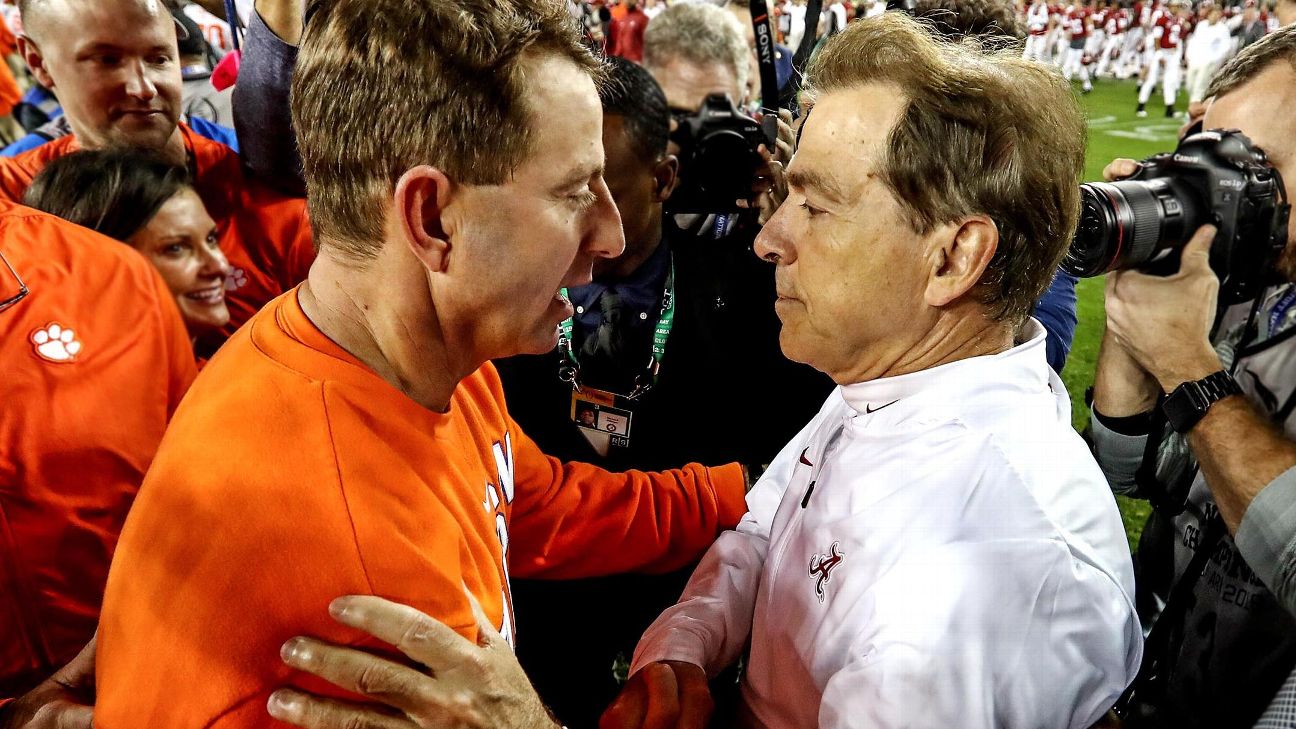 Part of the magic of the NCAA tournament is the little guy knocking off the big guy, especially in the early rounds and against all odds.

But when you get to this point, talent usually wins out. We're down to 16 teams in ESPN's fictional NCAA football tournament. Here's how we got down to 16.


There were some thrilling finishes and memorable performances in the first two rounds. All four No. 1 seeds are still alive: Alabama, Clemson, Ohio State and Oklahoma. Three of the No. 2 seeds are still playing: Georgia, Iowa State and Miami.

To recap, the original seeds were based largely on ESPN's latest SP+ projections entering the 2021 season. Some entertaining matchups await, so let's finish football's version of a 64-team tournament.

(1) Alabama 34: (4) Iowa 20: Between them, Nick Saban and Kirk Ferentz have 53 years of head-coaching experience in the college ranks. But Saban has the better players, and two of those players --Bryce Young and John Metchie III-- hook up for three touchdown passes to send the Tide to the Elite Eight.

(3) Texas A&M 30, (10) Liberty 21: The Flames' dramatic ride through the tournament comes to an end, but not before Malik Willis and his Liberty teammates endear themselves to college football fans everywhere. They simply are unable to match up with the Aggies' front seven on defense.

(1) Alabama 27, (3) Texas A&M 23: One of these days, one of Saban's former assistants is going to beat him, but this isn't that day. Jimbo Fisher has the Texas A&M program on the cusp of championships, but the Aggies fall short of a Final Four trip when they fail to convert some early turnovers into touchdowns.

(1) Clemson 35, (5) Utah 17: Rarely on big stages has Brent Venables' defense not answered the bell, and the Tigers come through on that side of the ball once again by holding the Utes to 3-of-12 on third-down conversions and not allowing a touchdown in the second half.

(6) Texas 28, (2) Miami 21: After a dynamic close to his freshman season, Texas running back Bijan Robinson is even better as a sophomore. He runs wild against a talented Miami defense with 210 rushing yards and three touchdowns to lead Steve Sarkisian and the Longhorns to the upset.

(1) Clemson 27, (6) Texas 20: What a matchup between Venables' defense and Sarkisian's offense. The Tigers are able to slow down Robinson and the Texas running game, but the Longhorns are able to hang around until Clemson veteran linebacker James Skalski forces a fumble in the shadow of the Tigers' goal line to change the complexion of the game.

(1) Ohio State 37, (5) Louisiana 24: Billy Napier's Ragin' Cajuns don't back down in this Sweet 16 matchup and go into halftime with the game deadlocked, but Chris Olave and Garrett Wilson each catch touchdown passes in the third quarter to help the Buckeyes pull away in a game that's much closer than the final score indicates.

(2) Iowa State 41, (6) Ole Miss 38: Like a tennis match, the Cyclones and Rebels go back and forth in one of those offensive slugfests that has come to define college football. Ultimately, Brock Purdy outduels Matt Corral in a game that features more than 800 passing yards and Matt Campbell's Cyclones extending their dream season.

(2) Iowa State 30, (1) Ohio State 27: In its Sweet 16 win over Ole Miss, Iowa State leaned on the passing of Purdy. This time, it's Breece Hall who shows everybody why he's one of the top running backs in college football. He runs for two touchdowns and also scores on a tackle-breaking touchdown catch to punctuate the upset. Yep, the Cyclones are in the Final Four.

(1) Oklahoma 42, (4) North Carolina 28: Mack Brown had a front-row seat to the Bob Stoops-led OU machine when Brown was at Texas. In fact, Brown won five of his last nine games against the Sooners. But his UNC defense can't keep up with OU's sensational receiver, sophomore Marvin Mims, who takes a couple of short tosses and turns them into touchdowns of 60 and 55 yards.

(2) Georgia 31, (3) Florida 30: As you would expect in a matchup of these two old rivals, it's a classic in a rematch of the game formerly called the World's Largest Outdoor Cocktail Party. And, yes, Larry Munson from his heavenly broadcast booth goes through his "metal, steel chair" as JT Daniels rallies the Dawgs from a 14-point deficit.

(2) Georgia 37, (1) Oklahoma 34: When these two teams get together in the postseason, get ready for football entertainment at its finest. They played a double-overtime thriller in the 2017 College Football Playoff semifinal at the Rose Bowl. This one takes just one extra period, but the Dawgs get it done again on a Jack Podlesny 43-yard field goal.

(1) Alabama 35, (2) Iowa State 28: The Cyclones give the Crimson Tide all they want in the first national semifinal of the day. In fact, Hall is ripping off first downs in a potentially game-tying drive, but the Alabama defender who has made one big play after another all season makes his biggest yet. A sack by sophomore linebacker Will Anderson Jr. sends the Tide back to the title game.

(1) Clemson 28, (2) Georgia 23: There was a time when these two schools, separated by less than 80 miles, played every year and treated us to some memorable games. But those contests didn't carry stakes like this. Trevor Lawrence will never be forgotten at Clemson, but his successor, D.J. Uiagalelei, makes every key throw in the second half in Lawrence-esque fashion.

(1) Alabama 30, (1) Clemson 24: Would it even be a "real" national championship game without one of these two teams? This marks the seventh straight year that Alabama or Clemson has played for the national championship and the fourth time that they've met in the title game. The Tigers, brimming with future NFL talent on their defensive line, shut down the Crimson Tide's running game for much of the game. But Young has a clean pocket in the second half and opens up things with the passing game, giving Saban his seventh national title at Alabama. But the worst news for the rest of the college football world comes after the game when Saban announces that he's going to coach at least seven more years. 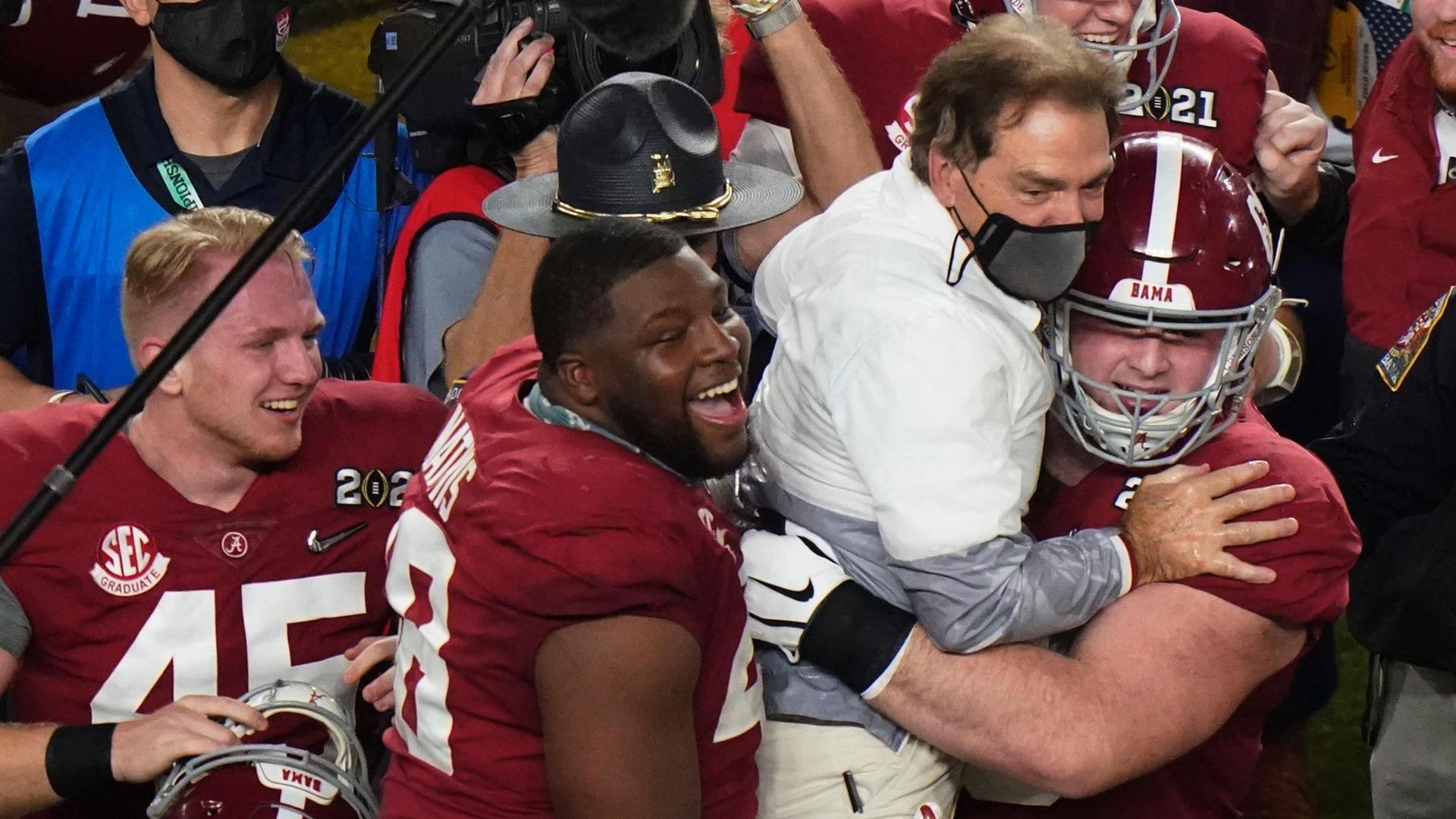