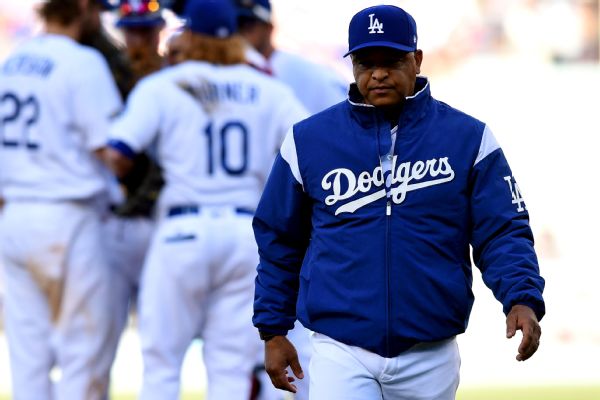 LOS ANGELES -- For the second consecutive series, a Dodgers opponent ran the balk flag up the pole, and Los Angeles managerDave Roberts is growing impatient with it.

Chicago Cubs manager Joe Maddon called the move to first base by Dodgers rookie pitcher Julio Urias "Balking 101." In the Dodgers' opening round series against the Nationals, Washington manager Dusty Baker said thatClayton Kershaw's move to first base is a balk.

"You know what, for us, and I have said it all along, is for us to all eliminate noise," Roberts said before Game 4 of the National League Championship Series on Wednesday. "I think that it's telling when an opposing manager has to pull out certain stops to play the mental game. So for us, that doesn't affect us."

Here was Baker's take on Kershaw's move to first base during the NL Division Series: "I know he's tough to hit and he's tough to run on. Quite frankly, I'm hoping we get some baserunners and the umpires might call a balk or two on him because he kind of rolls through the set position -- which they don't call -- but I heard that really upsets him if they do call one. So I'm hoping they call maybe a couple of them."

The umpires did not call a balk on Kershaw during the NLDS.

Maddon's complaint with Urias was in regard to the angle he takes when stepping toward first base.

This was Maddon's take on Urias' pickoff move when meeting the media on Tuesday: "When you get to see it on TV, it's pretty obvious, it's not even close. It's a very basic tenet regarding what is and what is not a balk. Give him credit, man, for going through with it. That's part of the game. I think from umpire's perspective, there are certain umpires that are in tune to that, some that are not. There are other balks that I always get annoyed with that aren't called. So I'm certain that the umpiring crew has been made aware of it. That's not an interpretation. That's Balking 101 for me. So we'll see. We'll see how it all plays out."

Why worry so much about a move to first base from a 20-year-old pitcher? Well, Urias was actually tied for the major league lead with six pickoffs in just 77 innings pitched in the regular season.

And Baker should have probably been complaining about Urias' move in the NLDS, not Kershaw's. The only pitcher to pick off a runner in that series was Urias.
Related topics:
sportsespndave robertsbalkpostseasonmlbnational championship serieslos angeles dodgersjulio uriasjoe maddonnlcschicago cubsplayoffs
Copyright © 2022 ESPN Internet Ventures. All rights reserved.
TOP STORIES
Cooper 'more concerned' about this winter storm than the last one
Winter storm likely to hit east of I-95 hardest
Schools in Wake, Durham counties to close Friday
Contact tracers' role changes as pandemic reaches new heights
Flavor District, Triangle's largest 'ghost kitchen' to open in fall
Residents in Wilson prepare for black ice and snow
Reporter hit by car on live television, but continued reporting
Show More
Check your tires before -- and after -- the wintry weather
American Airlines flight diverted over maskless passenger
Only one monoclonal antibody treatment is effective, NIH says
Florida doubles down on anti-critical race theory legislation
LATEST: Governor says focus on vaccines, testing -- not mandates
More TOP STORIES News