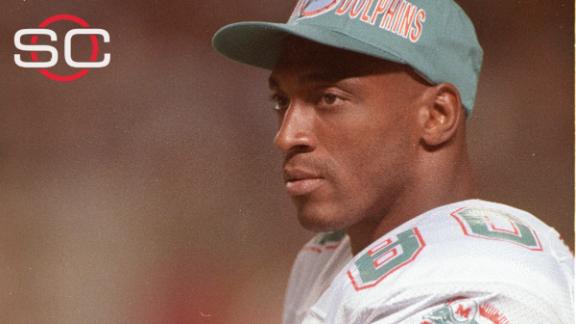 MOUNT HOLLY, N.J. -- Former NFL star Irving Fryar, a five-time Pro Bowler in a career than spanned 17 seasons from 1984 to 2000, was sentenced Friday to five years in prison for his role in a mortgage scam.

His mother, Allene McGhee, was sentenced to three years' probation in the same case.

Both were convicted in August of applying for multiple mortgage loans in quick succession while using the same property as collateral.

Fryar, 53, was a star receiver at the University of Nebraska and played for the New England Patriots, Miami Dolphins, Philadelphia Eagles and Washington Redskins.

Fryar's defense asserted he was the victim of a "con artist" who told him to carry out the scheme, a reference to William Barksdale. Barksdale pleaded guilty last year to a conspiracy charge and was the government's key witness at Fryar's trial. He is serving a 20-month prison sentence.

Fryar and McGhee, 74, rejected plea deals from state prosecutors that would have put him in prison for five years and her for three. They were found guilty of conspiracy and theft by deception charges.

Authorities said Fryar and his mother provided false wage information on her loan applications and claimed she earned thousands of dollars a month as an event coordinator for Fryar's church. Authorities said the pair made just a few payments on four of the loans and banks eventually wrote the loans off as losses.

"The fact that Fryar had the means to succeed and do good things and instead chose this criminal path makes his actions all the more reprehensible," acting New Jersey Attorney General John Hoffman said in a statement Friday.

Fryar starred for Rancocas Valley High School in Mount Holly before playing at Nebraska and becoming the first overall pick in the 1984 NFL draft by the Patriots. He now is the pastor of a church he founded, and for a time he served as a high school football coach in Robbinsville, New Jersey.