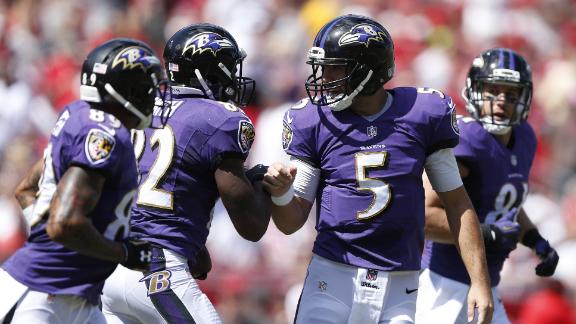 TAMPA, Fla. -- Joe Flacco became the fastest player since the NFL-AFL merger to throw five touchdowns in a game, and the Baltimore Ravens routed the Tampa Bay Buccaneers48-17 at Raymond James Stadium.

According to the Elias Sports Bureau, Flacco's fifth touchdown pass -- which was a 56-yarder to Steve Smith Sr. -- came just 16:03 into the game and shattered the old mark set by the Steelers' Ben Roethlisberger, who threw five touchdowns against the Ravens 28:09 into a game in 2007.

Flacco's five not only matched the most touchdown passes by a Ravens quarterback in the team's 19-year existence, but it also marked a personal high for Flacco.

"I don't know if I've ever thrown five touchdown passes in a game, to be honest with you," Flacco said. "It was really surreal and a lot of fun at that point. At that point, shoot, we're on pace for almost 16 touchdowns. Man, that would've been even better. It could've gotten me into the 20s already."

Flacco threw touchdowns on the first five drives of the game for 15, 9, 17, 19 and 56 yards. The most recent player to throw five touchdowns in one half was Peyton Manning, who did it in the second half of the 2013 season opener against the Ravens.

"I was just sitting there and watching it, going 'Wow,' " Smith said. "He was throwing some heat-seekers in there, and they were right on target."

Flacco's first two touchdowns went to Torrey Smith on slants. He then connected with Kamar Aiken and rookie Michael Campanaro for their first career touchdowns. By the time he hit Steve Smith deep, the Ravens were ahead 35-0 just 1:33 into the second quarter.

Flacco acknowledged that he thought about throwing more touchdowns in the second quarter, but he believes it was "the right thing" to run the ball more in the second half.

"How many points did they score -- 17 points? Anything we did after the first three touchdowns didn't really mean too much at the end of the day," said Flacco, who was 21-of-29 for 306 yards. "All it is is stats. And that stuff feels good and looks great and all that, but it really doesn't mean anything. It's all about winning a football game. That's what we came here to do, and that's what we did."

The Ravens improved to 4-2 and trail the AFC North-leading Cincinnati Bengals (3-1-1) by percentage points.