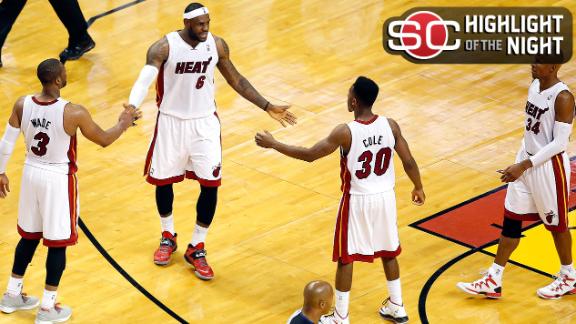 MIAMI -- The Heat could be short-handed when they attempt to close out the Eastern Conference finals in Game 5 on Wednesday against the Indiana Pacers.

Top reserves Chris Andersen and Ray Allen have both received extensive treatment for hip and thigh injuries, and their status for Game 5 remained in question as the team prepared to fly to Indiana late Tuesday afternoon.

Andersen, who bruised his thigh in a collision with teammate Dwyane Wade in the Heat's Game 3 win Saturday, sat out Monday's 102-90 victory as Miami took a 3-1 series lead over the Pacers. Allen bruised his hip and thigh as he attempted to run through a screen in the second half of Monday's win.

Both Andersen and Allen finished the games despite their injuries.

Andersen will travel to Indiana with the team and coach Erik Spoelstra indicated that Allen would travel and be evaluated before Wednesday night's game at Bankers Life Fieldhouse.

"He's the human bruise, so he has a lot of different things going on all over his body, and he's been able to play through all of that," Spoelstra said of Andersen. "He's a tough guy. We all know that. He plays through pain. But you have to understand the difference between pain and injury."

Andersen has averaged 6.7 points and 7.7 rebounds per game off the bench in the series and has been the Heat's most reliable defensive option in the post against the bigger Pacers front line. Allen is averaging 10 points and 3.5 rebounds while shooting a team-best 44.4 percent from 3-point range against Indiana.

Regardless of the Heat's available depth, Spoelstra said Miami is prepared to face a Pacers team desperate to avoid elimination. The Heat are a victory away from advancing to the NBA Finals for the fourth consecutive season as they pursue a third straight title.

"Naturally, you're going to get incredible urgency coming from their side," Spoelstra said. "Their backs are against the wall, and that's the only thing you have left is to play as if you have no tomorrow. And that's something you not only have to try to match, you have to try to exceed it."