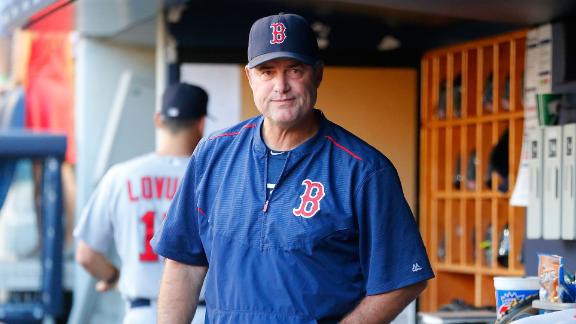 BOSTON -- Red Sox manager John Farrell said Friday that he has a "highly curable" form of cancer and will take a medical leave for the rest of the season to deal with lymphoma.

The 53-year-old Farrell said bench coach Torey Lovullo will run the Red Sox in his absence. Farrell said he plans to be back for spring training.

Fighting back tears, Farrell said the cancer was discovered when he had hernia surgery in Detroit earlier this week.

"I know we usually start out with the injury report. I'll start out with myself on this one. Monday's surgery for the hernia revealed that I have lymphoma," he said before Friday night's 15-1 blowout of theSeattle Marinersat Fenway Park. "Thankfully, it was detected in the hernia surgery. I can honestly tell you I'm extremely fortunate that it was found. Treatment will beginin the coming days."

Farrell said a mass was completely removed during the procedure and that no additional surgery was necessary. He said chemotherapy will start early next week.

"A little bit of a shocker to be told later that afternoon that this was going on. Like I said, I'm fortunate," Farrell said. "Stage 1. It's localized. It's highly curable. I'm extremely fortunate to not only be with people with the Red Sox, but access to MGH [Massachusetts General Hospital] and world-class talent that can handle this."

The Red Sox are in last place in the American League East with a 50-64 record.

Farrell, who previously managed the Toronto Blue Jays,guided Boston to the World Series championship in his first season in 2013. Los Angeles Angels OF Shane Victorino, a member of that 2013 team, tweeted support for his former manager:

A former major league pitcher, Farrellwas the pitching coach for the Red Sox in 2007 when they won the World Series. That season, ace Jon Lester returned from lymphoma in late July and started the clinching game of the Series in Colorado.

Farrell said he had no symptoms before the cancer was discovered.

He made the announcement with members of the Red Sox organization in the news conference room, including David Ortiz, Dustin Pedroia, general manager Ben Cherington and newly appointed president Sam Kennedy.

In February, Farrell's contract was extended through 2017, with a club option for 2018.

On Tuesday, Minnesota Timberwolves coach Flip Saunders said he is being treated for Hodgkin lymphoma, and his doctors consider it "very treatable and curable." His plans are to remain as coach and team president while being treated.

Lovullo, 50, who assumed managerial duties during Farrell's absence for the procedure, worked as a first base coach under Farrell during his time as manager of the Blue Jays and has also managed the Red Sox Triple-A affiliate in Pawtucket before becoming the bench coach under Farrell.

Red Sox general manager Ben Cherington said the team will evaluate in the coming weeks whether another coach will be added to the staff to assist Lovullo.

"[I] had an opportunity yesterday to talk to him as a human being and as a friend," Cherington said, "and let him know that we're with him, that he'll get through this and we're going to get through it together."

Cherington said he was informed of Farrell's diagnosis during a scouting trip to the Red Sox Gulf Coast League affiliate in Greenville.

"There's a lot of respect for him, not just within the Red Sox and this organization, but within baseball," Cherington said. "There are already a lot of people reaching out. He's someone who's spent his whole life in baseball. He's coached, he's worked in the front office and he's managed. He knows more people in baseball than just about anyone."

"We all love John," Werner said. "We said the most important thing is get back soon."

Ortiz said he heard about Farrell's condition from teammate Hanley Ramirez, who was crying when he delivered the news.

"When they mentioned the word 'cancer,' it's something that it doesn't matter where it comes from, it kind of impacts you," Ortiz said.

"We have a big family around here and definitely when it comes down to health issues, you want to be sure that everything goes OK. The organization is taking a lot of responsibility on that to make sure that John gets through it the way it's supposed to be," the slugger added.

Farrell was touched by his players' support.

"In a way, you live vicariously through their careers," he said. "Yours is over, you try to help when you can with them, and when they show that support, it's meaningful."