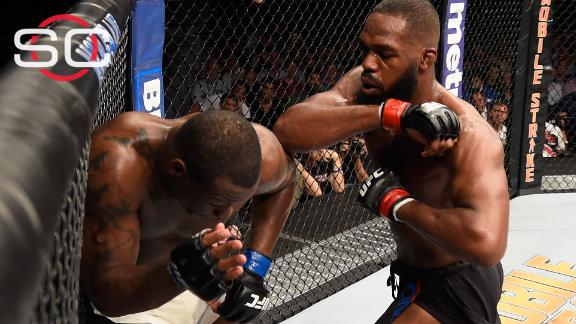 LAS VEGAS -- Jon Jones made his long-awaited return to the fight game on Saturday -- sort of.

Jones (22-1) easily defeated Ovince Saint Preux via unanimous decision to win the interim 205-pound title at UFC 197 inside MGM Grand Garden Arena, but he did not look like the lethal champion he has been in the past.

It was Jones' first appearance since he was stripped of the official title last year, after he was charged with a felony hit-and-run in Albuquerque, New Mexico, and subsequently sentenced to 18 months' probation. Jones, 28, looked tentative in his comeback but was nevertheless dominant. All three judges scored it a sweep for Jones: 50-44, 50-45 and 50-45.

Even Jones, who picked up his 13th consecutive win in the contest, said he was disappointed with how it went.

"I was watching, imagining, anticipating techniques -- knowing when techniques would have landed, but just not going for it," Jones said. "Physically, I felt amazing. Mentally, I was like, 'Oh my God, I'm sucking. This isn't good.'"

In his postfight statements, Jones added that "everything happens for a reason." Originally, Jones was supposed to fight for the official title in a rematch against Daniel Cormier, but Cormier suffered a leg injury and was forced to pull out of the event on April 1. Saint Preux (19-8) agreed to fill in on three weeks' notice.

"I was trying to be as confident as possible, but I really needed that fight," Jones said. "I didn't look at it as a warm-up fight, but as you can see, I needed that fight before I fight for my title."

Technically, Jones was crowned the interim champion, though he clearly has no interest in that label. As the UFC belt was presented to Jones after Saturday's fight, he declined to put it on, saying, "It's not the right belt."

Jones was never in danger of losing to Saint Preux; he simply struggled to really put him away. Jones walked Saint Preux backward throughout and essentially landed strikes at will. His push kick to the body and legs was efficient, and when he closed distance and moved inside, he landed hard elbows upstairs.

Saint Preux seemed even more tentative than Jones. He landed a small handful of right hands that got Jones' attention but nothing more. He seemed content to hang back and concede ground to Jones. He did display a good chin at times, standing up to a spinning kick to the head in the second round.

According to Fightmetric research, Jones outlanded Saint Preux in total strikes 131 to 58.

"I just wanted to come out here -- Jon is the pound-for-pound best fighter to ever come through mixed martial arts," Saint Preux said. "For me to come in here and do what I did, I'm pretty proud of myself. I only had three weeks to get ready. I gave it everything I had. I did a pretty good job."

After the fight remained a stand-up battle over the first three rounds, Jones took Saint Preux down in the fourth and fifth, which led to his best offense of the night. He moved in to mount in the fourth and dropped hard elbows and punches that had referee Herb Dean right on top of the action. Saint Preux was eventually saved by the bell.

Jones was transported around backstage in a wheelchair after the fight, but said he didn't believe he suffered any serious injuries. Jones said his "left shin [is] a little bruised up, for sure," but he added that he would return to practice next week.

According to UFC president Dana White, Saint Preux suffered a broken arm in the bout and was transported to a hospital.

The UFC is in need of a main event for its landmark event on July 9 in Las Vegas. A welterweight fight between Conor McGregor and Nate Diaz was supposed to headline that card, but the UFC pulled McGregor earlier this week after the Irish champion refused to fly to Las Vegas for promotional obligations.

Cormier told ESPN.com he is scheduled for an MRI on Monday. If he is cleared, he is hopeful that his rematch against Jones will take place at UFC 200.

According to White, that remains a strong possibility for the card as long as both are healthy.

"If they are both healthy, yeah, it's a possibility that could be the main event for UFC 200," White said.

After Jones was stripped of the belt, Cormier stepped in and won the vacant title by submitting Anthony Johnson at UFC 187 in May. Cormier recorded one defense in October, winning a split decision over Alexander Gustafsson.

Jones and Cormier met in a grudge match at UFC 182 in January 2015, which Jones won in a unanimous decision.