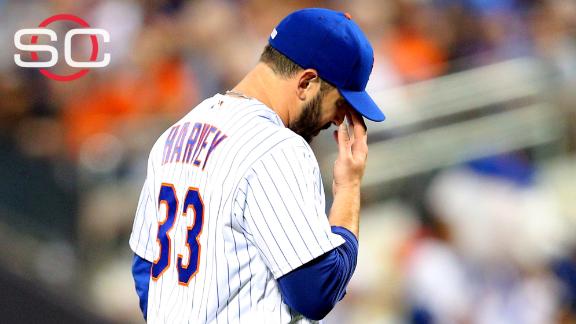 NEW YORK -- New York Mets right-hander Matt Harvey has been placed on the disabled list with right shoulder discomfort and has been dispatched to a St. Louis-based doctor who specializes in thoracic outlet syndrome and other blood-flow ailments.

The Mets announced that Harvey was seen by team doctors, who recommended an examination with Dr. Robert Thompson. Thompson is affiliated with the Washington University School of Medicine. He will evaluate Harvey on Thursday.

Thompson performed season-ending surgery on then-Mets right-hander Dillon Gee in July 2012 to repair a damaged shoulder artery that had resulted in a 96 percent blockage and a near-full loss of feeling in Gee's arm.

In his second season back from Tommy John surgery, Harvey is 4-10 with a 4.86 ERA in 17 starts. He allowed six runs (five earned) on 11 hits in 3 2/3 innings against the Miami Marlins on Monday.

After that start, Harvey said, "You go through your ups and downs. Unfortunately, this year has been more downs than there are ups."

It has been a rough year medically for Harvey, too. He dealt with what he described as a urinary tract infection during spring training, which led to a blood clot in his bladder and hampered his preparation for the season.

The Mets, once deep in starting pitching, are now a lot thinner at the position without Harvey.

Zack Wheeler, who originally aimed to return from Tommy John in early July, now is looking at a mid-August return at best because of setbacks. Steven Matz and Noah Syndergaard are pitching through bone spurs in their pitching elbows. Matz will need to have the spur surgically removed, although team officials are hoping to delay the procedure until after the season.