Mike Krzyzewski doesn't coach vs. Wake Forest due to virus 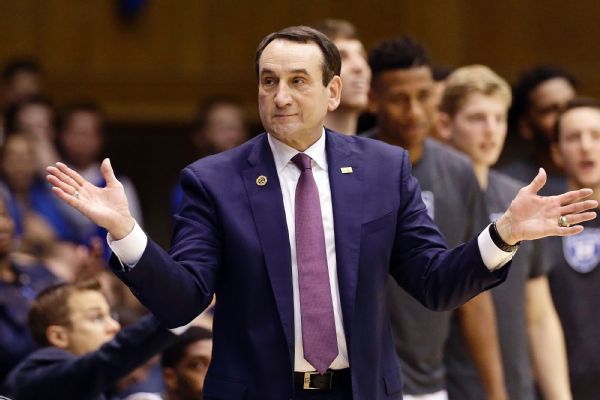 Krzyzewski was replaced for the game by associate head coach Jeff Capel, the school announced.

Capel said Krzyzewski woke up Saturday feeling ill and decided "he didn't want to get our guys sick, didn't want to put anyone else in jeopardy, but he's better."

The longtime coach missed seven games last season due to back surgery. The Blue Devils were 4-3 with Capel at the helm.

This is the third straight season in which the 70-year-old Krzyzewski has missed at least one game due to health reasons.

"We were prepared as a coaching staff, as a team, and obviously all of us would have wanted [Krzyzewski] out there and wish that he could have been there but respect his decision and looking out for us, not wanting to hurt the team," Capel said. "Everyone stepped up ... and it equated to a really good win for us."

No. 7 Duke (15-2, 3-2 ACC) won their second straight and moved their conference record over .500 for the first time this season. Duke has a quick turnaround with a game Monday night at No. 18 Miami, where the Blue Devils haven't won since 2014.