Nate Diaz: I want to fight Conor McGregor or not fight at all 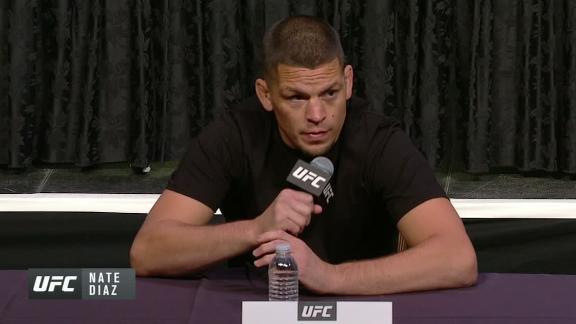 UFC president Dana White said Friday that Nate Diaz will remain on the UFC 200 card, but that his fight will not come against Conor McGregor.

Diaz threw a wrench into White's plans at Friday's news conference, however, saying that he would like to fight McGregor, or not fight at all.

"Everybody knows what's been going on with the main event for UFC 200," White said. "Nate Diaz will fight, and we're gonna find him a new opponent."

Diaz, speaking after White, said, "I came here to fight Conor. I'm not real interested in anyone else."

McGregor was conspicuously absent from Friday's news conference, which came a day after he released a statement on social media stating he was not retired, despite a post earlier in the week that said he was stepping away from the sport.

Tuesday, in response to McGregor's earlier post, UFC pulled him from a scheduled rematch against Diaz at UFC 200 on July 9, saying McGregor had refused to fly to Las Vegas to participate in promotional obligations.

Asked Friday if he knows where McGregor is, White said, "I think he's in Iceland."

"We try to give as much leeway as we can on things, but you have to show up and promote the fight," White said. "Is it too much to ask to try to shoot a commercial for the fight? A lot of these guys came here from different parts of the world. But, you know, these guys all came. They have better things to do, and they're here. It's part of the job.

"We gave Conor every opportunity in the world to get here, too. We get criticized a lot for bending too much for Conor, and we do. Conor is a guy who has stepped up and fought big fights on short notice, and I respect Conor very much as a fighter, and I like him, but you have to show up and do this stuff."

Asked if the Diaz-McGregor still could happen, White said, "I just don't see how that's fair."

With the Diaz-McGregor fight off as the main event at UFC 200, White said that it is "possible" that light heavyweights Jon Jones and Daniel Cormier could fight in the event's headliner if Jones wins his fight Saturday against Ovince Saint Preux.