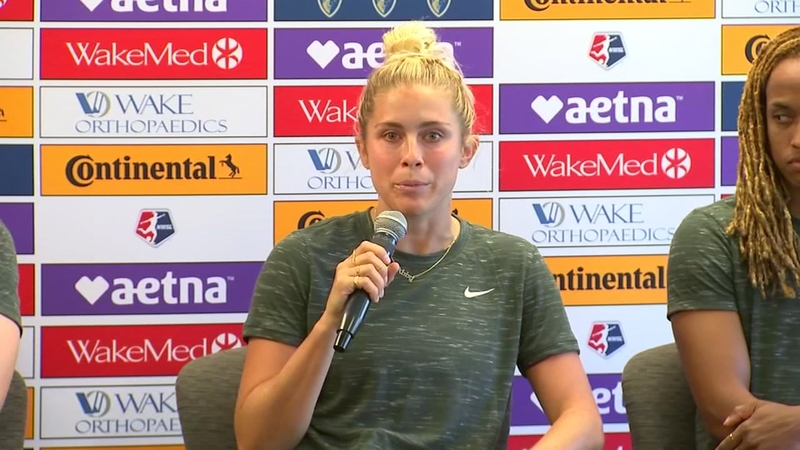 CARY, N.C. (WTVD) -- After winning the Women's World Cup and amid the fight for equal pay, the four players who represented the NC Courage on the U.S. Women's National Team are back home in the Triangle and inspiring the next generation.

"This is the start of something big, something historical," said Jessica McDonald. "And this is something these little girls want to be a part of."

McDonald along with Crystal Dunn, Samantha Mewis, and Abby Dahlkemper got back to training with their Courage teammates in Cary on Tuesday.

"Everybody looked so sharp and it was absolutely amazing to just be out there and to play with our Courage teammates," McDonald said.

"Being able to play before the World Cup on this team and get games under my belt definitely helped," Dahlkemper said.

The players said they're enjoying the comforts of home after coming off a whirlwind -- hoisting the World Cup trophy in France, riding in their own ticker-tape parade through Manhattan, then flying to the ESPY's in Los Angeles that night.

Now, it's back to work as the Courage prepares for its match against the Chicago Red Stars on Sunday.

"It's given me a whole new appreciation for the game and for what I can bring to the game," Mewis said. "I'm just antsy to get back out there."

Steve Malik, owner of the North Carolina Football Club said as the USWNT is coming home to new sponsorships for the National Women's Soccer League and sell-out crowds, NCFC is taking another step forward with plans for the $1.9 billion Downtown South development.

"We think these women deserve the best facilities in the world, that we need to invest in them," he said.

Downtown South would be anchored by a 20,000-seat open-air soccer stadium.

NCFC is footing the bill for research group Urban Land Institute to visit Raleigh in mid-August to talk plans with city and county leaders, Malik said.

"Even greenways, transit, affordable housing, workforce housing, we want to engage in all these areas and for a development this big, that's the right thing for our community," Malik said.

In the meantime, the athletes said they'll continue their fight off the field for economic equality.

"There's just so many ways that money can actually be beneficial," said Dunn. "It's not only money in pockets; it's facilities, it's gear, it's really just anything that makes you feel like a true professional."

They're looking forward to bringing more world-class soccer to their youngest fans.