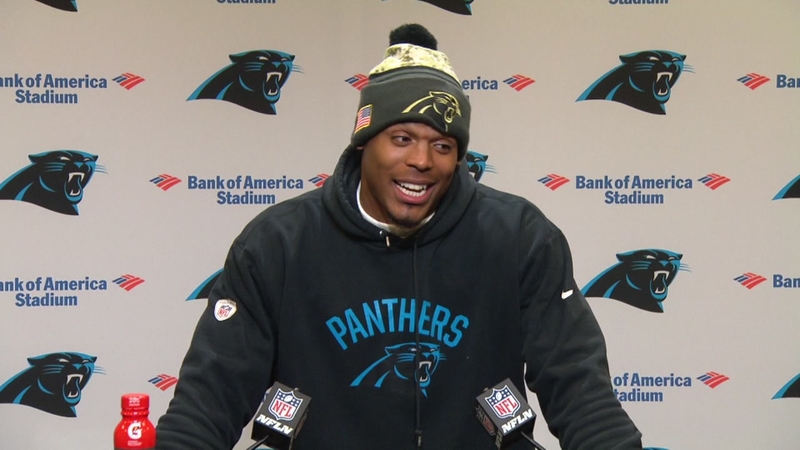 CHARLOTTE, North Carolina (WTVD) -- It was an emotional 24 hours for Carolina Panthers quarterback Cam Newton, from surprising a 10-year-old boy who has a life-threatening disease to hearing that longtime NFL special-teams coach Bruce DeHaven had died of cancer.

"Who am I to question God's doings? You just have to look at it as these are unbelievable people, great people."

Newton got a huge hug from the boy

Deckard and DeHaven helped put into perspective what Newton has called a "demoralizing season,'' in which the Panthers are 6-9 just one season after going 15-1 and reaching the Super Bowl. Newton spent most of a 19-minute news conference on Wednesday talking about the two moments that recently touched his life.

The visit with Deckard, in particular, had an impact on the reigning NFL MVP.

"I'm blown away, actually, in the hospital,'' Newton said. "I didn't know what to expect.''

Deckard -- wearing a No. 2 Auburn jersey, like the one Newton wore in 2010, when he won the Heisman Trophy and led the Tigers to the national title -- froze when Newton walked into the room.

Pulmonary hypertension is a disease that attacks the lungs. In Deckard's case, it has caused heart failure. He is set to have a procedure to install a stent in his heart on Friday.

"They're not sure if it's going to help, and it's a possibility he may not come out of it,'' Deckard's father, Tim, told ESPN. "He is a very sick kid. Like the doctors told us, it's as advanced of a case for as young as he is that they've ever seen.''

"It was better than anybody would even have expected,'' Tim Deckard said. "We weren't real sure it was going to happen, so it was a complete, utter surprise when Cam Newton walked through the door.

"For me, as a parent, that was one of the best things in the world, getting to see him that happy in that moment.''

The Deckards were living in Germany, where Tim wasstationed in the U.S. Army, when Austin became a Cam Newton fan. The base had access to only a few television channels, and Auburn games always seemed to be on one of them.

"Something about Cam Newton just caught him,'' Tim said of his son. "From then on, he's always been a huge Cam Newton fan.''

The road to Newton's surprise visit started last week with a post on social media from Austin's elementary school teacher, Courtney Cooper. She mentioned Austin's condition and how he hoped to meet his favorite football player.

"Austin told me he wished Cam Newton could come to his birthday party,'' Cooper wrote in her post. "Austin may not ever make it to an Auburn football game, but I know social media is a strong force that can make things happen."

Newton chartered a plane and flew to his hometown of Atlanta on a day off to make the meeting happen.

"When I go in there, he hugs me,'' Newton said with a smile. "It's the parent touch. You can't explain it. You can't really explain it. My heart falls for a child in any situation. I was just there to comfort him. It was something that happened naturally."

The NFL player and the sick child did everything from talk football to shoot each other with Nerf guns. Newton described Austin as somebody full of energy and joy. He also was touched by the strength of the family, particularly the boy's father.

"You have a strong man who will not let his son see him bat an eye," said Newton, who is expecting a second child of his own soon. "He has all the right words to say and all the comfort to give. And the mom is just as strong as he is, and they are just there for him.

"And it inspires me because I have kids. ... When (Austin) looked at his dad and he looked at his mom, he just knew everything was going to be all right."

He recalled how DeHaven always apologized for the "smallest things'' while coaching with the Panthers. He remembered a time in training camp when a punt return drill spilled over into a quarterback drill.

"Coach Bruce came after the period, came running, and said, 'I really apologize,'" Newton said. "You don't really see that soft side on the football field. For this to happen to him, I don't have the words to say.''

Back at the Atlanta hospital, Tim Deckard barely had the words to describe how appreciative he was of Newton's visit, which ended with the quarterback giving Austin a bracelet of beads, like the ones Newton wears on his wrist.

"One bead had water from the highest mountain in the world,'' Tim said. "Another had dirt from the deepest part of the ocean. (Cam) told him that's what keeps him reminded to stay focused. So he said, basically, stay in the game and keep your head up.''