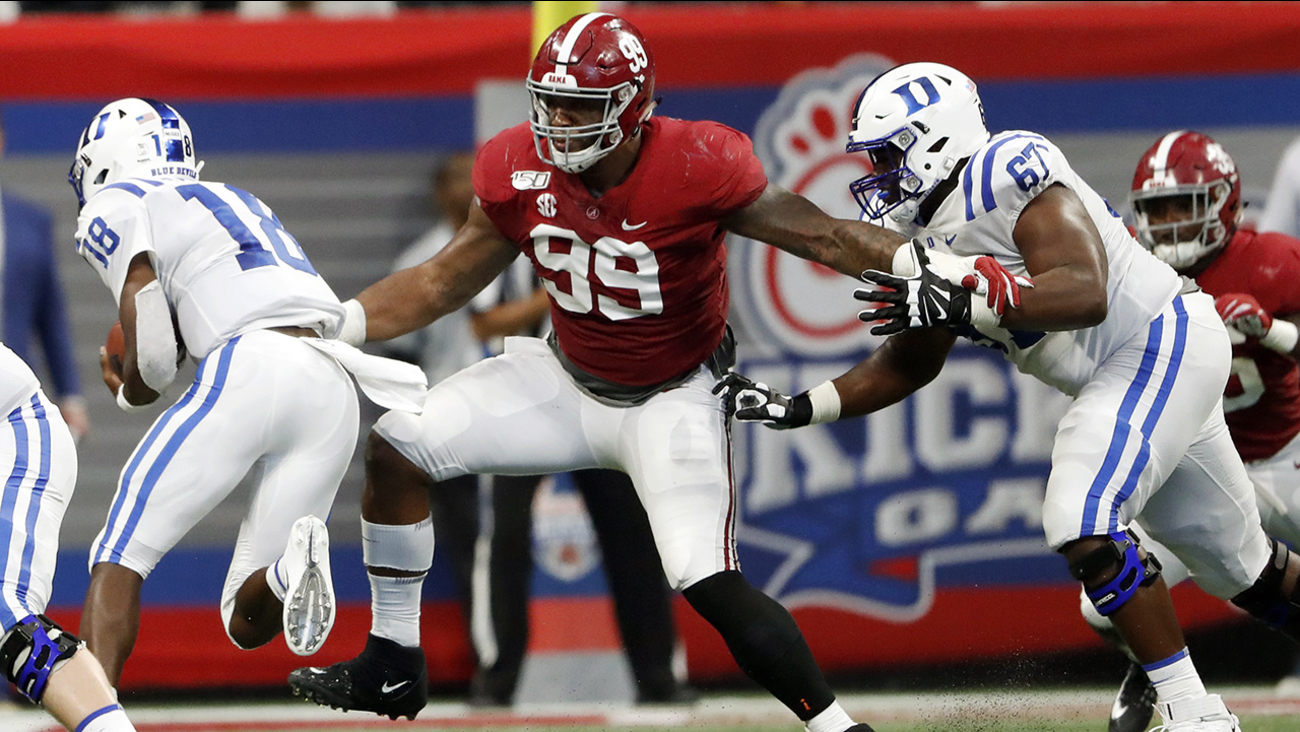 WTVD-AP
ATLANTA -- Tua Tagovailoa threw for 336 yards and four touchdowns as No. 2 Alabama overcame a sluggish start to blow out Duke 42-3 Saturday in the Chick-fil-A Kickoff Game.

Returning to the stadium where they won the Southeastern Conference title last December and the national championship two seasons ago, the Crimson Tide (1-0) was held scoreless in the first quarter - which happened only one time in 2018.

But the Blue Devils (0-1) merely delayed the inevitable.

Tagovailoa, whose brilliant sophomore season ended with a bit of a thud, put his tight ends to good use. The left-hander hooked up with Miller Forristall on a 27-yard touchdown pass and then went to Major Tennison for a 1-yard score

Alabama's dynamic receiving corps also got in on the fun. DeVonta Smith hauled in an 8-yard TD pass and Jerry Jeudy broke loose for a 21-yard score.

Jerome Ford and Brian Robinson Jr. ran for the Tide's other TDs.

With Alabama up 35-3, Tagovailoa's day was done by late in the third quarter. He completed 26 of 31 passes before giving way to backup Mac Jones.

Tagovailoa's younger brother, Taulia, even got a chance to play late in the game. He handed off to Ford on his 37-yard touchdown.

This was just the sort of performance Tua Tagovailoa and the Tide were hoping for after a blowout loss to Clemson in last year's national championship game. Tagovailoa was thoroughly outplayed in that 44-16 setback, on the heels of an ankle injury that knocked him out of the SEC championship game.

The Tide finished with a staggering 512-204 edge in total yards, and Duke simply made too many mistakes to have any shot at a monumental upset.

After recovering an early fumble deep in Alabama territory, the Blue Devils couldn't hang on to a potential touchdown pass in the back of the end zone before getting stuffed on fourth-and-1 at the 7. Duke was stopped on another fourth-down play early in the second half, basically its last hurrah, and three turnovers sealed the fate of the Atlantic Coast Conference school better known for its powerhouse men's basketball team.

Duke defensive tackle Edgar Cerenord was ejected in the third quarter when he stomped on Alabama lineman Landon Dickerson.

The two got into a scuffle away from the play, with both losing their helmets.

Dickerson was on the turf when Cerenord delivered the stomp in clear view of the officials. The Duke player was immediately flagged for a personal foul and thrown out of the game.

With Daniel Jones now in the NFL, the Blue Devils didn't show much offensively against Alabama's stellar defense. Quarterback Quentin Harris struggled as Jones' replacement, completed 12 of 22 for 97 yards with two interceptions. The running game wasn't much better, managing 107 yards.

There wasn't much for coach Nick Saban to complain about as his team won its eighth straight neutral-site game to begin a season. If there is one area of concern, it's the kicking game. After beating out Joseph Bulovas for the job, Will Reichard clanked a 49-yard field goal off the right upright and missed again from 48 yards.

Next for Duke, the Blue Devils take on North Carolina A&T in their home opener
Report a correction or typo
Related topics:
sportsgeorgiadurhamduke blue devilscollege football
Copyright © 2020 ABC11-WTVD-TV/DT. All Rights Reserved - The Associated Press contributed to this report.
COLLEGE FOOTBALL 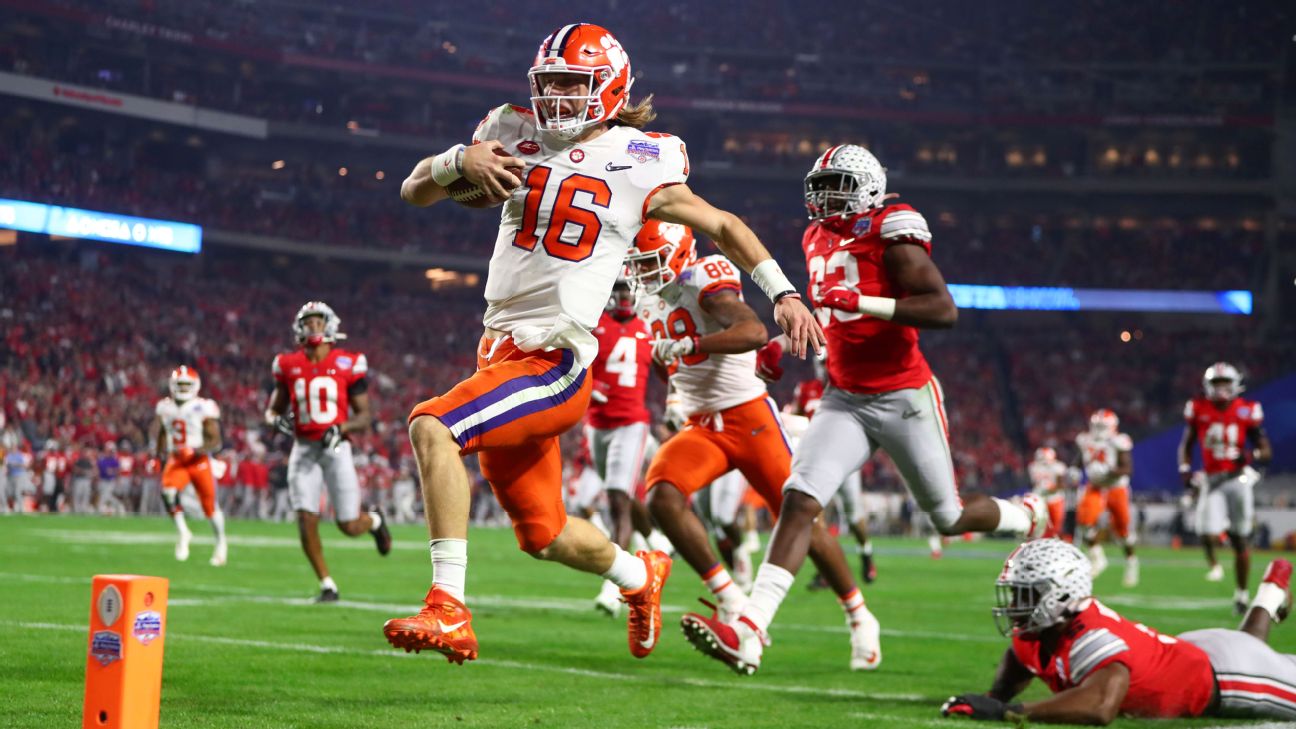 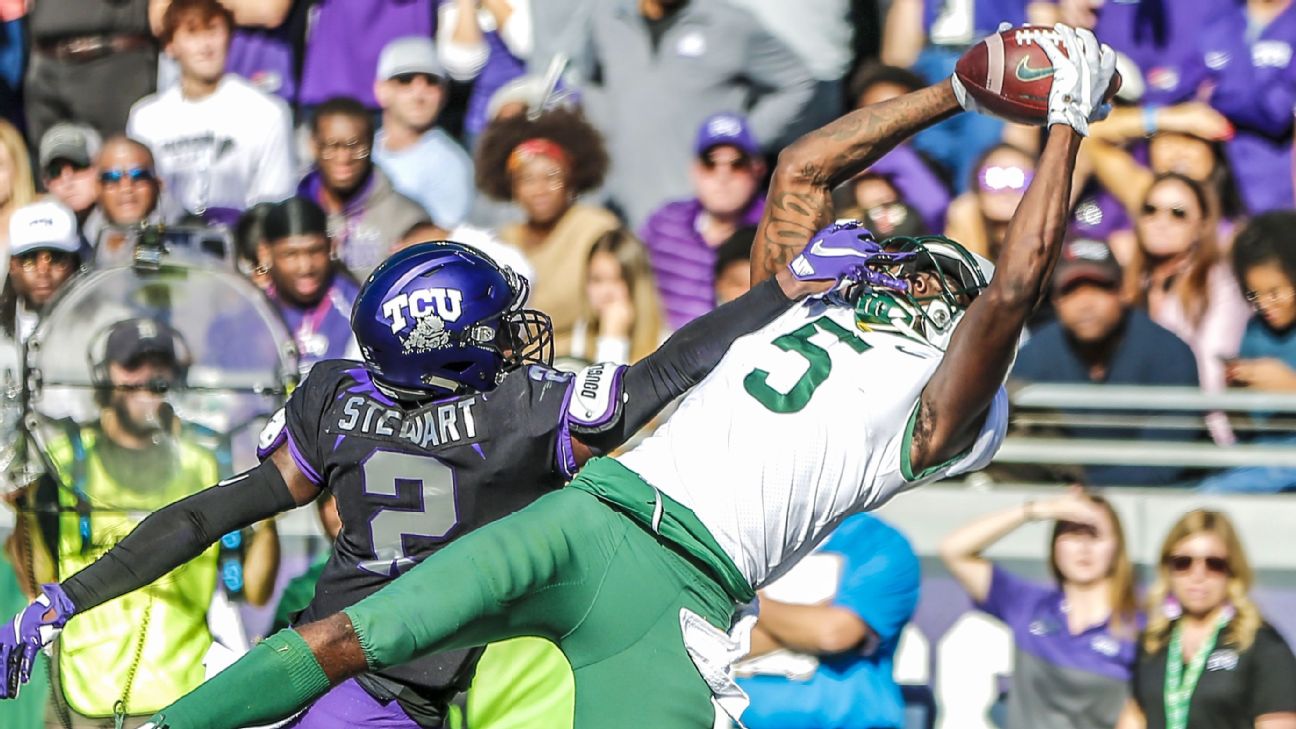