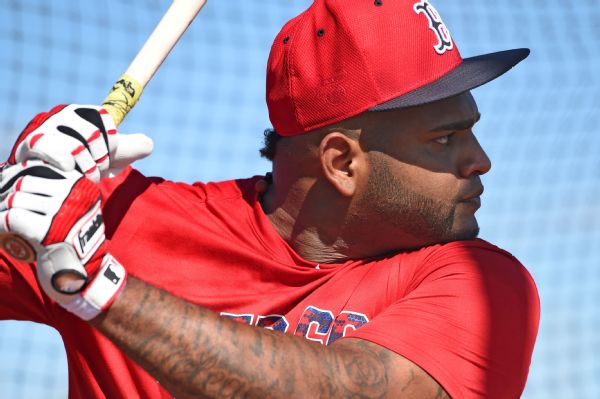 ESPN
By Scott Lauber
Pablo Sandoval says he isn't proud of what he has become over the past two years and insists he is ready to make the most of the second chance he's about to receive.

In a joint English-Spanish interview with ESPN.com and ESPN Deportes' Marly Rivera, Sandoval said he got "complacent" after signing a five-year, $95 million contract with the Boston Red Sox in November 2014 and pledged to "start my baseball career all over again" now that he is fully recovered from left shoulder surgery.

"My career had fallen into an abyss because I was so complacent with things that I had already accomplished," Sandoval said by phone in his first public comments since August. "I did not work hard in order to achieve more and to remain at the level of the player that I am and that I can be."

A wildly popular three-time World Series champion and two-time All-Star with the San Francisco Giants, Sandoval has been a bust with the Red Sox. Since the beginning of the 2015 season, he has batted .242 with a .290 on-base percentage and 10 home runs, lost his third-base job and fallen out of shape to the point that he popped his belt while taking a big swing in an April game against the Toronto Blue Jays.

Rock bottom came in early May, when well-known orthopedist Dr. James Andrews operated on Sandoval's shoulder. The surgery ended a season in which Sandoval started only one of the Red Sox's first five games and went 0-for-6 with four strikeouts.

But the lengthy recovery gave Sandoval time to take stock of how far he has fallen since catching the final out of the 2014 World Series. He came this stark reality: If he didn't change his ways, he was going to find himself out of the game at an age (he turned 30 in August) when he should still be in his prime.

"Things definitely happen for a reason," Sandoval said. "[The surgery and rehab process] have helped revitalize that fire in me to win again."

Throughout his career, Sandoval has struggled to stay in shape, gaining and losing weight with dramatic fluctuations. But since leaving the Giants, his weight gain greatly diminished his mobility and range at third base and contributing to a career-worst .658 OPS in 2015.

Over the past few months, Sandoval has shed "significant" weight, according to Red Sox president of baseball operations Dave Dombrowski. Neither the team nor Sandoval has divulged specifics, but after principal owner John Henry's widely derided comment this past spring that Sandoval's body fat was only 17 percent, the exact number is almost beside the point with two months left before spring training.

The proof, for now, is in a picture that circulated on Twitter this week. Sandoval, standing in front of the batting cages at the Red Sox's spring training facility in Fort Myers, Florida, looks almost svelte.

"I have been following a really strict routine that has taken a lot of dedication from my part," Sandoval said. "It has not been easy to wake up every single day at 6:30 in the morning to then head to the gym and start a full day of work. But you have to have that kind of dedication if you want to achieve the goals you have set for yourself."

Sandoval recently moved to Fort Myers to be closer to the Red Sox's training facility. He works out each day with team trainers, and although neither Dombrowski nor manager John Farrell has traveled to Florida to personally check in on Sandoval, they receive regular reports from the staff there.

Dombrowski and Farrell aren't guaranteeing that Sandoval will be the Opening Day third baseman. But the Red Sox this week traded two alternatives -- Travis Shaw to the Milwaukee Brewers for eighth-inning reliever Tyler Thornburg and top prospect Yoan Moncada to the Chicago White Sox in the Chris Sale blockbuster -- and said that 20-year-old Rafael Devers is bound for Double-A.

Save for a potential challenge from utility man Brock Holt, it will be Sandoval or bust at third base.

"I am not taking anything for granted," Sandoval said. "I am here to work hard. I'm not thinking about the position or not. I am starting from scratch, and I am here to show what I can do on the field."

The Red Sox also have not replaced the middle-of-the-order production they got from retired franchise icon David Ortiz. Instead, they agreed to a one-year, $5.5 million contract with first baseman Mitch Moreland, who will play primarily against right-handed pitching.

Asked how the Sox plan to balance out a lineup that leans heavily right-handed, Farrell brought up Sandoval.

"One of the keys for us is going to be Panda," Farrell said Monday, invoking Sandoval's "Kung Fu Panda" nickname that was earned in San Francisco. "That's not to put it all on him, but here's a left-handed bat who is a proven guy and has every opportunity to make a major impact on our team this year."

Sandoval made a faster-than-expected recovery from shoulder surgery. He said doctors cleared him to play in October, and he believes he would have been ready to rejoin the Red Sox if the team hadn't been swept in the American League Division Series by the Cleveland Indians.

But Sandoval's problems were more than physical. According to multiple people close to him, he dealt with several personal issues in 2015, including a dispute over his training program that caused him to leave longtime agent Gustavo Vasquez and stop speaking to his brother, Michael.

Sandoval and his wife had a baby in May, an event that he said has inspired him to rebuild his career.

"Watching 'Baby Panda' grow up and that he gets the opportunity to see his father play in the majors for seven, eight more years, to get back to the success I had, that's my motivation every day," Sandoval said. "The people that I surround myself with now and my family, they are the key to my success. This has been a life lesson."

Sandoval understands if Red Sox fans are skeptical. But Sandoval also saw first baseman Hanley Ramirez rebound this year with a 30-homer season after a miserable 2015 and believes he can have a renaissance of his own.

"I certainly get it. I understand all the frustration [fans] must have felt, and I can't hold any grudges," Sandoval said. "I have no ill will about anything. Actually the opposite. It was another lesson for me. It fueled me. It gave me the courage to work harder every day so one day I can be a part of another Boston Red Sox championship."