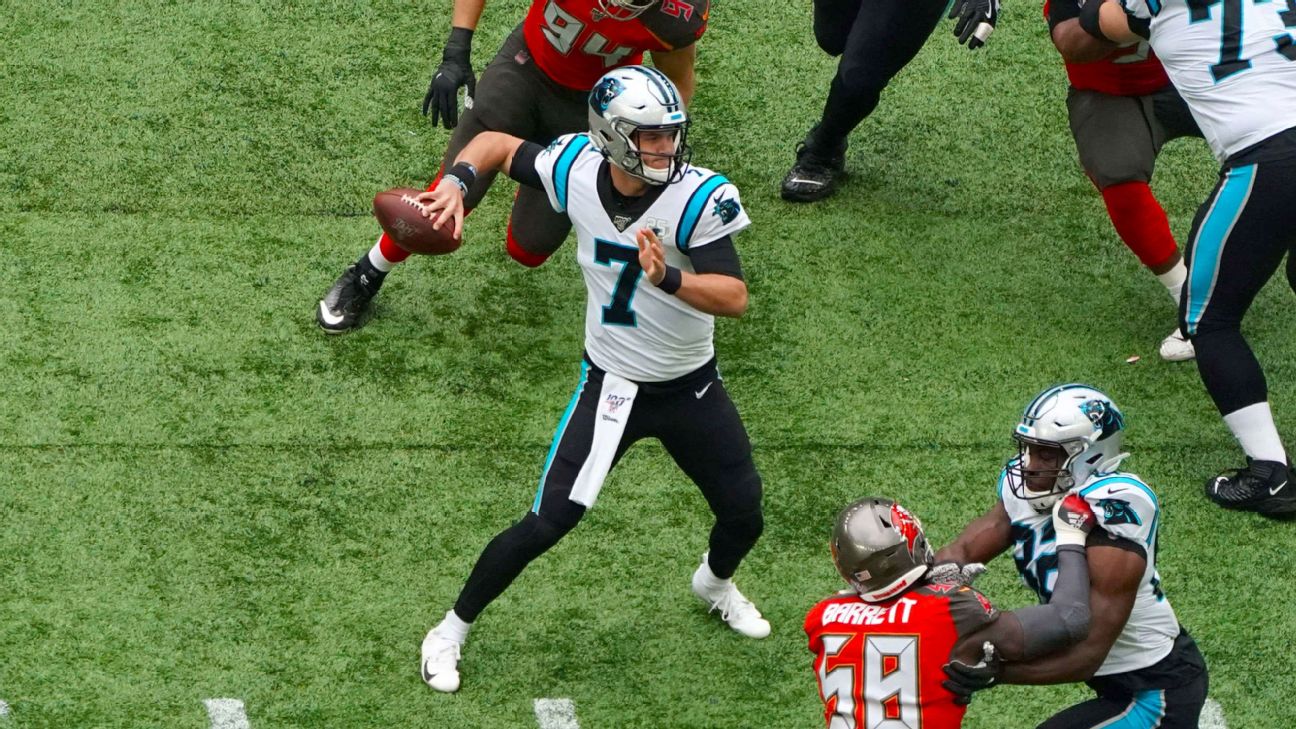 ESPN
By David Newton
LONDON -- Kyle Allen is making the decision on whether to speed up the return of Carolina Panthers franchise quarterback Cam Newton from a mild Lisfranc sprain a lot easier.

In Sunday's 37-26 victory over Tampa Bay, Allen became the seventh quarterback in the past 25 years to win his first five career starts, including four straight since Newton was shut down after a Week 2 loss to the Bucs.

As they might say in the United Kingdom, the 2017 undrafted player out of Houston has put on a jolly good show to help the Panthers to a 4-2 record after an 0-2 start.

"It means we're winning a lot of games,'' he said of his accomplishment. "Hopefully, we win more.''

While Allen's play hasn't been spectacular, it's been solid enough that the Panthers can let Newton's injured foot continue to strengthen before he returns if they choose. With a bye this week, Newton will have had almost six full weeks without playing when Carolina next plays on Oct. 27 at San Francisco.

Coach Ron Rivera consistently has insisted there is no timetable for Newton's return, even when asked about the possibility of the 2015 NFL MVP coming back after the bye.

Allen wasn't into speculating, either. When asked what it will be like when Newton is ready to return, he deadpanned, "He'll be ready to return. I don't know.''

Allen hasn't had to be spectacular in part because of running back Christian McCaffrey, an early candidate for NFL MVP. The league's leading rusher coming into the day had a run-and-catch touchdown against the Bucs to give him nine for the season, the most in team history in the first six games.

The defense also has taken the pressure off Allen. Since the Week 2 loss, the Panthers have 23 sacks, including seven on Sunday. Their 27 on the season leads the NFL.

Carolina also had five interceptions and a fumble recovery against Tampa Bay, making Allen's job that much easier.

Allen's biggest mistakes before Sunday were four lost fumbles on strip sacks. He didn't have one against the Bucs, and he hasn't thrown an interception in his 5-0 start, something the other six quarterbacks to begin their career 5-0 can't say.

Allen had a passer rating of 104.4 against Tampa Bay, completing 20 of 32 attempts for 227 yards and two touchdowns.

"He's been very consistent for us,'' Rivera said. "He's made the plays we needed. It's a big part of why we felt so confident with the guys we had coming into training camp.''

Former Carolina running back DeAngelo Williams, who is in England as a team ambassador, told ESPN.com that the offense with Allen better suits what coordinator Norv Turner wants to do.

Turner has a history of running his offense through running backs such as LaDainian Tomlinson and Emmitt Smith. With Allen, for the most part, the offense is running through McCaffrey, even though he saw his streak of three straight games with 175-plus yards from scrimmage end against Tampa Bay.

Newton is a dual-threat quarterback unlike any Turner has had.

"I say this: They're not asking Allen what they ask Cam to do,'' Williams said Thursday. "That's why the team is different. This is a West Coast offense, so when [Turner] took this position, he knew he had to tweak his offense. With Allen, all they're asking him to do is throw the football and hand off to Christian.

But when Allen had to step up on Sunday, he did, completing five passes for 68 yards on a 99-yard touchdown drive that gave Carolina a 10-0 lead.

"That's a tribute to our offense,'' Allen said. "We have a really complementary offense. If they take one part of our game away, we can come out with another part of our game.'' 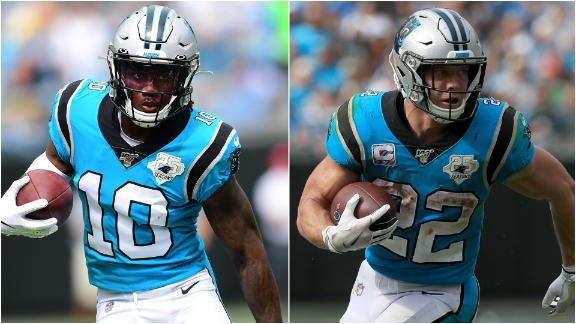