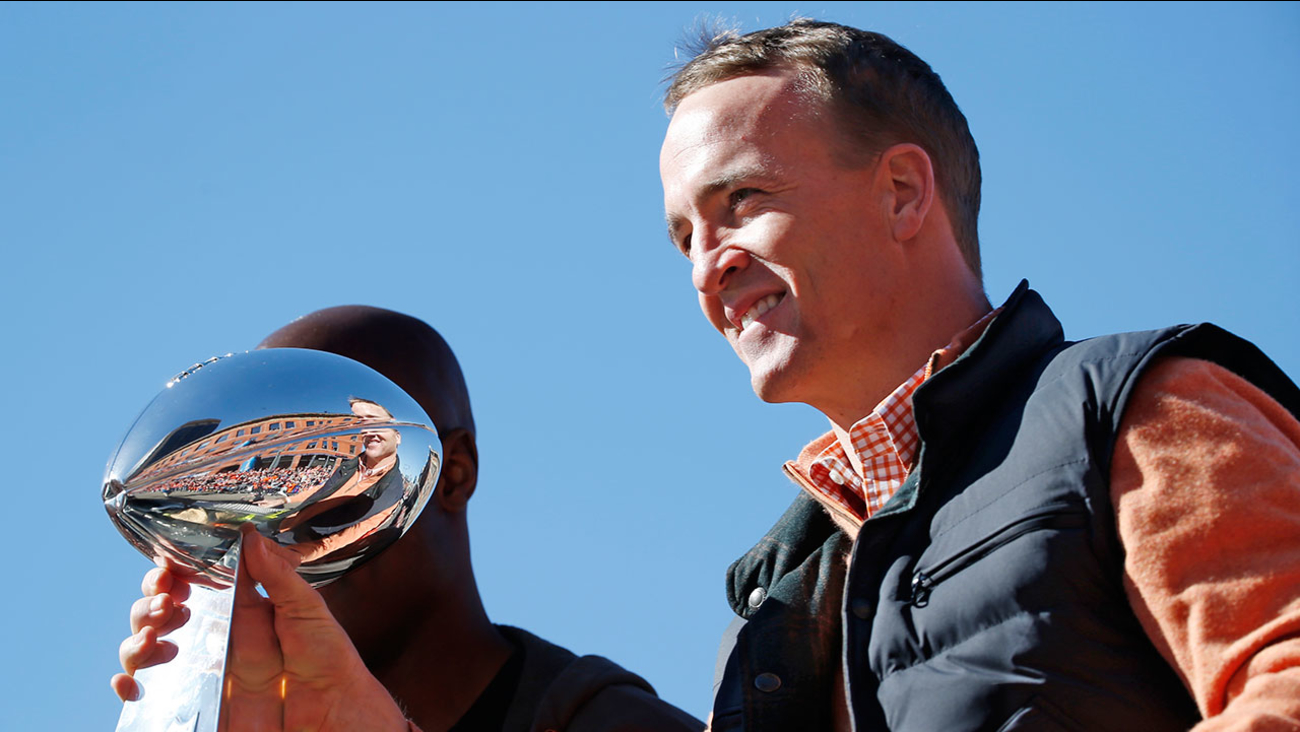 Five-time NFL MVP Peyton Manning will announce his retirement after 18 years during a news conference Monday at the Denver Broncos headquarters, a source familiar with the quarterback's decision told ESPN's Chris Mortensen.

The Broncos' Super Bowl 50 victory over the Carolina Panthers was indeed his last rodeo.

History will show the quarterback was in the NFL 18 seasons, made four Super Bowl trips with two titles, set a mountain of records and earned a place on football's Mount Rushmore.He will retire as NFL's all-time leader in pass touchdowns (539), passing yards (71,940) and quarterback wins (186, tied with Brett Favre).

Manning, who played 14 seasons with the Indianapolis Colts, was a first-ballot Hall of Famer-in-waiting before spinal fusion surgery caused him to miss the 2011 season. He went to the Broncos as a free agent in 2012 and authored the most prolific season of any quarterback in history in 2013. The Broncos made two Super Bowl trips in Manning's final three seasons.

When he embraced New England Patriots coach Bill Belichick after the Broncos' AFC Championship Game victory in January, NFL Films cameras captured audio of Manning hinting to the coach that the 2015 season would be his last.

"This might be my last rodeo. So it sure has been a pleasure," Manning said.

Manning was a five-time MVP, a Super Bowl MVP, a 14-time Pro Bowl selection and a seven-time first-team All-Pro. His team made the playoffs in 15 of his 18 seasons. He had 14 4,000-yard passing seasons, and of the three seasons in league history in which a quarterback threw at least 49 touchdown passes, Manning has two of them.

The final season of Manning's career was the "most unique" he has had in the league. He missed seven starts with a tear in the plantar fascia near his left heel. In November, Manning had a cast on his left foot; in December he was running the scout team; and by January he was back in the lineup for one more playoff run.

All the while there were reports, which he strongly denied, debating Manning's skills as a teammate and linking him to human growth hormone. The first report alleged he would refuse to be the backup quarterback. He called that "bulls---." Then Al-Jazeera America reported that HGH was allegedly shipped to his wife, Ashley. Manning repeatedly said the report was "garbage."

Manning also is among the athletes cited in a lawsuit filed by a group of women alleging that the University of Tennessee violated Title IX regulations and created a "hostile sexual environment" through a policy of indifference toward assaults by student-athletes.

The Tennessee lawsuit alleges that in 1996, when Manning was the Volunteers' quarterback, he placed his naked genitals on the face of a female athletic trainer while she was examining him for an injury. Manning has denied that he assaulted the trainer, saying instead that he was "mooning" a teammate. Manning was never the subject of a police investigation in the incident.

The trainer, Dr. Jamie Naughright, later sued Manning. In documents filed on her behalf in the case, the player whom Manning said he was "mooning," Malcolm Saxon, contradicted Manning's account.

Naughright's lawsuit against Manning was settled in 1997 with the agreement that she leave the university.

In the NFL, Manning's return from his 2011 surgery surprised many in the league. He could barely throw a football 10 yards when he began his recovery, and even after he signed with the Broncos in March 2012, there was enough uncertainty that the team used a second-round pick to select Brock Osweiler in the draft.

"What he's done, man, he's the greatest," Broncos cornerback Chris Harris Jr.has said. "Some people ... you have to say, 'You remember that guy?' and then you keep saying things. He's Peyton Manning. That's it. You just say Peyton Manning."

Broncos coach Gary Kubiak has worked with great quarterbacks throughout his career. He was the San Francisco 49ers' quarterbacks coach in 1994 and was the Broncos' offensive coordinator from 1995 to 1998 with John Elway as his quarterback.

"I like to say I've been blessed and fortunate enough to coach three Hall of Famers," Kubiak has said. "There's Steve Young, John, and they're in the Hall of Fame. And there's Peyton, and he's in. We all just have to wait a few years for it to be official."

Elway, now the Broncos' executive vice president of football operations and general manager, promised Manning he would do everything in his power to send him out with a championship. Elway also said he liked "to sign Hall of Famers with chips on their shoulders."

Beyond the numbers, the production and the fact he helped four head coaches reach the Super Bowl, Manning's legacy is that he put the game back into the hands of the quarterback. From the time the Colts made him the first pick of the 1998 draft and then-coach Jim Mora played Manning for every snap of his rookie season, Manning has been the man in charge.

Manning put both the Colts and the Broncos into the annual Super Bowl discussion.

Los Angeles Rams coach Jeff Fisher has likened facing Manning to "playing a computer who knows what you did before, what you're doing now and what you're planning to do later." Manning's recall of defenses, situations and plays -- he once gave detailed descriptions of the scoring plays of every player who caught just one touchdown pass from him -- was the stuff of football legend.

"Peyton, he made me better. He made a lot of guys better," former Broncos and Colts wide receiver Brandon Stokley said. "We would have made the NFL probably, but Peyton made us all better. We were more because we played with Peyton Manning. And just think about how many guys can say that."

Manning operated with complete freedom at the line of scrimmage. His 14-year career with the Colts resulted in a new stadium and the Midwestern city's selection to host a Super Bowl.

A sought-after pitchman off the field, Manning put the No. 18 on countless passing hopefuls from coast to coast and will be enshrined in Canton, Ohio, when the Pro Football Hall of Fame's five-year waiting period is over.