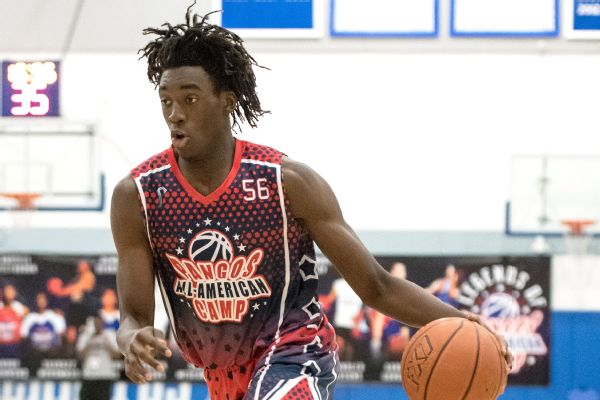 Five-star prospectNassir Little, whose recruitment by the University of Miami was called into question after the school and Little's AAU program director were linked to a widespread fraud and corruption investigation that rocked college basketball, denied under oath Friday allegations of bribery and misconduct levied against the Hurricanes' coaching staff, according to a report by the Miami Herald.

The federal probe -- which led to the arrest of 10 men, including Little's AAU director,Brad Augustine of 1 Family Hoops -- focused on coaches being paid tens of thousands of dollars to steer NBA-bound players toward sports agents, financial advisers and apparel companies.

"I state unequivocally that, with the exception of athletic scholarships customary to attendant to such recruiting, neither I nor my father, Harold Little, ever solicited or discussed a payment of any kind in exchange for my commitment to play basketball at the University of Miami or any school," Nassir Little said in an Oct. 13 sworn affidavit acquired by the Miami Herald.

"No corporate official or employee or AAU official or representative ever offered or so much as discussed any form of improper payment to myself or to any member of my family. Neither I, nor to my knowledge my father, ever spoke with [defendants] James Gatto, Merl Code, Christian Dawkins, Jonathan Brad Augustine or Munish Sood or AAU coach Darryl Hardin about improper payments or any payment at all. And certainly, no coach or representative of the University of Miami or any university had such discussions with us."

Little, a 6-foot-6 small forward, committed to North Carolina on Oct. 4, choosing the Tar Heels over Georgia Tech, Duke, Arizona and Miami. Arizona and Miami were considered the favorites for most of the past couple months, but Little said he removed them from consideration shortly after news broke of their involvement in the FBI's investigation.

"I just didn't want to be mixed in a situation where any of the accusations seemed like it was true. Because it wasn't," Little told ESPN after committing to UNC. "Every school I was considering was because I had a genuine interest in them. North Carolina had been the school I wanted, regardless."