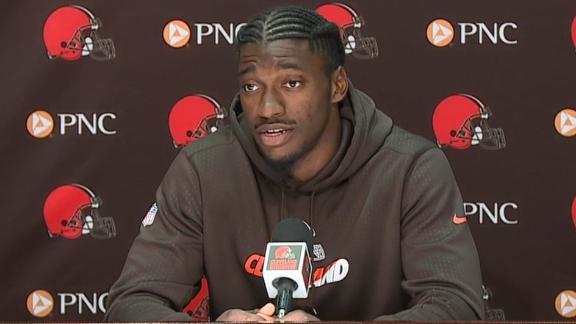 BEREA, Ohio -- Robert Griffin III's walk-off comment said it all -- of his attempt to revive both his career and the Cleveland Browns.

"No pressure, no diamonds," the Browns' newest quarterback said as he strode away from the podium after his introductory news conference in Cleveland. The only thing missing was the mic drop.

It's tempting to say that Griffin has no real idea what awaits him in Cleveland given that the Browns have had 24 starting quarterbacks since 1999. But he said he is thrilled to be with the Browns.

Griffin acknowledged that not playing a down in Washington last season was mentally taxing. He went from being the up-and-coming quarterback in the NFL in 2012 as the second overall pick in the draft to the third quarterback on his team.

"I've seen the great and I've seen the really bad in this league," Griffin said. "That's a very valuable piece of experience to have."

He wasn't ready to say he's been humbled, though.

Griffin promised he is healthy and refreshed from a year off and said he arrives hoping and expecting to start. The Browns have Josh McCown on the roster and the second overall pick in the draft.

But Griffin and coach Hue Jackson tried to deflect attention from one player being the key to the Browns' coming back from a miserable three-win season.

"I don't think our system is just about Robert," Jackson said. "Our system is about our offensive players."

Those who have watched the list of 24 starters might say that the quarterback is more important than both are admitting. Griffin was not biting.

"We're going to run the best offense that we can for the personnel that we have," Griffin said. "That's why they call him coach."

Jackson said when he spoke with Griffin before signing him that he asked many tough questions. The coach said he heard a lot of the right things, and Griffin explained one of the things he learned from the down times.

"When you lose, it is always you," he said. "And that's the way you approach the game. Even if you approach it that way to yourself, you have to be able to come in front of the mic and talk to you guys and say the exact same things. Because one little slip-up makes it a national story.

"I think that's what happened to me through my experience as a player in Washington. And I know that now."

Griffin: I have a massive chip on my shoulder
Browns QB Robert Griffin III explains how grateful he is to have an opportunity to continue his career in Cleveland, how he has learned from his past mistakes and if that has shaped him to become more humble.
Related topics:
sportsespnjosh mccownrobert griffin iiirobert griffinnflrg iiicleveland browns
Copyright © 2022 ESPN Internet Ventures. All rights reserved.
TOP STORIES
Man accused of killing 9-year-old in Durham on trial in federal court
Police investigating two shootings in Cumberland County
NC abortion legal battle looms amid standoff between AG and GOP
San Antonio migrant deaths lead to slow effort to ID 51 victims
Migrants in search of a better life continue to die on their journeys
Why you should pay down your credit cards right now
R. Kelly due in court for sex abuse sentencing in NYC
Show More
FDA advisers recommend updated COVID booster shots for fall
Fort Bragg soldiers reunite with families after deployment
Fourth of July 2022 will cost families more this year
NC GOP unveils state budget; House backs Medicaid expansion path
2 Raleigh women shot while on business in California
More TOP STORIES News