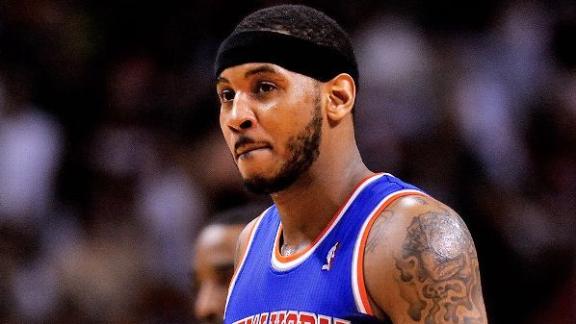 If Hall of Famer Oscar Robertson were advising Carmelo Anthony, he'd tell him to leave the New York Knicks this summer.

"I would leave today [if I were Carmelo]," Roberston said on SiriusXM NBA radio Thursday. "... Let me tell you why: wherever that kid has gone, when he was at Denver, they had a team that fooled around with the ball, fooled around with the ball, then all of the sudden when they needed a basket, threw it to Carmelo. Then, when he shot the ball, they said he shot too much. Then when he didn't shoot they said he didn't shoot enough.

Anthony has said that he will opt out of the final year of his contract and test free agency this summer. The Houston Rockets, Chicago Bulls and Los Angeles Clippers are among a group of teams expected to show interest in Anthony.

Robertson thinks Houston would be a perfect fit for Anthony, who was second in the NBA in scoring last season and pulled down a career-high 8.1 rebounds per game.

"If he goes to Houston, they're gonna win everything," Robertson told host and well-known Knicks fan Spike Lee. "You look at LeBron [James], LeBron's got a great game and the kid down at Oklahoma, [Kevin] Durant's got a great game -- they can't out-shoot Carmelo. ... I've seen him in a lot of basketball games over the years and I'm telling you right now the kid, he just can get that shot away. Now he's gotten smarter, he's going to the basket a lot. But what gets me is that everyone thinks that everything that happens bad is his fault."

Anthony has said that his top priority is to re-sign with the Knicks. But he'd also like to have assurances from Knicks president Phil Jackson that the team is committed to building a perennial contender around him before he re-signs.

Anthony suggested in February that he would take a pay cut to remain with the Knicks. Jackson on Wednesday said he hopes the All-Star forward follows through with that idea.

"I think [there is] a precedent that's been set," Jackson said of stars taking less money to join or remain with contending teams. "Because the way things have been structured now financially for teams is that it's really hard to have one or two top stars or max players, and to put together a team with enough talent, you've got to have people making sacrifices financially.

"So we hope that Carmelo is true to his word and we understand what it's going to take, and we will present that to him at that time."

Anthony has been complimentary of Jackson since the 13-time NBA champ took over as Knicks president last month.

He called the Knicks' hiring of Jackson a 'power move' in March.

"Let me ask you: When was the last time Phil Jackson played? ... I think Phil is great to have gotten $12 million out of [Knicks owner Jim Dolan]. Super job. Take the money and run," Roberston said. "If I were Carmelo I would say, 'Listen, I'm not gonna stay here and take all this gruff and all this criticism. You got other guys on this team making $12, $15, $16 million and doing nothing, and here I am averaging 28, 29 points per game.' "

Regarding a pay cut, if Anthony took less money to re-sign with the Knicks this summer, it wouldn't help the team's cap situation for 2014-15.

Unless Anthony takes a significant pay cut, the team is expected to be over the salary cap thanks in part to commitments next season to Amar'e Stoudemire ($23.4 million), Tyson Chandler ($14.6 million) and Andrea Bargnani ($11.5 million).

Anthony can sign a max contract worth $129 million over five years. If he signs with another team, the maximum he can earn is $95.8 million over four years.

Robertson: Melo Should Leave Knicks
Ian Begley discusses why Oscar Robertson recommends that Carmelo Anthony should leave the Knicks and why he would be a good fit with the Houston Rockets.