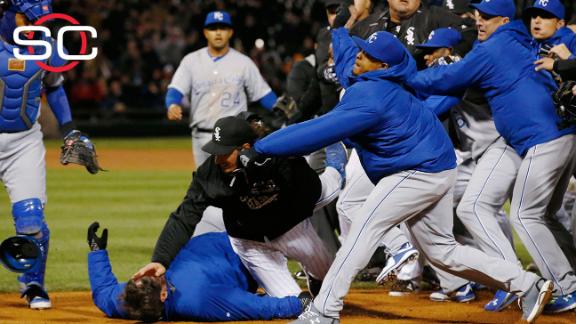 In the aftermath of Thursday's brawl between the Kansas City Royals and Chicago White Sox at U.S. Cellular Field, six players have been suspended and a seventh has been fined for their roles.

"We understand that Major League Baseball has to do what they think is fair in situations like this," Yost said in a team release. "Now, we just have to wait for the appeals process to play out."

Herrera is already awaiting an appeal on a five-game suspension that was handed down after he threw a pitch behind Oakland third basemanBrett Lawrieduring a series last weekend. Ventura was fined for hitting Lawrie with a 99 mph fastball during the same series.

For the White Sox, pitchersChris SaleandJeff Samardzija got five-game suspensions. Chicago catcher Tyler Flowers was not suspended but was fined an undisclosed amount, as were the players who got suspended.

White Sox general manager Rick Hahn said both Sale and Samardzija will appeal and make their scheduled starts next week in Baltimore.

"I think everybody had some elements of their behavior over the course of that incident, on both sides, that they wished they would have handled differently," Hahn said. "I respect the fact that our players stood up and took responsibility for their actions and expressed remorse."

In addition, White Sox right-handed relieverMatt Alberswill go on the disabled list with a compression fracture to a finger on his pitching hand, an injury that happened during Thursday's on-field incident.

Tensions between the Royals and White Sox had been building since the opening series of the season, when the teams combined to hit six batters.

But things didn't get ugly until Adam Eaton hit a comebacker at Ventura in the seventh inning. Ventura barked at Eaton before throwing to first base for the out, and television replays showed that Ventura and Eaton both yelled at each other on the play, leading directly to the fight.

Players from both dugouts and bullpens ran onto the field. Volquez whiffed while trying to throw a haymaker, and several other players threw punches in a fight that lasted several minutes.

White Sox manager Robin Ventura confirmed that Saleapproached the Royals clubhouse after the fight. Sale was believed to have banged on the visitors clubhouse door in the eighth, one inning after the brawl.

The Royals are starting to earn a fighting reputation after several incidents, including their two series with the White Sox and their tense three-game set with Oakland. Ventura also got into a heated argument with the Angels' Mike Trout during a series in Los Angeles.

During the A's series, the benches cleared in all three games after Lawrie slid recklessly into Royals shortstop Alcides Escobar covering second base in the opener. Ventura was ejected for hitting Lawrie in Game 2, and five of the Royals were thrown out of the series finale: Herrera, Escobar, Yost, pitching coach Dave Eiland and bench coach Don Wakamatsu.

While acknowledging that the Royals must do a better job of containing their emotions, Yost insisted his club has rarely been the instigator in any of the situations.

"Hopefully it's all behind us," Yost said Thursday night, "and we can move forward."

The Royals-White Sox game on Saturday was rained out. Because the suspended players are appealing, they are eligible to play Sunday and in subsequent games until their appeals are heard and ruled upon by MLB.

The teams played eight innings Friday night without incident, but the rest of the game was postponed with the score 2-2. It was supposed to resume Saturday, but more rain in Chicago means that it will now resume Sunday with the Royals batting in the top of the ninth.

John Danks is scheduled to start for the White Sox in the second game Sunday against Volquez.

No makeup date was announced for Saturday's game.