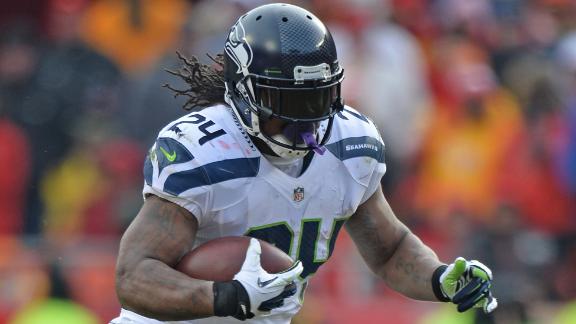 Seattle Seahawks running back Marshawn Lynch has been fined $50,000 for violating the NFL's media policy, the league said Wednesday.

In addition, the league will collect the $50,000 fine that was imposed on Lynch following violations of the media policy during the 2013 season but held in abeyance in anticipation of his future cooperation.

The NFL media policy mandates that players must be available to the media during the practice week at the team facility and in the locker room after all games.

Lynch quickly dressed and left the team's locker room after Sunday's loss to the Kansas City Chiefs, calmly walking away when reporters asked to speak to him. Lynch later did a phone interview with one reporter -- NFL.com's Michael Silver -- after leaving the locker room.

According to the media policy, "Star players, or other players with unusually heavy media demands, must be available to the media that regularly cover their teams at least once during the practice week in addition to their required postgame media availability."

"I thought I covered my bases by doing an interview after the game -- what I was told to do. If it wasn't good enough, then I don't know what to say," Lynch told ESPN's Josina Anderson after receiving news of the fine. "That's it. Now I understand it wasn't good enough for the league, or for whoever is fining me."

When asked whether he was going to appeal the fine, Lynch told Anderson: "Matter of fact, I am about to get on the horn with my agent right now and see what's up."

Lynch sat and talked with a group of reporters Wednesday in front of his locker. Lynch, however, did not talk much about football issues.

"Why all y'all crowding around me," Lynch said as reporters came to his locker.

Lynch talked about his shoes and his favorite rap singers for most of the football questions he was asked. Lynch would not say why he stayed on the field at halftime on Sunday at Kansas City when he was being treated by team trainers on the bench.

But tight end Cooper Helfet, who has the locker next to Lynch, said: "I thought it was a good idea. He needed to get some treatment on his back and he got it done."

Lynch was asked what he thought about Seahawks coach Pete Carroll's comments, who also said Lynch was being treated on the sideline.

"I don't know what he talked about," Lynch said. "I'm interested in y'all's take on it. What did you feel about it?"

"My cleats, it's a nice feel," Lynch said. "Right here in my inner sole, they put some heaters in here. It's pretty nice. It's a great feeling. And they put this little squiggly line here that looks like an M and an L for Marshawn Lynch. It's pretty nice. I like to play in these. These are nice cleats."

Lynch was asked whether he had any input into the design of his shoes.

"No, in this league you really don't have a lot of input in nothing, just your play," he said. "That's about it."

Lynch also was asked about the team setting the franchise rushing record two weeks ago (350 yards against the New York Giants), but only responded with statements about rap singers he likes.

Lynch was warned by league officials last week that he was subject to the fine if he didn't talk to the media after Sunday's game. It is Lynch's third fine for violations of the media policy.

Lynch previously spoke to reporters only once this season, after the Oakland game in Seattle on Nov. 2.

Player fines collected by the league are donated through the NFL Foundation to assist former players in need via the NFL Player Care Foundation and the NFLPA's Player Assistance Trust.

Marshawn Lynch Fined For Silence
Chris Mortensen discusses the news that Seahawks RB Marshawn Lynch has been fined $50,000 for violating the NFL's media policy, and the league will collect the $50,000 fine imposed on him following violations of the media policy during the 2013 season.