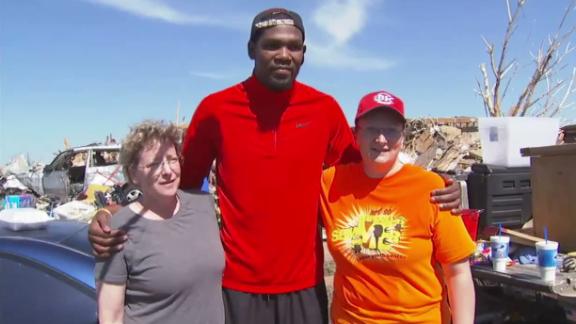 OKLAHOMA CITY -- Kevin Durant and his business manager, Rich Kleiman, are taking preventive safety measures as Durant heads back to Oklahoma City on Saturday for the first time as a member of the Golden State Warriors.

During what is expected to be an emotionally charged, contentious scene at Chesapeake Energy Arena, Kleiman -- who orchestrated Durant's free-agent meetings in the Hamptons in New York last offseason -- will sit next to Durant's mother, Wanda, sources said.

A group of security officials will be strictly assigned to ensure they are supervised and protected throughout the game, sources said.

The Thunder are not providing additional security at the arena for Saturday night's game. A Thunder official told ESPN's Ramona Shelburne that they are confident their normal security procedures will be adequate.

The Warriors will not have a shootaround, being that it's the second game of a back-to-back. However, Durant "won't be locked in his hotel room," a source said. He plans to venture out into the city to a certain extent, though how much is unknown.

Because of his tight travel window in Oklahoma City, Kleiman will make the rounds on Durant's behalf at the various foundations and organizations the superstar continues to support, a source said. Durant wanted to make sure that at least an extension of himself made an appearance while the Warriors are in town.

And to help further educate himself on the hostile treatment he might receive once he takes the court, Durant recently reached out to Rich Paul, the agent for LeBron James, league sources told ESPN.

James and Paul know firsthand what it's like to walk into a sold-out arena filled with jilted fans.

In the conversation, as relayed to ESPN, Paul stressed to Durant the importance of hiring additional security staff, keeping his emotions in check, monitoring his family's whereabouts, moving precisely in the arena and not reacting to insults. Paul also reminded him to show his appreciation to the city and organization and reminded him that as long as he's happy with his decision, he doesn't owe anybody anything.

Memphis Grizzliescoach David Fizdale was an assistant with the Miami Heat when James went back to Cleveland for his first game as a South Beach resident.

He said he doesn't think Durant's situation will be as bad as James had it.

"I remember coaching LeBron during a dead ball this close to each other and a battery flew between us," Fizdale told ESPN. "A nine-volt, and hit the floor. It was crazy. I don't think his situation is as volatile as that. And I think OKC fans, they're upset about it, but they got like a college fan base. They're just there to root their team on and really support their team. He's going to get booed, of course, but I don't think it will be as volatile."

Durant said he was most looking forward to reconnecting with the ushers, the arena security and the season-ticket holders. Those are the people who watched him grow as a person and who truly know him, he said.

When ESPN askedAndre Iguodala about whether safety would be a concern Saturday, he replied, "For me, it's just another game. I mean, if I'm supposed to die over basketball, I'm supposed to die. So I guess it's over with. But I'm not going to change my approach.

"If we didn't play basketball, they wouldn't give a damn about who we were as people. No one would invest any time in us [and] who we are. But I guess we give them an outlet or an escape from their lives. They're emotionally attached to us. But when we do things that aren't in their best interest, there's an action and a reaction. This is the case tomorrow. This is kind of the world we live in right now."

No one truly knows what to expect, but Durant and Kleiman have done their parts in attempting to prepare for the unexpected.

"I just wish Zaza [Pachulia] was playing," Green told ESPN with a massive grin. "'I'm going to get him back,'" Green mimicked, referring to Russell Westbrook making that comment last month about retaliating on Pachulia for laying him out with a hard collision and then standing over him.

Pachulia didn't make this trip because of a right rotator cuff strain.

"That's what I want to see," Green continued. "I wish Zaza was here." 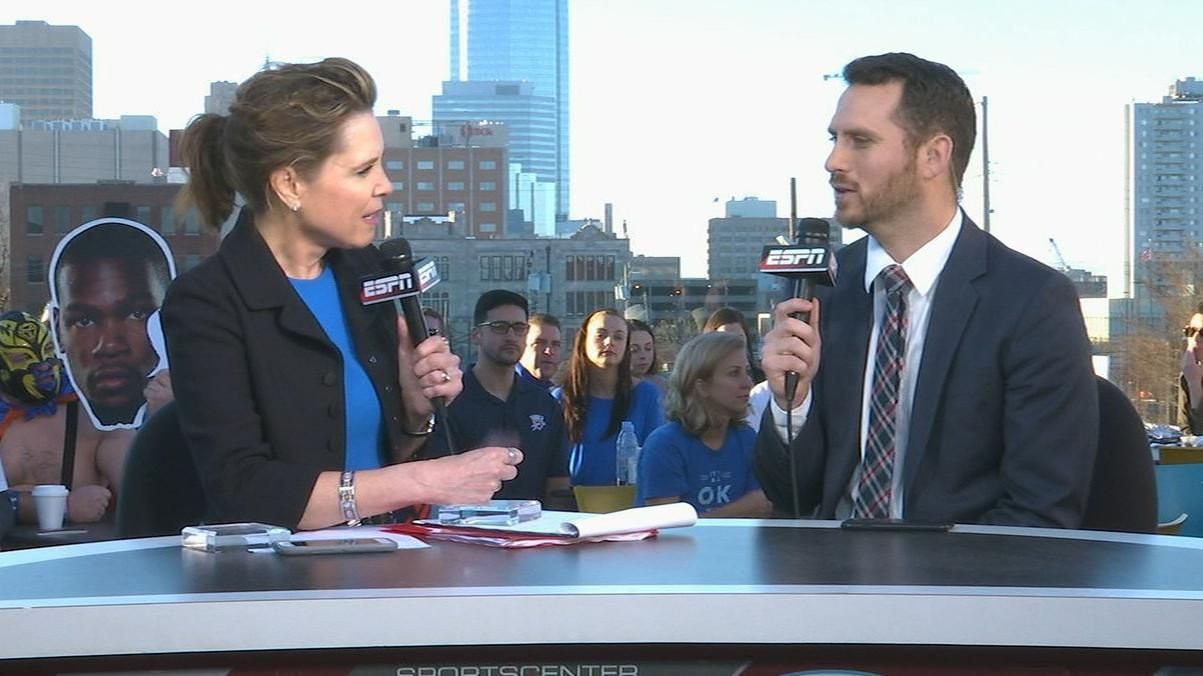 Thunder fans have opportunity to vent over KD
Royce Young examines what to expect during the Warriors-Thunder game and what the matchup means for Kevin Durant and Russell Westbrook.

Durant's move still stings around Oklahoma
Oklahomans share what it was like having Kevin Durant at the helm and how his constant community outreach changed the lives of many. Fans tell their stories about how it felt to have their hero move on to Golden State. 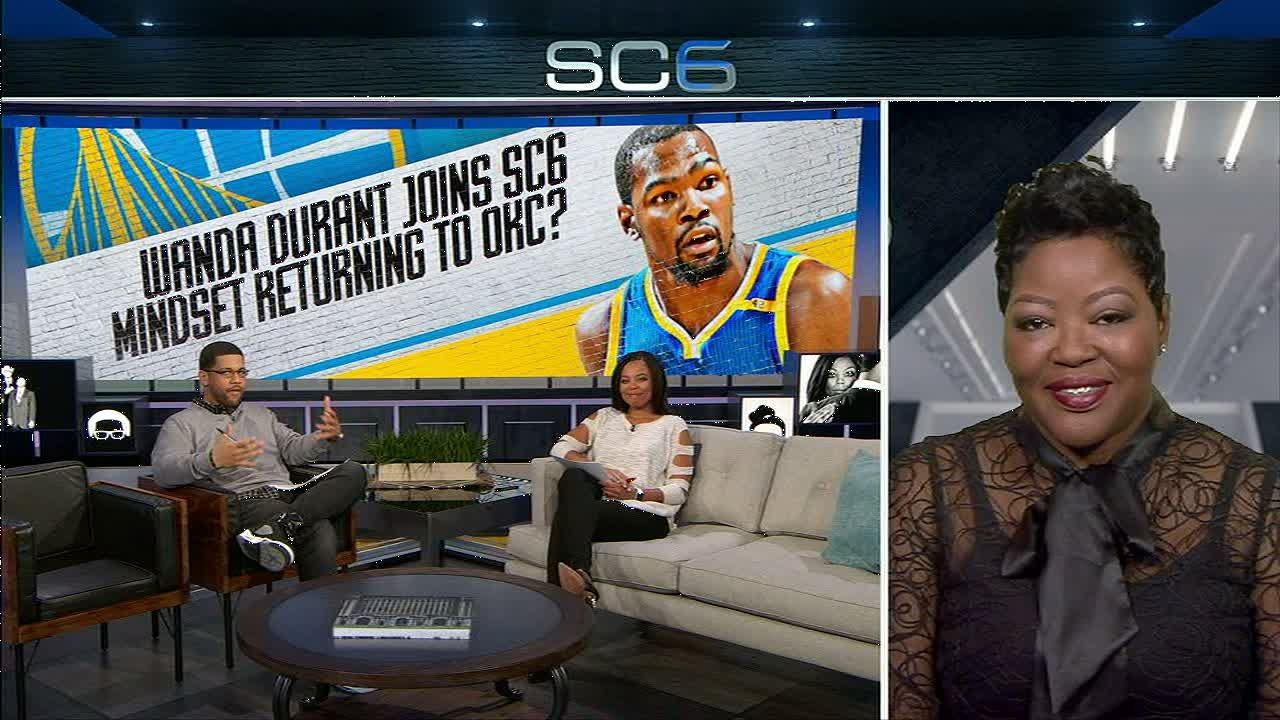 Wanda Durant supportive of Kevin's decision to play with Warriors
Wanda Durant joins SC6 to discuss her son returning to OKC, how she and Kevin handled criticism after his decision to join Golden State and whether she thinks his relationship with Russell Westbrook will ever be the same.
Related topics:
sportsespnoklahoma city thundersecuritygolden state warriorswanda durantkevin durantrich kleimannba
Copyright © 2022 ESPN Internet Ventures. All rights reserved.
TOP STORIES
Winter storm moves out, refreeze possible overnight
NCSHP reports 200 crashes statewide, urges drivers to stay home
Dozens of RDU flights canceled through Monday evening
Monday events canceled, postponed due to winter weather
Why do we get freezing rain instead of snow or sleet?
FBI identifies hostage-taker at Texas synagogue
How to drive on snow, ice and get out of a skid
Show More
Expect more worrisome COVID variants after omicron, scientists say
After Biden's first year, the virus and disunity rage on
Novak Djokovic leaves Australia after court rejects visa challenge
Ukraine claims Russia behind cyberattack in 'hybrid war'
Hostages in N. Texas synagogue 'out alive and safe,' Gov. Abbott says
More TOP STORIES News