Sources: Nuggets get Mason Plumlee in trade with Blazers 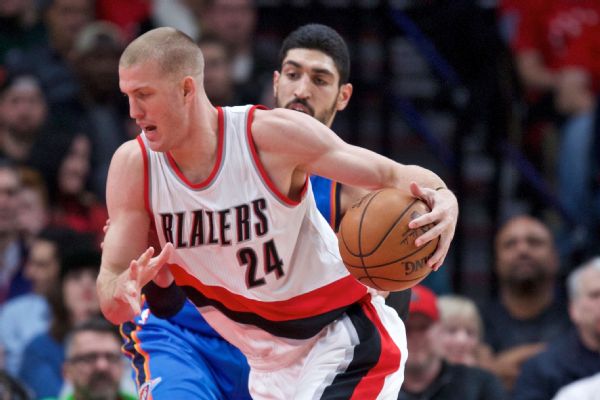 The Denver Nuggets are sending center Jusuf Nurkic and a first-round draft pick to the Portland Trail Blazers for center Mason Plumlee, a second-round pick and cash, sources told ESPN.com

The trade gives the Blazers potentially three first-round picks in this year's draft. The pick going from Denver to Portland is Memphis' 2017 pick, which is only top-five protected.

The Blazers acquire Nurkic, 22, a bruising big man who is averaging 8.0 points and 5.8 rebounds per game this season. He began the season as a starter but has been backing up Nikola Jokic, whom the Nuggets have decided is their center of the future. Concerns about Jokic and Nurkic meshing pushed the Nuggets into looking for a new home for Nurkic in recent weeks, sources told ESPN's Jeff Goodman.

Plumlee, who has started 54 games for the Blazers this season, is averaging career highs of 11.1 points, 8.0 rebounds and 4.0 assists per game. He is scheduled to become a restricted free agent this summer after not coming to terms on a contract extension last fall.

While the trade is not official, Nurkic appeared to confirm he was headed to Portland in an Instagram post.

The Blazers were facing heavy luxury taxes next year if they planned to re-sign Plumlee. Nurkic is under contract for next season at just $2.9 million.

The 6-foot-11 Plumlee, 26, was drafted by the Nets (22nd overall in 2013) and then traded in 2015 with Pat Connaughton to the Blazers for Steve Blake and Rondae Hollis-Jefferson.

The second-round pick going to Denver is a 2018 pick.

The Nuggets are currently holding on to the eighth and final playoff spot in the West, one game ahead of the Blazers.